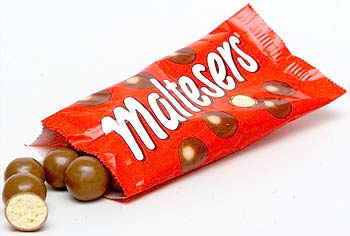 Maltesers: Does the Earth have a honeycomb centre like these sweets? (Source)

Russia Today reports that a major project is to be launched to investigate a mysterious huge hole that suddenly appeared in one of the most remote and inaccessible regions of northern Russia’s . It was unclear what had caused the gaping crater, about 100 meters in diameter, filmed from the air (see YouTube video below) in Yamal, which means “the end of the Earth” in the local Nenets language, where arctic temperatures winter temperatures regulrly plunge to -55 degrees Fahrenheit. Yamal, inhabited by indigenous reindeer herders, is one of Russia’s richest regions in natural gas.

The hole was found near the Bovanentsky gas field, leading to speculation that it could have been caused by an underground explosion. No Thor’s Hammer found as yet, not a secret passage to a ‘Stately Pleasuredome’ (where Aelph the sacred river ran, through caverns measureless to man, into a sunless sea – h/t Samuel Taylor Coleridge and Kublai Khan) in sight.

And, to the great disappointment of certain American conspiracy sites I like to look at, there was no evidence of an underground city built by The Nephilim millions of years ago, nor the secret headquarters of a megalomaniac, paraplegic, billionaire psychopath who rolls around in a nuclear wheelchair with a white Persian Cat on his knee as the plots to seize control of the world.
Other theories we are dismissing at this stage include Godzilla breaking loose from his thousand food deep tomb to terrorize Tokyo again, and the Norse Demon Angrbodr bursting out of Niflheim to summon the forces of darkness to Ragnarok , the final battle between good and evil.
So what caused the hole. Well I’m going to suggest that all the science and mythology up to now has been wrong and the planet is really a giant Malteser offered by the God Cronos to his consort Rhea. Or maybe not.

What I really want to know however is how can you be a helicopter pilot who shot that video and not want to go down that hole and hover to get a better look. Health and Safety issues I suppose. People are such wusses these days.