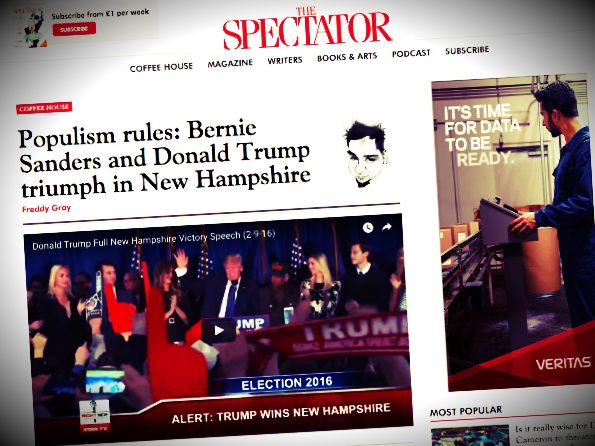 There was an almost audible sigh of relief from the political establishment last week when Senator Sen. Ted Cruz (R-TX) and posh lady Hillary Clinton (D-Blomingdales) won the US Republican and Democratic Party nomination contest in Iowa. The mavericks Donald Trump (Republican sort of) and Bernie Sanders (Democrat, sort of) who had led in opinion polls were beaten (in very dubious circumstances in the case of Sanders defeat by Hillary Clinton, who won the nomination because her campaign manager won 6 precincts on a coin toss by calling, correctly, HEADS each time. What are the odds against that.)

The British media, for the main part Obama worshippers since 2007, almost collectively orgasmed: “OMG Trump lost!” one headline read while others proclaimed that Sanders (only beaten on the six tossed of a double headed coin you must remember) was finished, his campaign was over.

Today in New Hampshire where both parties have a proper ‘primary’ election as opposed to a caucus a system that apparently chooses candidates by tossing coins, drawing lots, cutting cards or maybe in extreme cases, making the candidates have a fight, it was a different. UK media coalescing around the idea that Sen. Bernie Sanders (I-VT) and Donald Trump have “shaken up” the Presidential race.

That would be good headline, but it is too late. Sanders and Trump and the American public shook up the Presidential race when they announced their candidacies months ago, and the public, bored with machine politics and boring banality spouting half wits like Barack Obama and sickened by the self interest of Washington politicians, as Robert Burns might have put it, ‘bought and paid for with corporate gold’*.

This morning as Sanders’ and Trumps’ supporters celebrate their victories, nobody in the political establishment or the mainstream media can understand how this has happened.

The case is no one in the establishment media could predict this departure from the script because increasingly over the past forty or maybe fifty years Washington insiders and political  journalists have lived in a bubble, isolating themselves more and more from what the ordinaty punters think.

“Surely America will come to its senses?” has been the refrain throughout the run up to this Presidential election campaign. They cannot see that American voters have come to their senses, they have rejected the politically correct consensus that has made the two parties indistinguishable, they have rejected the back room deal making and the short term self interest of machine politics. They have voted for the outsiders.

Mainstream commentators cannot fathom why the “anointed ones,” candidates Jeb Bush (son and bother of former Presidents) and Hillary Clinton (wife of a former President), aren’t being propelled to victory by their politically correct, controversy avoiding banality and cynical attempt to appeal to minorities, disregarding the inteerests of those groups whose votes they take for granted.

Today, television and print news across the USA and around the world country have been forced to wake up to the idea that the tsunami of anti-establishment feeling surging through Europe as evidence by the rise of national interest parties such as France’s Front National, UKIP in Britain, AFD in Germany and the Sweden Democrats, all opposed to mass immigration and the further transfer of national sovereignty to unelected Bureaucrats, has reached the USA. There people have seen President Obama support terorists sworn to harm US interests, show contempt for the constitution, divide the nation racially and try to surrender sovereignty to the United Nations. Here’s how the UK media see it:

The BBC leads with: “Both candidates are riding on a wave of discontent with mainstream politics”.

The Independent says: “Outsiders Donald Trump and Bernie Sanders were handsomely rewarded by the voters of New Hampshire on Tuesday night – with predictions handing them huge wins over their establishment rivals”.

The Guardian reports: “Donald Trump, once an object of mockery and scorn by many in the political establishment, has won the New Hampshire Republican primary.”

The Daily Mail notes: “About half [of Republican voters] also said they want the next U.S. president to be someone who comes from outside America’s political ‘establishment.’”

From the Telegraph: “Maverick candidates Trump and Sanders rock US political establishment”.

The Huffington Post UK states: “Both winners peddle a strong ideological message at odds with the country’s political mainstream”.

But the Murdoch press wasn’t quite as conciliatory, after Mr. Trump declared war against his Fox News Channel by refusing to attend the debate in Iowa.

The Times front page proclaimed: “Donald Trump won the New Hampshire primary last night – the surest sign yet that voters are ready to put a billionaire former reality TV star with no political experience into the world’s most powerful executive position.”

*Such A Parcel Of Rogues In A Nation by Robert Burns