Following today’s Brazilian Senate vote, which endorsed by 55 votes to 22 the impeachment of corrupt, scandal tainted Dilma Rousseff, the disgraced president of the nation which is to host the Olympic Games in a few weeks, appealed to the public in a televised broadcast and condemned the move to impeach her as a “coup” and a “farce”, denying she has committed any crimes. If that was true shoe would be the first Brazilian leader who hasn’t.

Meanwhile, as Rousseff continues to fight for her political life, things in Brazil are already in turmoil as another controversial figure, vice president Michel Temer became interim president as soon as Ms Rousseff was removed from office. A few key points summarizing his rocky relationship with Rousseff courtesy of BBC:

The 75-year-old law professor who is of Lebanese origin was Ms Rousseff’s vice-president and was a key figure in the recent upheaval. he has been known as Brazil’s kingmaker, having helped broker coalitions for every president in the past two decades

He is president of Brazil’s largest party, the PMDB, which abandoned Roussef’s coalition in March. In recent months, his role has become even more influential; in a WhatsApp recording leaked in April, he outlined how Brazil needed a “government to save the country”.

There is an amusing and unconfirmed anecdote circulating about how Temer learned he had become president. It is being whispered the veteran politician fell asleep near end of 20 hr senate session, was awoken by fireworks and realized he was now president.

How long Temer may last as Brazil’s president is not something one should bet on. Not only has the 75 year old a wife aged only 32 who is a former beauty queen making it questionable whether his heart will hold out to the end of the week, he is almost as unpopular in the country as Roussef, and stained by scandals of his own.

Just like in the bureaucratic dictatorship of the European Union, where unelected politicians are thrust upon the public to quietly extend the pwer of the central bureaucracy, Vice President Michel Temer, who hasn’t won an election in his own right and is famed as a backstage wheeler-dealer. Though he has been in power less than a day, critics say plots to oust him are already being hatched.  AP frames the big question as follows: can he avoid ouster himself.

Among his documented transgressions, he signed off on some of the allegedly illegal budget measures that led to the impeachment drive against Rousseff and has been implicated, though never charged, in several corruption investigations. His wife is quite hot however. 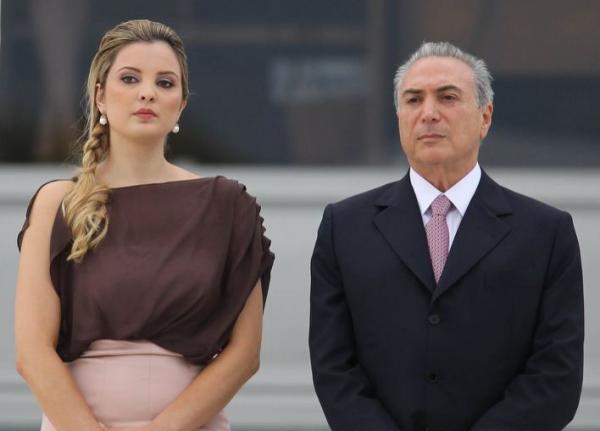