A leading German member of the European Parliament has warned that top EU negotiators frustrate Brexit in order to punish Britain and keep other Eurosceptic member-states in line as opposition to the Union’s authoritarian style of governance grows all around Europe.

Hans-Olaf Henkel, deputy chairman of the European Conservatives and Reformists Group – to which Britain’s ruling Conservative Party is aligned– claimed that Belgium’s former prime minister Guy Verhofstadt and France’s former foreign minister Michel Barnier “want to make a mess out of this whole unhappy situation” in an article published by The Times.

Verhofstadt, once described by UKIP’s Nigel Farage as “high priest” in “the temple of European federalism” by Brexit campaign leader is the European Parliament’s chosen representative in the Brexit negotiations. 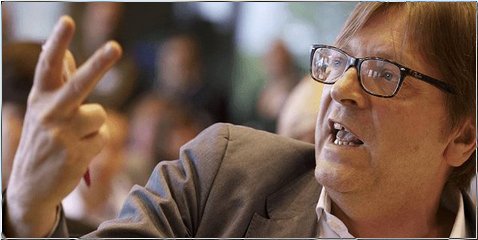 Barnier,  a former member of the unelected European Commission (Euronazis), as well as being Frane’s former foreign affairs chief, is the bloc’s chief negotiator.

“Mr Verhofstadt is an ambitious politician who wants to achieve a United States of Europe,” wrote Henkel, alleging that the attitude he typifies “was responsible in no small part” for the British public voting to Leave the European Union in June 2016.

“Mr Verhofstadt now wants to punish the British,” he continued.

“My impression is that Mr Barnier wants to do the same. The reason is simple. They would seek to make sure that Brexit is such a catastrophe that no country dares to take the step of leaving the EU again.”

Unfortunately many nations that are far more natural trading partners for Britain than the EU are falling over themselves in their eagerness to do business with British firms one we are free of the suffocating blanket of EU bureaucracy.

In Henkel’s estimation, failure to reach a reasonable separation agreement Britain would be “a terrible situation for us all,” he said, adding, “in Germany we value the ties we have with the British”. He probably means that German politicians are crapping themselves at the prospect of having to explain to German taxpayers just why they have to pick up the tab for the Union’s dept crippled ‘Club Mediterranean’ nations one the only other net contributor to the EU treasury has gone.

The UK will be the Eurozone’s single largest export market after Brexit, and Leave campaigner and former environment and rural affairs minister Owen Paterson MP has recently noted that Germany sold around 950,000 cars to British buyers in 2016 alone.

Other European leaders, such as Hungarian foreign minister Péter Szijjártó and Flemish minister-president Geert Bourgeois, have also said that attempting to “punish” the British would be damaging for the EU, with European exporters losing competitiveness and market share in the UK (mostly thanks to bureaucratic restrictions on trade and idiotic labour laws pushing up costs,)  as it reclaims its powers to conduct an independent trade policy and strikes deals with global economies such as Australia India, and the United States.

US Democratic Party presidential candidate Hillary Clinton launched a hysterical, irrational attack, filled with half truths and blatant lies, against the most prominent figure in the campaign to get Britain out of the EU (Brexit), UK Independence Party leader Nigel Farage, during a speech at a rally today. Mrs Clinton, responding to Farage’s address to a large and enthusiastic audience at a Donald Trump rally, may have been rattled at the prospect of having such a hihly effective campaigner in the rival camp …

Brussels went too far, they crossed the line in moving from an economic union to a political pan – European political empire. In the end it was a race as to which member state would quit first, Britain, Netherlands, Denmark or Italy. In the event it is Britain.

BREXIT vs. GREXIT – The Truth About The European Union And How It Treats Members

Unless the testicularly deficient politicians stand up for their nations he only thing that will halt the European Union’s push beyond Europe’s geographical borders to incorporate Asian, middle eastern and north African nations is war. Power is addictive and the bean counters of Brussels have ambitions far beyond Europe.

The Hypocrisy and Snobbery Of The Remain Campaign And The Antidote
When I had to defriend a Facebook contact because she was arguing in favour of the EU, it was not simply because I support Brexit that I had become pissed of with her, it was the snobbish and condescending way she dismissed supporters of LEAVE and their case. People are entitled to their opinion on the European Union, but they should check the ‘facts’ they post in support of their arguments.

The Labour Case For Brexit by Kate Hoey M.P.

After my short intro is a savage indictment by Brexit supporting Labour MP Kate Hoey of the way the Labour Party has abandoned the working class and is now trying to betray the party’s proud heritage and its roots in the industrial areas by taking Britain into an undemocratic, corporate controlled, capitalist friendly, elite dominated globalist control freak project.

Dutch Referendum This Week Shows why We Should Leave The EU.

Few of you were aware probably that there is an EU referendum vote in The Netherlands this week. As usual with anything negative about the EU barely a word has been printed in the topic in mainstream media and the silence from our notionally unbiased national broadcaster The Bolshevik Broadcasting Corporation (BBC) has been deafening.

Europeans want us British to lead them out of Europe. Don’t be fooled by project fear, the European Union (aka the Euronazi Federal Superstate) is falling apart. There will not be chaos if we leave, there will be chaos if we stay.

Head Of European Institute: Brexit â€˜Betterâ€™ For Everyone

Brexit would be the best result of Britain’s in / out referendum for both Britain and the EU i a Belgian professor who heads up the European Institute at the London School of Economics (LSE) has said.

Johnsonâ€™s article lines up his reasons why Britain must exit on June 23rd. Itâ€™s time to be brave

OK, I know a lot of you think Boris is most accurately described by a word many people find offensive, but heâ€™s put together a very good argument here on why we must leave the EU. Published in part here under â€˜fair useâ€™ terms and conditions, in the public interest …

Cameron Plays Deal Or No Deal In Europe

David Cameron, who was apparently up all night trying to make other European leaders understand why his country needs a better deal in order to poersuade the prople it is a good idea stay in the EU. Unless Cameron gets what will enable him to sell the idea of surrendering national sovereignty to a Federal European Superstate ruled by a committee of unelected bureaucrats in to the British public he will not campaign for the UK to remain in the bloc

Austrian Chancellor Werner Faymann said at the E?U summit on British membership terms that the European Union wants to reach an agreement with the United Kingdom, but it is not prepared to compromise the banking union (financial integration) or the further integration of monetary union (UK being forced to abandon the pound join the Euro?) to achieve this goal.