Skip to content
HomeHave They Learned Nothing From Iraq? 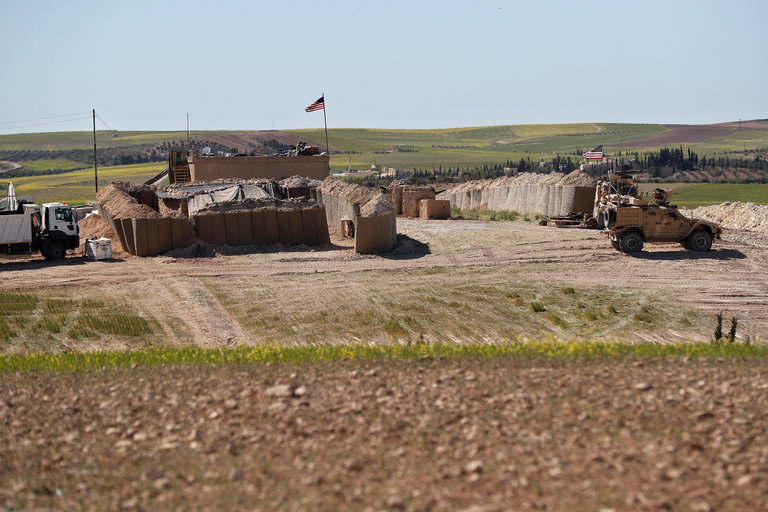 A U S outpost, near the front line between the U.S-backed Syrian Military Council and the Turkish-backed fighters, in Manbij, north Syria, Wednesday, April 4. (image source: NYT)

After the debacles of Iraq, Afghanistan and Libya, not to mention the unfinished business in Yemen, one might hope the political establishments and the mainstream media might have learned something about military interventions to effect regime change in third world nations which are culturally millions of light years away from the liberal democracies.

No such luck of course, as Trump tweets idiotic threats that will achieve nothing other than hardening the resolve of Assad’s allies to continue supporting the Syrian president and his regime, America’s major corporate cable news outlets, and the left leaning press, particularly so-called liberal networks like MSNBC or papers like The Washington Post, and national newspapers and broadcasters in the UK and Europe continue to uncritically provide political and military leaders with a massive platform to agitate for the escalation of what was always a US proxy war with Russia in Syria to a direct military confrontation, as President Donald Trump, having only days ago pledged to remove US troops from Syria, is now adopting a gung – ho attitude as he talks of launching a military attack on Syria.

Rational people  can only conclude  that establishment politcs and mainstream media has clearly learned nothing from the crucial role it played in cheerleading for the Bush / Blair led catastrophic invasion of Iraq in 2003.

“The push for escalation on TV is overwhelming,” Cenk Uyger, host of The Young Turks, observed in a tweet on Wednesday, reacting to the numerous instances this week of television hosts getting increasingly excited as they babbled of “Trump’s military options” with old lags like Iraq War supporter, retired Gen. Barry McCaffrey demanding the bombing of Damascus while refusing to question the underlying rationale for or legality of unilateral military action.Remember, while the presence of Russian or Iranian military personnel in Syria at the request of that country’s legitimate (yes legitimate, no matter how much some people dislike that fact,) government is legal, any NATO troops (even if they are really only advisers) on the ground represent an invading force.

“It’s incredible how readily the cable news channels have politicians on pushing for war in Syria with almost no questions asked about how disastrous it might be or the so-called evidence,” Uyger said. “They pretended to learn lessons from Iraq but have actually learned nothing.”

Mainstream media’s enthusiasm for another war, after the disaters of Iraq and Afghanistan indicates how alarmingly comfortable much of the mainstream press is with the idea that the president can just up and decide to initiate military hostilities whenever, wherever, and for whatever reason—even when there is no actual reason at all. It is also bizarre that the media, most of which presents itself as left leaning (cultural Marxist) on domestic issues has become so jingoistic since the advent of the Obama era when the president whose advance billing promised he would be the peacemaker and joybringer turned into the warmonger in chief almost as soon as he entered The White House.

What has been very noticeably missing from the discussion of Syria and the latest alleged chemical weapon incident on America’s TV networks in recent days, which one journalist described as “a parade of one war hawk after another,” has been any talk of alternatives to military action, let alone discussion about the implications of the only evidence the attack ever occurred coming from sources linked to ISIS / Al Nusra groups. Since the US, Britain and France (the FUKUS axis) have shown indecent haste in accusing Assad and Putin in all the previous alleged gas attacks, only to be told by independent inspectors there is no evidence of either being involved, with such evidence as does exist pointing to the attacks being the work of anti – Assad rebels, again we see an unwillingness to learn from experience.

What was it Albert Einstein said about the definition of insanity. Doing the same thing over and over again and hoping for different results. QED I’d say.

Syria was always a US Proxy war

One thought on “Have They Learned Nothing From Iraq?”