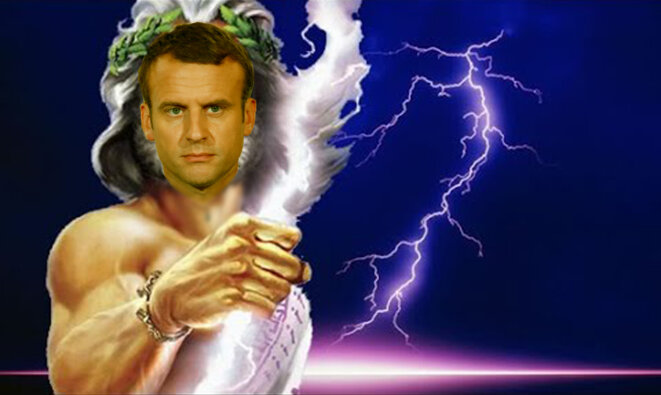 When Emmanuel Macron came from nowhere to be elected President of France
following a landslide victory a year ago, he pissed people off almost immediately by
telling journalists he would not answer their questions because they were not smart enough to understand his thoughts. Shortly after that he declared he would rule “in the style of a Roman god,” and compared himself to Jupiter, the Roman equivalent of Zeus or Odin. It’s no wonder then that just a year later the wheels have come off the bandwagon and the man, who was once seen as the saviour and deliverer of his country, a symbol of hope and renewal, seems to have turned into a source of mirth, widely ridiculed by the French for his grandiose posturing and inept efforts to deliver on his promises.

In early May 2017, Macron won the French presidential elections with 66.1 percent of the vote, one of the biggest landslide results in the history of the French Fifth Republic. A month later, his party, ‘Republic on the Move’ (LREM), scored another impressive victory by winning a majority of seats in the French parliament. It should be noted that these results were largely due to a stitch up, with France close to ruin after the disastrous socialist policies of former president Francois Holland, and Marine le Pen’s Front National party topping the polls only months before the election, the socialists and Gaullists (conservatives) combined to advise supporters to vote Macron, because Le Pen had to be stopped and the crumbling dream of a federal European superstate preserved at all costs.

Under the boy wonder’s stewardship it is now becoming clear those costs will be far greater than anyone imagined. Macron, while supporting the USA’s military interventions in the middle east, has thrown his weight behind more immigration and more Islamification for Europe, and following strong performances by Eurosceptic parties in German, Austrian and Italian elections, combined with growing resistance to the authoritarian attitude of Brussels towards member states, has called for acceleration of the push to political integration of the EU member states.

Some of Macron’s reforms so far have attempted to revive the French economy and increase the country’s competitive advantage on the international stage by targeting labor laws and social benefits. However measures such as a public sector pay freeze and making it easier for workers to be fired while also capping redundancy payouts have been disastrous for Marcon’s standing in popularity polls. The changes have also led to Marcon being dubbed The President for The Rich. The benefits and subsidies system is seen as  the foundation of France’s social and economic structure, and is guarded by powerful trade unions.

The reforms were also aimed at reducing the country’s high unemployment rate but as Macron insists on speeding up the admission of unskilled, illiterate migrants from the third world, it seems he is trying to solve one unemployment problem and simultaneously importing another.

A former Goldman Sachs investment banker, which was always going to ensure the left treated his every move with suspicion, Macron’s policies also angered students to the extent that they blocked several educational facilities across France, including the famous Sorbonne, in response to the government’s plans to introduce admission criteria and rank young people who apply to universities.

Meanwhile the powerful rail workers union began calling rolling rail strikes, which have severely disrupted train services throughout the country, with the goal of forcing Macron to rethink his plan for a major overhaul of state rail operator SNCF.

In the face of rising discontent with his government among all sectors of French society, Macron has maintained a god – like remoteness from public opinion as he drives ahead with a program of reforms which will prepare France for the transition to a province of Federal Europe.

His own party, however, which he formed only a year before the election as a stop Le Pen option when it became clear the traditional parties could not win, still accuse Macron of infringing upon worker’s rights and doing favors for corporate “bosses” at the cost of others.

Marine Le Pen’s bid to emulate the Brexit and Trump shocks and in the face of adverse polling figures win election a risked a setbacks President of France received a potentially damaging blow on Friday (April 28) when her deputy, who is currently leading the Front National (FN) party leaving Le Pen to focus on her campaign was forced to step down in order to defend himself against charges that he shares the views of Holocaust deniers.

As it becomes clear the Cameron Clowns and Euronazis of Brussels between them can only offer lies, misrepresentations and scaremongering to support their emotional desire to keep Britain in the EU and then make us part of a Federal European Superstate esxtending into Africa and the middle east, a spilt appears to be developing in the Sottish National Party as many senior figures think an ‘in’ vote would see Scotland regegated to irrelevance in Greater Germany.

You Know You Live In A Country Run By Idiots If …

We all know our countries are run by idiots, but how do we prove it? One way is to observe someone and record how many times they do something that will undo s
omething else they just did. Here are some examples:

Jews Fleeing From France In Record Numbers Because Of Antisemitism

We Are Living Amid An Islamic Threat”, French Mayor Says: “Our Country Is At War Inside Our Borders