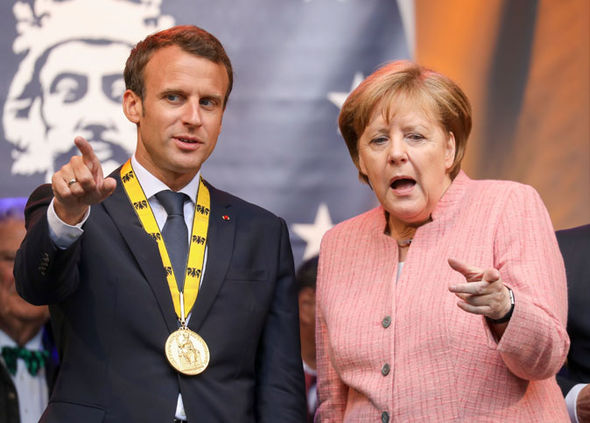 French President Emmanel Macron (40) whose wife is 25 years his senior seems to like them old (Picture: http://www.express.co.uk )

As you already know if you read my posts regularly, or follow the real news on alt_media, the European Union (aka the German Empire) is in big trouble, with more and more member states electing Eurosceptic governments and resisting the open doors immigration policy and the push to integrate all the sovereign states that make up the union into one single political entity, the Federal European Superstate (or Greater Germany).

Until recently German leader Angela Merkel had made her position clear on how the goal of a united Europe would be achieved, “It’s my way or the highway,” is what she has effectively said when Germany’s leadership of the Union was questioned.

Now however, in the face of increasing opposition to federalism, the surrender of member states sovereign powers to the Brussels bureaucracy and resistance to mass immigration, Hausfrau Volksfuhrer Merkel has been forced into a  U-turn, expressing support for French president Emmanuel (The Grandmotherfucker) Macron’s proposed EU reforms shows the German Chancellor desperately “needs” the French president as she attempts to hold the Brussels bloc together against public threats of a trade war from US President Donald Trump, and increasing scepticism among the public of scaremongering about the danger Russia poses to the EU and its people.

The German Chancellor had avoided showing support for Emmanuel Macron’s  plans to fastrack closer financial, political and military integration for the EU, including a joint army, until now.

But in the face of Mr Trump’s decision to pull Washington out of the Iran nuclear deal and slap tariffs on European steel and aluminium exports, Merkel appeared to have had a change of heart this week when she signalled her support for reform. Any talk of forcing political integration on Italy, Spain, Poland, Hungary, Slovakia or the Czech Republic will go down like the proverbial Lead Zepplin, while Eurosceptic Parties in France, The Netherlands, Portugal, Austria, Sweden, Denmark and Finland are gaining strength all the time.

This leaves small nations like Malta, Luxembourg, Latvia, Estonia and Cyprus and basket cases such as Greece, Belgium, Bulgaria, Croatia,  falling into line with the Franco – German power bloc. Not an inspiring line up is it.

Top economic power Germany is especially vulnerable to a trade conflict with the United States because of high volumes of German cars and engineering products to the USA. Several analysts said the threats from Washington had given the notoriously cautious Mrs Merkel added incentive to reach out to her French counterpart, a rather strange view as France is effectively insolvent and reliant on money printing by the European Central Bank to fund its deficit.

Laurence Boone, chief economist at Axa and a former adviser to French President Francois Hollande, said: “My sense is that Merkel needs Macron now. Germany, with its trade surplus and car industry, is the country that is most vulnerable to Trump.