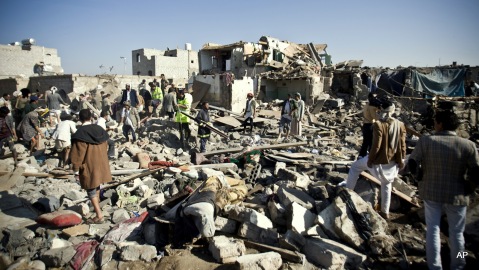 Yemenis move like ghosts through the wreckage of their homes (Source: www.mintpressnews.com)

The Saudi-led coalition attempting to restore Yemen’s former president Hadi to power have launched a final assault on Yemen’s main port of Hodeidah, the only entry point through which humanitarian aid can enter the beleaguered nation, midle eastern news services report.

The operation to drive the Houthi rebels from the port, after four years of relentless bombing on the impoverished Arabian nation by the oil rich Saudis and their Arab allies has been largely unreported by western media and such reports as have been published are heavily biased towards the Saudis. In fact the Saudis have been supported throughout their attempt to crush Yemen by the USA and NATO allies France and Britain (the FUKUS axis) providing advanced weapons and military technology and putting ‘advisers’ on the ground to train Saudi Arabia’s mainly mercenary army.

The attack on Hodeidah was launched on Wednesday morning, after the rebels rejected an ultimatum and refused to surrender the city by the end of Tuesday, a deadline set by the United Arab Emirates (UAE), Al Arabiya reports.

Large-scale troop movements, with air and naval support from the Saudi-led coalition, brought Hadi – loyalist troops close to the city from numerous directions, a military source told the publication. The government of the exiled president, based in Aden, issued a statement, claiming that the military operation was the last-ditch effort to “restore legitimacy to the entire national territory after exhausting all peaceful and political means to remove the Houthi militia from the port of Hodeidah.” While it is true that the Hadi government is the legitimate (if not democratically elected) government of Yemen is was the oppression of the country’s Shi’ite Muslim minority by Sunni extremists of the Wahhabi cult that triggered the rebellion.

The human rights screechers in the west ignored this oppression as, for the past four years, they have ignored what had become, increasingly obviously, a campaign of genocide by the Saudis and their allies, aimed at completely destroying the only significant Shia group on the Arab peninsula. The danger now is that the fall of Yemen’s last humanitarian lifeline will be a prelude to wholesale slaughter of Shi’ites in the country

And there the real reason for the war is revealed. Saudi Arabia wants to humiliate Iran and establish itself as the regions main political and economic power. Iran’s restraint so (they have given limited support to the Houthis, far may be due to their pacifist attitude but is more likely prompted by fear that armed conflict with western Allies the Saudis would prompt a direct response from the USA and NATO

Recapturing Hodeidah and its port is crucial for the Arab coalition. Over the course of the conflict, Riyadh has repeatedly tried to blockade the docks, accusing Iran of using them to smuggle arms to the Houthi rebels.

Just days before the operation to retake the port was launched, the United Nations warned that an attack on the heavily populated coastal are could result in up to 250,000 deaths and pleaded with the Sunni coalition to hold back and let international representatives seek a negotiated settlement. The response – total indifference – shows how toothless the UN has become as a force for peace.

It is not known how many Yemenis have already died in military attacks or of starvation and cholera in the four years of war, but throughout that time the Saudis and their allies have blockaded ports and airports to prevent food and medical supplies getting in, and deliberately attacked water and sweage infrastructure to exacerbate the spread of disease. In all that time hardly a word of protest has been heard from the west’s liberal media, yet thoughout the war they have been screaming about the brutality of Syria’s President Assad as his forces strove to defeat the westrn backed terrorists of ISIS. It seems there is a certain amount of hypocrisy involved in western foreign policy.