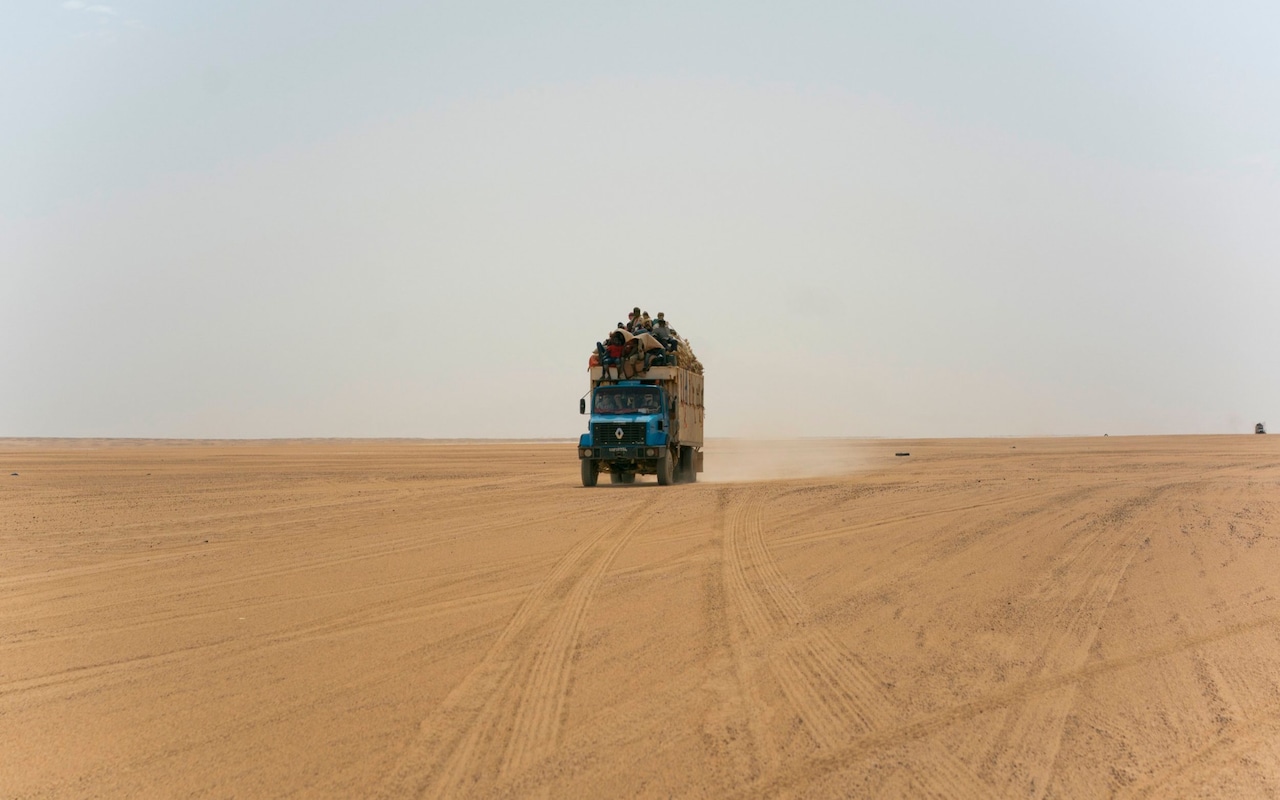 A truck loaded with migrants and their posessions crosses the Sahara. The wide angle lens used conveyes an impression of how emply and lifeless this place is.

Not far from the Algerian border, the infant gave up its fight for life under the punishing Saharan sun. “The mother, she is a friend of mine. Her baby passed away in the desert,” said Thomas Howard, a painter and decorator from the west African state of Liberia.

Mr Howard and his friend had migrated north to Algeria looking for work but were rounded up, beaten and robbed by Algerian security forces before being put in a truck, driven back south and dumped in the desert. They were told to start walking south through the dunes as their captors drove away.

Since September 2017, Algeria has halted more than 10,000 undocumented migrants en route for The Mediterranean and Eueope at its southern border, to trek for hours without food or water back to the scattered border towns and villages in neighbouring Niger where they are not welcomed with open arms by the impoverished inhabitants.

Most North African countries are cracking down on immigration in a bid to stem the flow of sub-Saharan migrants reaching the Mediterranean and ultimately Europe,, the burden imposed on society by these unskilled, uneducated travellers has triggered a crisis in wealthy Europe, but the effects on poor African cpuntries is forgotten. Now, in spite of all the virtue signalling rhetoric from western politicians the north African countries are taking step to cut off the flow at source, and they have received financial backing from Britain and the EU. A people smuggler in Agadez, Niger. He takes money for transporting migrants across the Sahara and into Algeria with the promise of a passage to Europe, then dumps them in the desert. Credit: Xaume Olleros (AFP)

As the numbers crossing the Mediterranean fell from 215,997 in the first six months of 2016 to just 40,944 in the same period this year, the amount left adrift in the Sahara by Algeria has jumped.

In May last year, 135 people were left to fend for themselves in the desert between Algeria and Niger alone – according to the International Organisation for Migration (IOM) – but this stood at 2,888 in April this year – a 20-fold increase.

The expulsions happen both during the day, when temperatures can hit 110F (43C), and at night, when migrants fumble blindly in the dunes, looking for shelter and safety.

Dozens – perhaps hundreds – are dying of dehydration and heatstroke in the dunes. And yet the virtue signalling lefties deny all this and say it is just a right wing conspiracy to stop migrants coming to Europe. Really these politically correct idiots are as much to blame for the crisis as the inept politicians who let it happen and the organised crime networks who exploit poor and desperate people.