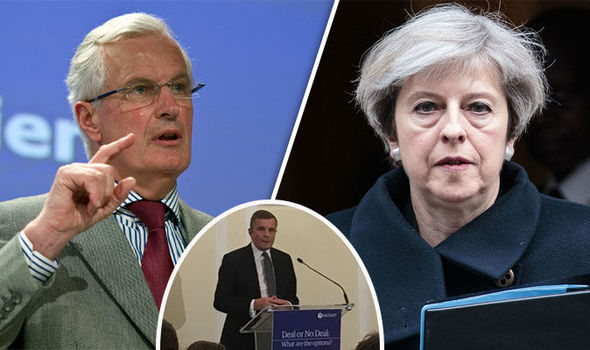 For all the EU’s threats, promises that Britain would be punished for leaving, and predictions that we could not survive as a nation outside the bureaucratic dictarorship of Brussels, it has emerged the pen pushers are more fightened of Brexit than the majority of British voters who voted to leave. A source within the European Commission told The Sun that EU plans for a No Deal exit exist, but claimed they are being kept secret to increase the pressure on the UK to accept a soft Brexit deal.

According to the source: “The EU doesn’t want 20 mile tailbacks [at border crossings] as much as the UK doesn’t. The thinking is we’ll keep things as they are because the regulatory platform is the same.n This will stay in place for a few months and then there’ll be a mad dash to get a new agreement in place.”

This probably means that the EU and UK would continue to recognise each other’s regulatory standards for a time, as it was unlikely that a divorce deal cabable of being ratified by all 27 remaining member states could have ben completed even if serious negotiations had begun the day after the referendum. It could also see EU-UK borders kept open to all but the most high-risk goods to reduce the chances of huge queues developing at customs points.

This contradicts the EU’s public no-deal plans, which are significantly more stringent. They include goods being checked for: “Customs, sanitary and phytosanitary standards and verification of compliance with EU norms”. The official plans predict UK-EU trade would be “severely impacted” by a no-deal Brexit and suggest there would be “significant delays” at the borders. Brussels has come under pressure from the more economically powerful members to remove such obstacles.

Earlier this week Brexit Secretary Dominic Raab released a series of Government papers setting out “practical and proportional” advice in case Brexit happens without an exit deal.According to these papers the UK will automatically recognise European drug and medical standards to avoid delays.

Austrian Chancellor Werner Faymann said at the E?U summit on British membership terms that the European Union wants to reach an agreement with the United Kingdom, but it is not prepared to compromise the banking union (financial integration) or the further integration of monetary union (UK being forced to abandon the pound join the Euro?) to achieve this goal.

EU Officials Say Europe Is “Going Down The Drain
Common sense could not slow the charge of politically correct globalist politiciand towards merging the 28 member states of the European Union into a single federal entity, but their attempt to destroy democracy by flooding the continent with illiterate third world peasants has finally awoken the spirits of Europe’s ancient nations.

Major blow for Brexit campaign as US rules out UK-only trade deal?

Michael Froman, the US Trade Representative, said America is “not in the market” for trade deals with individual states and would only consider free trade agreements with blocs of nations. “I think it’s absolutely clear that Britain has a greater voice at the trade table being part of the EU, being part of a larger economic entity,” Mr Froman told Reuters.