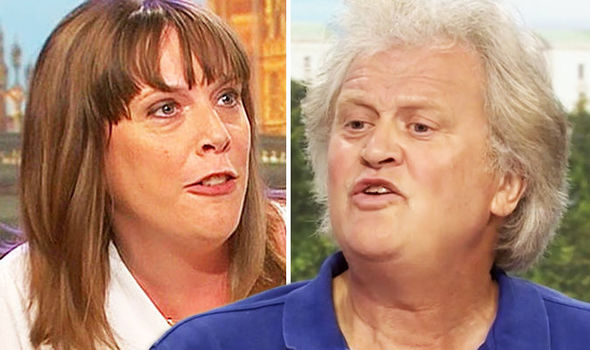 Tim Martin (right) looks terrified by the face Labour MP Jess Phillips plans to use as her sdecret weapon in the Miss Uglyverse pageant.

The Wetherspoons pub chain owner Tim Martin was involved in an incendiary exchage with economically and politically illiterate, unfuckable feminist gobshite Jess Phillips, the Labour MP for some immigrant – laden inner city shithole in the midlands on the BBC’s Politics Live today.

In a fiery clash with the far left Labour MP, Martin said he remained confident a no deal Brexit would give a massive boost for the UK economy, including the chance for Britons to pocket an extra £600 if no withdrawal bill is paid to the European Union. He argued that leaving the bloc without a new arrangement would allow Britain to get rid of import tariffs, transforming the country into a “free trading nation.”

Speaking on BBC Politics Live, the pub chain boss said: “I think we’d be better off with no deal. As soon as you start off on day one having to pay out a bill of £40billion – that’s £600 per person, £60million for Liz and Jess’ constituencies – it’s not a good deal.

“We’d be £40billion better off, you can abolish tariffs which apply on over 12,000 products, things that people buy every day in the shops. You can regain control of fishing and you can encourage foreign businesses to invest here because you can be a free trading nation.”

But Mr Martin’s claims were not met with the approval of Labour MP Jess Phillips, a supporter of uncontrolled immigration and just about every other economically and socially damaging policy put forward by the university brainwashed idiots of Labour’s Maoist fringe,  who interrupted him as he made an argument against “attaching ourselves” to EU trading policies.

Rolling her eyes, Ms Phillips joined in saying: “Attaching ourselves to the biggest market in the world would be a folly. Honestly. I was being sarcastic.” Like most Labour MPs, Phillips is too stupid to understand the EU is not a market, it is 27 separate markets, many of them barely significant in global economic terms, and with which Britain has an enormous trade deficit.

Mr Martin defended his argument, agreeing that it would be a folly for Britain to remain too commercially close to Brussels “if you lose your democracy as a result.”  He is of course right, the anti democratic nature of the EU is documented in Yanis Varoufakis’ book “Adults In The Room – My Struggle With Europe’s Deep Establishment” in which the former Finance Minister of Greece describes how he, on behalf of his country, tried to take on the EU establishment, with disastrous results as we have all witnessed over the past few years.

Britain, the fifth largest economy in the world and a nation of over sixty million people, is a somewhat tougher target for the bullies of Brussels, even under the current government under Theresa the Appeaser, it would be impossible to crush us as little Greece, along with Ireland, Portugal and Cyprus have been crushed by Brussels bullies. In fact, once free of the EU’s suffocating bureaucracy and with a half decent leader in place, we would be free to trade with emerging economies like India, Nigeria, Brazil and Indonesia, as well as increasing our trade with the USA, Japan, Russia, Canada and Australia.

And those EU nations which do trade with us, notably Germany, France, Italy, spain and Poland don’t want to lose their British market. Brussels is obsessed with creating a European political superstate, EU members just want to trade freely.

Brexit-supporting Fishermen Worried May Will Sell Them out After ‘30 Years of Torment
British fishermen fear Theresa the Appeaser May will sell out their industry to the EU, as Brussels negotiator Michel Barnier courts their European rivals in Denmark. It is outrageous, but typical of the Euronazis approach to negotiations that Brussels is making promises to EU member states about what they will be allowed to do in …

Liam Fox Savages Labour’s ‘Betrayal’ Brexit Plan with UK in EU Customs Union
We’ve said it before and its certain all of us will say it again. If you lumped the whole of the parliamentary Labour Party together, they would just about equal the intellect of a retarded five year old suet pudding. Why would any sane person want to keep us in the EU customes union, which …

Europhile Tory Patten brands votes like Brexit ‘appalling and a sin against parliamentary democracy’
Former Conservative Cabinet minister ‘Lord’ Chris Patten has spoken of his ‘horror’ over Brexit and warned the EU was ‘devouring’ his party as Remainers rage, raged against the dying of the Europe projects hoping to block the flagship EU bill during the first day of a marathon 48-hour debate. Long time Europhile and elitist meritocrat …

Corbyn Comes Out: UK Can’t Stay in EU Single Market After Brexit
He’s been a lifelong opponent of the unemocratic, protectionist EU who has been held to ransome for a year and a half by the rabid remainmers in his party. now at last Jeremy Corbyn has come out of the closet and said there can be no half – arsed, half – in, half – out …

Could Italy’s Banking Crisis Drag Down Mario Draghi?
The latest banking crisis in Italy risks focusing scrutiny on the leadership of both the Bank of Italy and Italy’s financial markets regulator Consob. The decision to give the central bank’s current Chairman Ignazio Visco a fresh six-year mandate despite his having presided over one of the worst banking crises in living memory …

Why does the United Kingdom want to leave the European Union?
I worked for the European Commission, the administrative branch of the EU governing bureaucracy for several years, though I was not an official but an external consultant. On the way to my office in the Batement Jean Monnet in Luxembourg City every morning I would pass a large plaque, The words etched on it described the vision of Monnet, Coudenhove – Kalergi, Robert Schuman, Paul – Henri Spaak and others, of a Europe in which there were no French people, no Germans, Italians, Dutch, Belgians and eventually, as the community expanded, no Britons, Spaniards Portuguese, Greeks, Austrians, Swedes etc., only Europeans,

‘Have you learned NOTHING from Brexit?’ Brilliant moment Andrew Neil SKEWERS German MEP