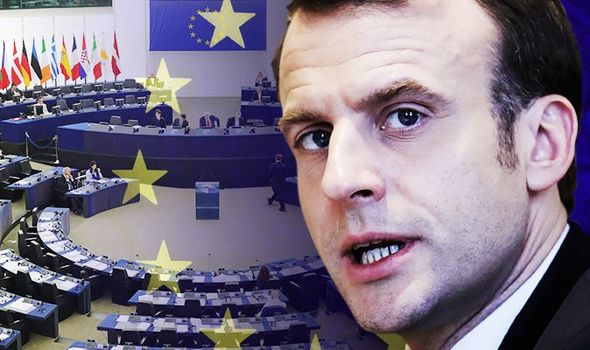 The rise of Emmanual Macron and his Euro-federalist party, though a temporary aberration in French politics, has forced a realignment of the traditional parties of government, conservative Les Républicains (Gaullists) and the Socialist Party (PS), and they could both become bit-part players in the two biggest blocs in the chamber. This would mean fewer influential posts for lawmakers and far less say in Parliament over crucial decisions shaping Europe.

The Socialist Party is polling at just five percent, and if it falls below that threshold in the election due in May, it will not have any MEPs in the next European Parliament. An official from the French delegation of the centre-left Socialists and Democrats (S&D) bloc in the legislature told Politico: “The risk is that the left is so deeply divided that there won’t be any French person to represent it in the Parliament.

According to forecasts from Politico, the Socialists would drop to just five seats in the next Parliament, having secured 13 spaces during the last election in 2014.

Christine Revault d’Allonnes-Bonnefoy, a Socialist MEP who has been touted as a possible candidate to lead her party in the upcoming election, said: “We are going to lose a lot of MEPs. What we’re facing is a catastrophe. Right now, we are doing the job, we’re getting on with things. It’s not enough, but I don’t have any magic wand to change things.”

In an interview with French magazine Le Point last month, Françoise Grossetête said: “Their call to reform Europe has become a mantra, and shows the total ignorance of everything that has been carried out in the last five years when the right has led the governing majority in Europe.”

If current projections prove accurate, the Republicans would have a smaller delegation in the European Parliament than Hungary’s ruling Fidesz party, while the once dominant Socialists would bring in the same number of seats as Denmark’s Social Democrats.

This reduction in French influence would be a huge blow to France, which for years has seen its MEPs push for progress on issues deemed in their country’s interests, including a change to the rules on EU citizens working temporarily in another of the bloc’s countries.

According to Politico’s forecasts, the Republicans are set to win 11 seats in the election, but this is still down from the 20 spots five years ago. What is not being mentioned by mainstream media is that Rassemblement National, the Eurosceptic, nationalist, anti immigration party led by Marine Le Pen look set to make massive gains.