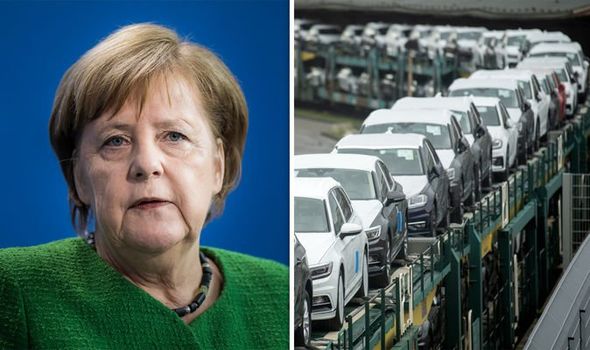 Germany’s federal Government today reduced its growth forecast for the EU’s largest economy today after for the second time in two months as plunging car production figures sent shockwaves through the Eurozone. The German economy, already technically in recession, has been propping up the economically stagnant EU for years. After Brexit of course, with the only other net contributor to the EU gone, even a growing Germany economy could not alone have supported the many economic basket cases the empire builders in Brussels have allowed into the European Union.

Forecast GDP growth has been cut to 0.8 percent for 2019, German business newspaper Handelsblatt has reported, citing an official Government document. The Government had already cut growth expectations for this year in January from 1.8 percent to one percent as the economy technically slipped into recession having contracted for the third consecutive quarter. The eurozone’s most powerful economy with GDP at more than £3trillion, has suffered from the effects of trade wars, a weakening global economy, and mounting political instability throughout Europe, as the swing to nationalism continues to gather momentum in the wake of Brexit.

The latest downgrade in the nation’s economic expectations came after Germany’s National Statistics Office said industrial output dropped 0.8 percent in January – well below market expectations for a 0.5 percent rise. Continuation of that trend would mean a catastrophic recession for Germany which would drag down the rest of the EU.

The news follows bleak forecasts from the Economic Cooperation and Development (OECD) on Wednesday, which lowered its growth forecast for Germany to 0.7 percent, a cut of 0.9 percentage points. Separate data from the Economy Ministry showed car production plunged 9.2 percent in January.