The process of selecting the person who will succeed Jean-Cluade Juncker as European Commission President is a deeply flawed “hoax” dreamed up by “Eurofanatics” who want to create a United States of Europe, a German MEP said today.

Hans-Olaf Henkel made his remarks as the prospective candidates – known as Spitzenkandidaten, in Germany, jockeyed for position. In accordance with the procedure, European political parties, prior to the European elections being held on May 23, appoint lead candidates for the role of Commission President, with the presidency of the Commission going to the candidate of the political party “capable of marshalling sufficient parliamentary support”. Hopefuls include Manfred Weber, who has served as Leader of the European People’s Party in the European Parliament since 2014 and Dutchman Frans Timmermans, Mr Juncker’s vice president, a member of the Party of European Socialists (PES).

Denmark’s Margrethe Vestager, European Commissioner for Competition since 2014 who successfully prosecuted Google over unfair business practices, is one of a number of names put forward by the Alliance of Liberals and Democrats as wanting the top job, with the Phlegm Guy Verhofstadt, the European Parliament’s chief Brexit negotiator, also on the list.

However, Mr Henkel told reporters: “The idea of a ‘Spitzenkandidat’ is a hoax!

“It is predominantly a German idea. As the name already implies, it is the idea of German euromantics who can’t wait to create the United States of Europe with more centralisation, harmonisation and socialisation.

“Like ‘Kindergarten’ or ‘Angst’, ‘Spitzenkandidat’ has already found its way into the language of other countries’ political language. 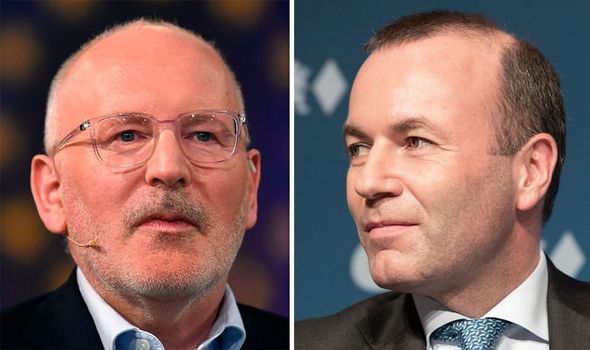 “It is a clear case of political shadow-boxing. Who knows Mr Weber or Mr Timmermans in Spain, Italy or France? Even in Germany, Mr. Weber is widely unknown.

“To pretend that the ‘European People’ might have voted for either candidate in the forthcoming European election is therefore fooling the public.

“During the last campaign for the European elections, Juncker was Spitzenkandidat of the EPP but I saw not one poster of him during my own campaign throughout Germany. Instead Ms Merkel and Mr Schulz were to be seen on posters all over the place.

“Mr Weber is unqualified for such a job. He has no executive experience in anything

“He wasn’t even mayor or dog catcher of a small town of Bavaria where he comes from. His entire career was almost only that of a party politician.”

Ms Vestager, who forced Google to pay 4.4billion in back tax after investigating their tax avoidance techniques and later fining the tech giant over $2billion for manipulating search results to their own financial advantage,  and who has also taken action against the governments of Ireland and the Netherlands to force them to pay more taxes to the bloc, was highlighted by Harald Schumann, editor of German newspaper Tagesspeigel, as the “ideal” candidate – but Mr Henkel was unconvinced.

He said: “It is true that Mme. Vestager was much more visible and “successful” than other EU-Commissioners but that doesn’t automatically mean that she is qualified.

“Let’s not forget that she runs the only job in the Commission that has legal clout. While she has become popular because of fining large companies, one should remember that most of her predecessors were equally popular.

British MEP Reveals Undemocratic EU Stitch Up Of Top Jobs
Brexit Party MEP Alexandra Phillips angrily blew the whistle on the undemocratic election process for choosing the European Parliament’s highly influential Committee chairs. The Newly elected MEP claimed the Federalist bloc had organised a “stitch-up behind closed doors”. Phillips said she was “astonished” by the method the European Parliament uses to elect chairs of its committees.