It is not often we look to the dear old Daily Express to keep us informed of the true left wing position on current issues but as the possibility of Britain  leaving the EU without a formal withdrawal agreement becomes a probability, and those Labour loony lefties, confuddled Conservatives and limp dicked Lib Dems  who led the Remain campaign and are still convinced that in a parallel universe they won continue to plot and scheme to thwart Brexit the arguments are becoming more toxic.

Yesterday I read a few paragraphs by someone claiming a no – deal break with Brussels with Brussels would result in all commercial arrangements currently in place between Britain and the bloc ceasing at 11pm on October 31. Well that’s wrongr but its an arguable case, but when the writer went a step further (a step beyond reality,) by claiming we would then be unable to trade with anybody I had to give up.

As Britain is now stuck in  Brexit limbo, with only Nigel Farage to argue against the threats and lies of the Brussels bureaucratic dictatorship until a new Conservative leader and bt tradition Prime Minister is elected, it was refreshing to hear on You Tube today a brilliant speech made by an anti EU Labour MP, Peter Shore. Unfortunately Shore died in 2001 and his anti EU speech was made over 40 years ago in an address to The Oxford Union (which in those days was so revolutionary it believed in free speech.

At the time, while Labour was, as ever, split on the question of EU membership it was the left, led by Tony Benn, with Shore among his closest associates, who saw the undemocratic, authoritarian and elitist nature of the EU. Conservative Prime Minister Edward Heath had taken Britain into the European Economic Community – the precursor of the EU – in 1973, but his Labour successor, Harold Wilson, was forced to call a referendum on the country’s membership after only two years.

The vote saw the country divided into Yes and No campaigns, as opposed to 2016’s “Leave” and “Remain”. 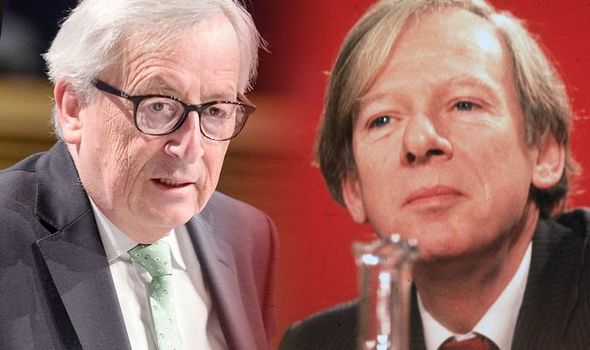 Testicularly deficient bureaucrats Jean Claude Juncker (left) who has said Britain must be made to pay for its decision to leave the EU and former Labour MP Peter Shore who warned us 40 years ago of the danger posed by the inward looking, authoritarian bloc.

Labour MP for Stepney Peter Shore was leading the No campaign’s debate alongside the most prominent eurosceptic figure in his party, the then Secretary of State for Industry Tony Benn when, just before the referendum, the prestigious Oxford Union and addressed issues which still exist today.

Winding up his speech Shore made a brilliant argument on why Britain should not stay in an exclusive  trading bloc that would restrict our ability to trade with the rest of the world.

He said: “We should put to ourselves the facts that the eight countries of Western Europe, important as they are, are not even half of Western Europe itself, let alone the whole of the continent of Europe.

(The EEC then had only nine members including Britain, but the point is still valid, the 27 current members only account for around 12% of the world’s sovereign nations with only Germany sneaking into the top twenty most populous nations at number nineteen. More significant, all those nations above Germany are growing economically, while EU economies are stagnant.)

“Nor for that matter should we ignore the fact that there exist outside the continent of Europe altogether more European people or people of European origin? And that [there are more people] in the great continents of North America, Latin America and Australasia that exists in the whole common market put together? 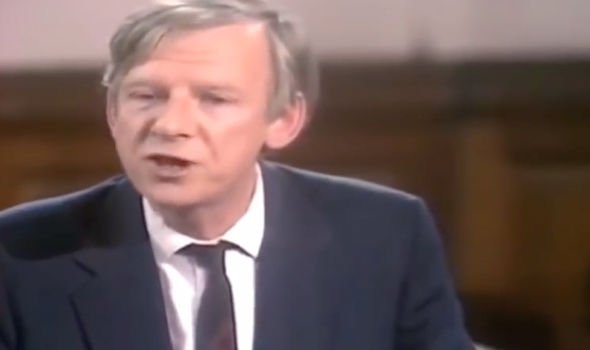 “Beyond that we should recall the fact that our horizon and the concerns that we have in the world as a country and as people are not limited to eight nations and 200million people in Western Europe, but to the 3000million people and 140 nations that exist in the six continents of the world

“The policies that we praise as a Government, the causes that we follow as people, the concerns that we have, are not confined and limited to this narrow area across the channel.”

Mr Shore concluded: “For that to happen to Britain it will be a contraction and a reduction of all the things with we have been concerned

“It is the world we belong to and it is mankind of which we are part, so let us hear.”

He was absolutely correct, while the European trading bloc confined its ambitions to being a free trade area which would enable its members to simplify the bureaucracy involved in international trade, being a member was a good idea. However when the EEC, or EC as it had become, morphed from a trade association to a political entity heading towards the absorption of its sovereign member states into a federal superstate it became a bad idea for the people of those member states, an idea that would only ever benefit the elites.

Shore, Benn and their colleagues in the campaign to take us out of the EEC were aware of the federalist ambition. And in those distant days most people in the Labour Party clung to the rather quaint belief that working class people were of equal worth with the professional, managerial and academic classes and the wealthy elitists of industry, commerce and finance and the insufferable luvvies of the mass entertainment media.

How Much Does The UK Actually Send To The EU

Big kerfuffle this week over Conservative leadership contender Boris Johnson facing trial for his claim, during the EU Referendum campaign, that Britain sends £350million a week to Brussels. Originally the Remainers claimed somebody in the Leave camp had said all the money would go to the NHS. Nobody actually said that but if fanatics want something to be true, they can easily convince themselves it is.

The claim is in fact true but misleading. If the amount paid into the EU budget is taken, then it is close to £350million a week. Our net contribution (i.e. after the amount paid by the EU to fund various EU supported projects means the net amount we contribute to the EU is somewhat less. However that £350million is not the full story:

Donald Tusk, who is the President of the European Council and was the centre-right Europhile Prime Minister of Poland from 2007 to 2014 made the remarks in support of his former Deputy Prime Minister, Anglo-Pole Jan-Vincent Rostowski who is standing as a Change UK candidate in London for Thursday’s election.

Farage Shredded By Welsh Ministry Of Truth Newsman?
An obscure far – left website https://inktank.fi reported that while campaigning for the European Parliament elections in Wales, Nigel Farage was confronted by a BBC Wales reporter, Arwyn Jones, who asked him a question about Brexit, which you’d expect would be easy to answer: Farage didn’t answer, how could anyone answer such a stupid question posed by an idiotic reporter working for an ogranisation tasked by The Fourth Reich’s ruling bureaucracy in Brussels and their puppets in Westminster with presenting pro – EU propaganda as news …

Nigel Farage, who led the successful Brexit campaign, warned backsliding elitist politicians on Tuesday that his brexit Party would spark a political “revolution” – a cliched line but appropriate given the mood of the country – and strike fear into the hearts of ineffectual Tories who have so far failed to deliver on the promise of the Brexit referendum if the UK is forced to contest EU Parliament elections as part of Prime Minister Theresa May’s, the Sun newspaper reports … MORE>>> .

There are sheeple who want to remain in the EU at any price, and then there are people who understand the EU
I am not sure people really are up for reading EU related documents or a whole load more people would be less excited about the EU. If people read the chequers plan and the political declaration they would know the only people who leave the EU are the financial sector. Everyone else stays in without a vote or veto for two years whilst we negotiate the long term deal…

The leader of the Alliance of Liberals and Democrats in Europe (ALDE) told CNN that plans to reform the EU and devolve power from Brussels back to the nation-state proposed by the populist paries that have spring up in member states, and led by Matteo Salvin’s Lega (League) in Italy, Marine le Pen and her Rassemblement National in France and Hungary’s Victor Orban, leader of the Fidesz party would mean that the bloc “will die inside.”

Harold MacMillan, British Prime Minister from 1957 to 1963 gave us a chilling warning about the EEC – (European Economic Community) – before Britain joined the bloc, claiming that Germany had planned on using the trading bloc, as an instrument to assert its supremacy across the continent once more. On Wednesday, 3 April, 2019 The House of Commons voted in favour of legislation which forces the Government to request another extension for ‘Brexit’, giving our current Prime Minister Theresa May more time to show us the comtempt the ruling elite have for the principles of democracy.