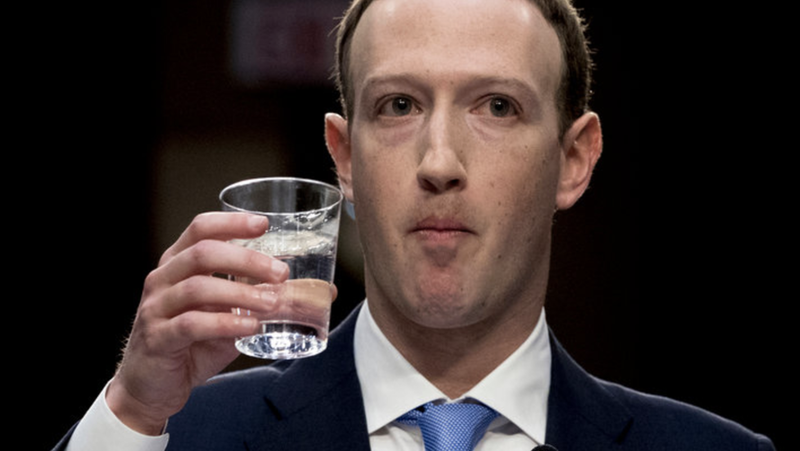 Mark Zuckerberg: If he still thinks he is untouchable the thought will not last much longer.

The reputation of scandal – plagued social media giant Facebook took another hit on Wednesday after emails emerged which appear to show CEO Mark Zuckerberg’s knowledge of questionable privacy practices at the company, (and presumably his approval of such malfeasances as he did not act to stop them,)  according to the Wall Street Journal, citing people familiar with the matter.
The WSJ wrote:

Within the company, the unearthing of the emails in the process of responding to a continuing federal privacy investigation has raised concerns that they would be harmful to Facebook—at least from a public-relations standpoint—if they were to become public, one of the people said.

The potential impact of the internal emails has been a factor in the tech giant’s desire to reach a speedy settlement of the investigation by the Federal Trade Commission, one of the people said. Facebook is operating under a 2012 consent decree with the agency related to privacy, and the emails sent around that time suggest that Mr. Zuckerberg and other senior executives didn’t make.

It is not yet known exactly which emails the FTC has requested, or to what extent they implicate Zuckerberg.

The FTC launched its investigation in 2018 in the wake of the scandal surrounding the massive ‘data harvesting’ exercise brought to light by the Cambridge Analytica controversy which revealed that company specifically had used illegally obtained personal data to target certain users with news intended to influence voting patterns.

In the wake of that other abuses of users’ private information were brough to light and it became clear that Facebook was directly involved in gathering data on web users who do not even have a Facbook account.

The FTC investigators will be looking to ascertain if Facebook’s data privacy lapses violated a 2012 consent decree the company agreed to.

In one email exchange from April 2012 that has caught regulators’ attention, according to a person familiar with the matter, Mr. Zuckerberg asked employees about an app that claimed to have built a database stocked with information about tens of millions of Facebook users. The developer had the ability to display that user information to others on its own site, regardless of those users’ privacy settings on Facebook, the person said.

Mr. Zuckerberg wanted to know if such extensive data collection was possible and if Facebook should do anything to stop developers from displaying that data, the person said.

Another employee responded to Mr. Zuckerberg’s question, saying it was possible and many developers do the same thing but adding it was a complicated issue, the person said. –Wall Street Journal

The Journal also notes that email exchange in question happened after the FTC’s consent decree had been agreed, but before the date on which it took effect, bringing to mind Zuckerberg’s most famous one – liner, “The dumb fucks trust me.”.

The current report states “If [the decree] had been in effect at the time, the stockpiling of such user data would potentially have violated it. Mr. Zuckerberg’s message seemed to indicate he was aware of that, according to the person who was familiar with the exchange,” per the report.

In April, the company said it anticipates paying up to $5 billion to settle the case.

On Tuesday, Facebook said in a statement: “We have fully cooperated with the FTC’s investigation to date and provided tens of thousands of documents, emails and files. We are continuing to work with them and hope to bring this matter to an appropriate resolution.”

Mark Zuckerberg’s bid to set up Facebook as official censor by appointment to The New World Order has backfired spectacularly as major brands are feeing the social media giant’s advertising platform. CrossFit just announced they are shuttering their Facebook and instagram ad campaigns due to censorship, which filters out conservative and libertarian flavoured content and promotes only far left propaganda.

Facebook and its executives were labeled “digital gangsters” by a UKParliamentary inquiry into the social media giant’s abuse of users privacy. The company should immediately be subject to statutory regulation the report published at the conclusion of the 18-month investigation by the Digital, Culture, Media and Sport  parliamentary committee recommended …

Facebook Rattled After Report Claims 50% Of Its Users Are Fake

As it is Burns day we think the words of Scotland’s national poet serve pereftly as a warning to Silicon Valley nerds with world domination ambitions: “The best lain schemes o’ mice and men gang aft a’gley.” One such world domination wannabe for whom things have gang agely in the past year … END_OF_DOCUMENT_TOKEN_TO_BE_REPLACED

Facebook Slides After Report Claims 50% Of Its Users Are Fake

As it is Burns day we think the words of Scotland’s national poet serve pereftly as a warning to Silicon Valley nerds with world domination ambitions: “The best lain schemes o’ mice and men gang aft agley.”

One such world domination wannabe for whom things have gang agely in the past year is Facebook supremo Mark Zuckerberg. But as badly as things have gone for Facebook since the Cambridge Analytica data privacy scandal broke one year ago, in conformation of Murphy’s law (“No matter how bad things are thery can always get worse,” a new report froma team of researchers, led by a former coleague of Mark Zuckerberg at Harvard who helped Zuck create one of the original Facebook prototypes, suggests the reality of the company’s circumstances is even more dire than investors realize.

The Yellow Vests, Deplorables and Gammons Are Here To Stay

The Gilets Jaunes (yellow vest)movement, which began as a Facebook group for dissatisfied French drivers almost a year ago and since the Macron government proposed a hike in fuel taxes for petrol and diesel cars spakred the first street protests, has mushroomed into a people’s rebellion against globalism and corporatism. It has worried the French establishment and succeeded in forcing the usually arrogant and imperious President Macron into offering what globalist fellow travellers in mainstream media call major concessions from the government,

Censorship Comes To The Internet – Goodbye Free Speech
Censorship has always been a sore point in democratic societies, without the right to free speech democracy does not exist. So why have we for years now been willing to tolerate the efforts of Silicon Valley high tech corporations and their left – leaning (that’s left as in Chairman Mao or Pol Pot,) been willing to tolerate this.

Since the 2016 US Presidential election, when the phrase ‘fake news’ entered the vernacular, Facebook has employed thousands of human moderators tasked with identifying what is and is not acceptable content to be posted on the censorious social media website. These humans were not employed to replace the ‘Artificial Intelligence’ automated moderation system the nerdocracy …
Continue reading

While we are tearing Facebook apart, don’t forget to look at our Google being evil catalogue

E.U. Parliament Members Call for Facebook Audit, Competition Law Overhaul
Though not widely reported (well the proceedings were boring,) a number of parliamentary hearings in the European Parliament and the elected assemblies of member nations, have investigated Facebook’s user data breach scandal involving the data thieves Cambridge Analytica. European Union MEPs, including those from Britain have called for a full audit of the social media company and an overhaul of E.U. competition law.

During a meeting held behind closed doors last week, Facebook’s Campbell Brown, according to several people present, warned news publishers that refusal to cooperate with the tech behemoth’s efforts to “revitalize journalism” (i.e. ensure nothing is published Zuckerberg does not like,) will leave media outlets dying “like in a hospice.” Initially reported by The Australianunder a headline which read Work With Facebook or Die: Zuckerberg”

Facebook is to purge its platform of all sex-related content according to the announcement of a new policy banning everything from nude pictures to “sexualized slang,” up to and including “vague suggestive statements.” The social media giant has not bothered informing its users of the new move. The new “sexual solicitation” rules were adopted by … Continue reading

IoT gadget maker Nest Labs adding Google facial recognition to doorbell web enabled doorbell, Google will know who’s at home
Long before Google acquired Internet of Things company Nest, its co-founder Matt Rogers was saying he and his team had big dreams. Nest seem to have convinced themselves that building fridges, washing machines, thermostats and doorbells that couls spy on their owners might work the same trick for them as spying through our computers did for Microsoft, Google and Facebook …