Most people in Britain are sick to the back teeth of Brexit and if you ask anyone in most other European Union member states what is the biggest crisis the EU is likely to face this year they will almost certainly say the crippling effect of Britain leaving the EU without a trade deal. That’s because they get their information via the carefully sculpted narratives presented in mainstream media.

But Britain is not the only EU member state to have had major misgivings for many years about the way the EU is run, the increasingly authoritarian attitude of the EU bureaucracy towards the democratically elected governments of its members or the direction in which the EU is taking, towards the welding of 27 sovereign states into a single politically entity, Federal Europe (or Greater Germany as many cynics like to call it,)

In spite of the news media’s selective reporting however, another crisis is developing that could destroy the single currency and break up the ‘Eurozone’, the member states that adopted the Euro. Unsurprisingly it has not been reported in mainstream media, and so is not on the radar for most people.  At the centre of this budding crisis is not the UK and Brexit, but Italy and its plan for a parallel currency. 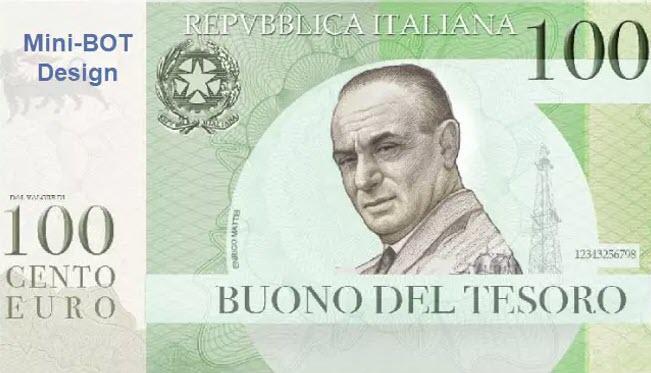 Both party leaders in Italy’s ruling coalition, Matteo Salvini (League) and Luigi Di Maio (Five Star Movement) support the idea of a parallel currency as both parties, League from right of centre and Five Star to the left, have blamed most of Italy’s recent economic problms on the country’s being forced into the single currency when in reality its economy failed to meet the standards set by the EU for joining a system which effectively tied the weak economies of southern Europe including Italy, Spain, Portugal and Greece and the economies of smaller EU nations to the powerful, manufacturing based economy of Germany.

Needless to say those weak economies have accumulated insupportable debt burdens because as long as they are in the common currency system they cannot devalue their currency or set their own interest rates to reduce the burden of servicing their debt, while solvent but small economies such as those of Belgium and Denmark have struggled because Eurozone membership deprives national governments of financial flexibiltiy.

Italy, with the world’s eighth or ninth largest economy last time I looked, cannot be pushed around as small counties like Greece and Ireland have been pushed around by the EU. The technocrat prime minister, Giuseppe Conte, appointed by the EU after Brussels showed its contempt for democracy by refusing to accept the elected leader of  a Eurosceptic party as political leader of a member state, is not calling the shots and threatened to resign over this issue unless Salvini and Di Maio cave in to Brussels diktat. And neither is in the mood to back down and appease the bureaucrats on this issue.

European Central Bank president and Federalist fanatic, Mario Draghi, proclaimed “Mini-BOTs are either money and then they are illegal, or they are debt and then the stock of debt goes up. I don’t think there is a third possibility.”

A week ago, I noted possibility number three in Italy’s Mini-BOT Trojan Horse Could Blow Up the Eurozone.

Possibility three is a Trojan horse designed as a stepping stone to get Italy out of the Eurozone. The Daily  Telegraph reported recently that Italian Tensions Hit Boiling Point Over Plans for ‘Currency’ to Rival the Euro.

The two parties that make up the fractious governing alliance – the hard-Right League and the Five Star Movement – want to introduce a new type of government bond that would be used to pay off the state’s debts to companies and individuals.

Both the League and Five Star are deeply eurosceptic and have in the past mooted the idea of abandoning the common currency, with Matteo Salvini, the League’s combative leader, last year calling the euro “a mistaken experiment that has damaged jobs and the Italian economy“.

The idea of introducing mini-BOTs has alarmed Europe, with Mario Draghi, the head of the European Central Bank, saying on Thursday that they would either amount to a parallel currency, in which case they would be illegal, or they would simply add to Italy’s towering debt.

He received support a day later from Vincenzo Boccia, the president of Confindustria, Italy’s employers’ federation, who said: “We are on the same wavelength as Draghi about the mini-bots because it would just mean more public debt.”

“There’s a complicated game going on between the League, Five Star, the Quirinale (the residence of the president of Italy, Sergio Mattarella), ministers and the prime minister,” said Prof Giovanni Orsina, a professor of politics at Luiss University in Rome.

A showdown between Rome and Brussels over who rules Italy looks certain, chiefly because, safe in the knowledge that the Italian people are behind them, Salvini and Di Maio are looking for confrontation.

Brussels (by which we mean the EU commission, the unelected bureaucrats who effectively govern the EU,) are determined Italy’s mini – bots scheme must be stopped at all costs. Meanwhile the government in  Italy wants to do it in order to prop up its perpetually wobbling economy and ease the yoke og German fiscal austerity membership of the Single Currency places on it, and therefore, one way or another, the Italian coalition will do it, but Rome would prefer the EU trigger the event and it looks as if the government in the eternal City might have manoeuvred Brussels into granting their wish.

The Italian budget is not even  close to meeting the EU’s rules for Eurozone members and the coalition government have no intention of trying to meet those rules, for them it is a question of who governs Italy, the democratically elected asssembly or the bureaucrats in distant Belgium.The EU has resorted to its usual bullying tactics and threatened Excessive Deficit Procedures against Italy.

The EU has kicked the can down the road almost as far as it can on debt targets but the Italian government is seeking confrontation and will not back own even as far as agreeing to cosmetic changes in their financial plans to give the appearance of trying to comply, therefore the fate of The Euro is sealed. The EU will either have to abandon its rules or fine Italy. If it does not fine Italy other, smaller, Eurozone members will quit as many are unhappy at the way Germany has, since the single currency was floated, manipulated the system to its own advantage.

The fine and resulting spike in Italian bond yields will act as the trigger for Italy to launch its Mini-BOTs.

The longer the EU holds off imposing that fine, the more time Italy has to prepare for the Mini-BOT launch which, because the Italian economy is profoundly in breach of Eurozone rules on it’s deficit, which the Lega / Five Star coalition government plan to increase (sic), is the only way of avoiding a default on Italy’s debt. The EU have already imposed one fine which Salvini has refused to pay. Further penalties have been threatened, but this is pure vindictiveness of the part of The Fourth Reich as some have taken to calling the EU Commission At the moment, France is also in breach of economic rules yet because France’s President Macron is one of the prime movers in the push for political unification, nobody is talking about taking action to punish French fiscal irresponsibility.

The most likely outcome is not a High Noon style showdown, the EU will try to do what it always does when faced with a crisis, by pretending there is no crisis just a minor local misunderstanding, while hoping it goes away. Bureaucrats are no more eager for confrontation than they are over having to make decisions for which they can be held accountable. But this crisis is not going to go away and with others festering in Poland and Spain, sooner or later the Europhiles who have driven the push for political unification (The European Project,) are going to have to face up to the fact that they have failed to sell their dream to the people of the member states, and the EU must reform by devolving power to the sovereign members of its members and return to being a free trade and political cooperation community of nations with broadly similar cultural backgrounds in the Romano – Greek or Celtic – Germanic cultures.

Whatever the short term outcome Italy is set to leave the Eurozone, it is a question of when rather than if. The Mini-BOT is the transition mechanism. Few see it coming.

Salvini Accuses Leftist Govt of Giving Away Italian Sovereignty to EUMatteo Salvini leader of the hugely popular Populist League (Lega) party, which, despite having a democratic mandate, was excluded from the government of Italy by a stitch up enigineered by the Euronazi EU Commission in Brussels, has accused Giuseppe Conte the Italian prime minister apponted by the EU, of handing over Italian sovereignty to the European Union bureaucrats

A court in Sicily has allowed proceedings against Italian Eurosceptic Interior Minister, leader of The League and all-around pain-in-the-arse for The Davos Crowd, Matteo Salvini. In what must be one of the most ludicrous EU efforts to silence nationalist leaders ahead of elections to the European Parliament in May this year, judges ruled Salvini should …

You thought Brexit was the only problem the EU was struggling with at the moment? How wrong were you? The EU Commission’s latest rejection of Italy’s budget is the first step in disciplinary procedures that, in typical school bully stylem the bastards of Brussels threaten will lead to big fines and economic …

Italian Elections: It is the EU, Not Russia, Who is the Meddler
The harder the EU tries to impose its globalist agenda on people in some of its member states, the less willing they will be to toe Brussels’ line, Italian journalist Marco Fontana commented on Sunday’s election.

The EU can go and F*** itself!’ Politician’s Outburst Rallies Support In Italy

The leader of the Lega party, formerly known as Lega Nord, Matteo Salvini claimed the European Union should stop interfering with Italian politics as the measures taken by the bloc have crippled the Italian economy for the past 15 years. Mr Salvini is the frontrunner in the upcoming Italian general election as Italy’s next Prime Minister.

Union Flag Becomes a Symbol of Anti-EU Protest in Italy

In a gesture that shows grassroots opinion in European Union nations is not in line with the anti – Britain rhetoric of senior EU bureaucrats, American globalist politicians and pro – federalisation leaders of Germany and France, small businesses along the Italian riviera have started to fly Britain’s Union flag in protest at a European Union ruling which would open the area to multinational businesses.

As Italy’s poor struggle to come to terms with a lack of job prospects and the challenges of a globalized world, some are blaming asylum-seekers.

Elvio fifty – one year old unemployed construction worker asks, “Why do they have to be taken care of? It’s me that needs taking care of.”
Like many working class Italians Elvio has had enough of being told how wonderful immigration is for the economy and how enriching for Italian culture. As far are he is concerned, immigration is one of the biggest problems. And Elvio thinks he knows who to blame.

3 thoughts on “Will Italy’s Mini – Bot Break The Eurozone?”