Skip to content
HomeEco Nuts Are Back, Threatening To Shut Down Heathrow 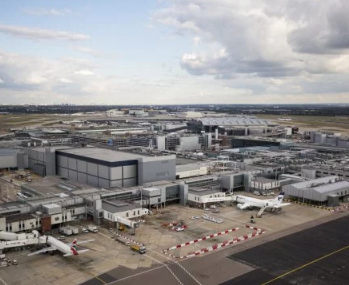 Yesterday’s story featured a bunch of eco – hypocrites, rock band The 1975, whose latest album features eco – wunderkind Greta Thunberg reading a plea for us all to adopy zero emissions lifestyles to save the planet and who will shortly be jetting off on a world tour to promote their message (and album sales of course.)

Today we report on the eco – psychopathes of Extinction Rebellion and their insane plan to shut down Heathrow Airport by flying drones into the approach and take off flight paths of aircraft using the world’s busiest airport.

The eco-warriors have grown more ambitious but no more intelligent since their attempt to shut down London by blocking main roads in and out of the city centre anatagonised people rather than gaining support for their movement.
This time they’re calling themselves ‘drone activists’ and are planning to ground flights at Britain’s Heathrow throughout September.A drone activist group calling itself Heathrow Pause and described as a splinter of environmental group Extinction Rebellion has warned that on September 13 its members will be flying drones around Heathrow, forcing the grounding of flights as part of a protest at the planned expansion of the airport.

These protests cause a dilemma for many people, because while almost everyone wants to save the world, many of us believe the problems are not carbon dioxide emissions but population explosion and the toxic shite dumped in the environment by manufacturing processes and the kind of careless consumption promoted by governments, economists and scientists for decades as a means to maintain ‘growth.’

So apart from barking up the wrong tree on cause, the eco – nutters seem to target the wrong people with their brainless stunts. People have to travel on business and move goods around the globe, people want to go on holiday, and many actually want to come back from holiday before theor money runs out.

And who wouldn’t choose a week on the beach over protecting some small, unknown glacier in Iceland.

Perhaps activists need to take this into account when planning their public relations campaign. At the moment the environmentalists seem to believe that they can annoy the public into changing their behaviour with a series of seriously. Last time I checked that was called bullying and was a favourite tactic of fascist and communist groups that deal in authoritarianism.

The extremists targeting Heathrow say a legal loophole will allow them to fly drones near the airport without breaking the law. They will be flying toy drones at head height within restricted airspace which they believe will force all air traffic to be stopped without violating air safety regulations.

Some members claim they have discussed the plans with police in advance. This could cause hard liners to question their commitment, as telling the authorities in advance where, when and how you intend to disrupt air traffic give the cops chance to round up the would be perpetrators, charge them with conspiracy and bang them up on remand.This news blog would wholly approve of such action. Anything that gets a bunch of crusties who stink of patchouli oil off te streets and out of our nostrils improves the environment.

This latest plan to force us to care about climate catastrophe tells us as much about the intelligence of eco warriors as their belief that pissing off people who hope to persuade to share your point of view is  not usually the best way to boost support for a cause.

The activists justify their protest action by insisting they are raising awareness of climate change, but is there anyone in Britain for example that is not aware of the scaremongering or prophecies of doom over climate change that have been thrown about for the past twenty years? Or for that matter that all the prophecies of disaster have failed to deliver, the polar ice caps still exists, the Himalayan glaciers still exist, polar bear numbers are increasing, sea levels are rising no faster than they have since the end of the last ice age and we still get snow in winter, despite all the warning of the scaremongers. And most people in Britain, apart from crusties, university brainwashed liberals and Jeremy Corbyn supporters are aware of that.

War and Politics Behind Mass Displacement in Africa, Not Climate Change – UCL
A report from a new study conducted by University College London’s may cause a stir in the climate scaremongering industry. The report challenges the academic establishment’s standard narrative of mass displacement in Africa being principally responsible for the creation of refugees in Africa and casts doubt on a number of other assumptions about global problems.

German Scientist Confims Climate Change Ia A Politically Motivated Scam
Even as the inbred idiot Prince Charles was babbling to a hand picked audience about the skid marks in his underpants being caused by Climate Change, a somewhat more scientifically literate person, Dr. Friedrich Karl Ewert, a retired geologist and data computation expert, has confirmed what those of us dubbed ‘climate deniers’ have been telling you for years …

Climate Denial Finally Pays Off
This blog has always been sceptical of the scientific case for climate change. And we admit that NO we are not climate scientists, NO we have not published research papers in ‘peer reviewed’ science journals. Of the three main contributors (all retired or semi retired) one is an engineer who still lectures in engineering and …