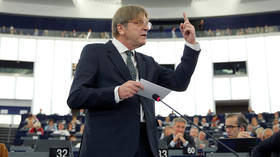 EU Brexit coordinator Guy Verhofstadt’s rant that tomorrow’s world order is “based on empires” has been met with mockery on social media, and with accusations that such rhetoric is ironically out of the ‘Brexiteers’ playbook.’

Belgian MEP Verhofstadt, who was a guest speaker at the Liberal Democrats Party conference in Bournemouth on Saturday, told the audience that the world order is no longer about nation states, but about empires, like the European Union. His words received a rapturous response from the pro-EU party delegates.

Verhofstadt claims that countries like China, India and the US have more characteristics of empires than nation states, because of the size of their populations and their influence on the world, and because of this, the EU has to respond.

However, the MEP’s remarks have been met with amusement and bemusement in equal measure, and with accusations that his rhetoric is that of “a madman.”

Brexiteers on Twitter have been quick to highlight the irony of Verhofstadt’s sentiments. They are astounded that the case for an EU empire has been warmly received by Remain supporters, who have consistently ridiculed Brexiteers for “harking back to Empire days.”