Coincidental with the bizarre events in the UK’s Supreme Coirt, where judges tried to usurp the power of parliament to themselves in a globaloist bid to stop Brexit, the economic situation in Europe, which as we have reported many times is dire, has entered into a critical period.  With one of the two net contributors o the EU treasury about to leave,Germany, which for decades has propped up the bloc financially as more and more economic basket cases were absorbed into Brussels’ wannabe empire, has stumbled into if not actually a recession then something very like one

Year on Year (YoY) growth in the German economy, from July 2018, July 2019 is 0.4% – what you would expect in the middle of a depression, and significantly less than the official inflation rate (while the real rate of inflation is, predictably, higher still. UK growth figures are slightly better coming in at 1.2%. Poor old Italy recorded a GDP growth of -0.1% YoY, (that’s a minus sign by the way).

Italy has a Debt-to-GDP ratio of 132% and finally France with a growth rate of 1.4% and a debt-to-GDP of 97% is effectively broke. That’s the big four in the EU/Eurozone.

Inexplicably the ECB is getting geared up for another round of QE, which means that the euro is going to be devalued. Of course, the Americans aren’t going to be best pleased with this turn of events but doubling down on the policy that failed is par for the course with the EU. Only a few years ago they decided the way to resolve the problem of mass immigration was ………… more mass immigration, and are currently proposing more politicalintegration of member states to counter the resurgence in nationalism triggered by …………….. wait for it ………………. forcing political integration on member states.

By failing to support US trade tariffs on nations that have pissed off Washington, the EU has involved itself peripherally in the US tade war with the world. but this can onlu=y increase problems. Germany in its present economic travails, and lined up to take the biggest economic hit from Brexit, is not going to welcome any increased costs for its export industries.

Most importantly this includes the cost of the raw material essential to Germany’s manufacturing/export sector. Natural Gas and oil are piped to Germany from Russia and the construction the of Nordstream 2 pipeline, which the US wants to alt to put Putin in his place, is crucial to the German economy. America wants to force Germany to buy more expensive, less reliable, Liquified Natural Gas (LNG) by taking alternative suppliers out of the picture and is threatening to impose sanctions on any company and/or state to get their own way. 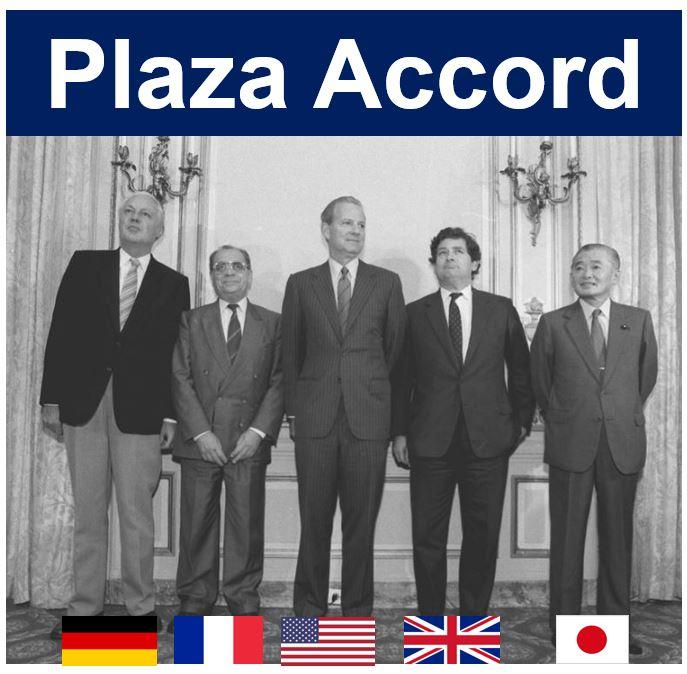 This is a clearly a case of “deja vu all over again” and a moment of truth for the Germans. Do they do what the Americans tell them, which would be economic suicide, or will they pursue their national interests and give Uncle Sam the finger. This was precisely the setting in 1985 though with Japan then the object of US financial and economic destabilisation.

The Plaza Accord was a joint-agreement, signed on 22 September 1985, at the Plaza Hotel in New York City, between France, West Germany, Japan, the United States, and the United Kingdom, to devalue the U.S. dollar in relation to the Japanese yen and German Mark. The resulting recessionary impact which pushed up the value of the Yen against the dollar in Japan’s export-dependent economy.

This created an incentive for the expansionary monetary policies that led to the Japanese investment bubble of the late 1980s. The Plaza Accord triggered the Japanese asset price bubble, which progressed into a protracted period of deflation and low growth in Japan known as the first Lost Decade. Has Germany, and by implication Europe learned the lesson one wonders?

Bearing this in mind it should also be noted that Germany is a big investor in Russia.