As we’ve said before, this blog started  out as a social and political satire publication. Then about 2010 maybe, the virtue signalling of the political left and progressive liberals became so insane it was beyond sanity. This story illustrates how far beyond sanity we have travelled. 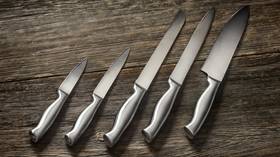 Church of England bishops (who else could be so far out of touch with reality?) are leading a campaign calling on the government to take a toughen up its position on on knife crime, in the wake of a massive upsurge in knife attacks and violent crime since the police were ordered to prioritise the investigation of ‘hate crime’ over pursuing real criminals. One of their suggestions is banning pointed kitchen knives. The suggestion has been met on social media with some confusion, and a lot of jokes.

Church leaders, with support from police, psychiatrists and politicians, penned an open letter to the government, arguing that domestic knives should be redesigned with rounded tips to reduce the number of life-threatening stabbing injuries being inflicted bt thugs with hunting knives, combat knives and machetes. They reportedly argue that pointed blades aren’t even needed in this day and age, given that we have forks to eat with. The useless old farts have obviouslt never skinned a rabbit or gutted a fish.

The absurdity of banning a common kitchen implement was pointed out by bemused netizens, particularly as the proposal comes after police recently announced that they will no longer post images of seized knives “to help reduce the fear of knives,” and as the Home Office uses takeaway packaging to basically tell people that stabbing is bad.

WTF? DON’T THEY UNDERSTAND THUGS THINK BEING BAD IS KOOL, SO TELLING THEN STABBING IS BAD WILL ONLY ENCOURAGE THEM?

Despite such highly effective crime-fighting tactics, the government seems to be having little actual effect on violent knife crime rates if official statistics cab ve believed, and efforts to ‘reach out’ to young criminas appears to be failing to reduce crime or assure the public that the problem is being dealt with.

Many Twitter users were baffled by the suggestion of a pointed kitchen knife ban, wondering if it’s some sort of joke, while others highlighted the fundamental futility of the idea by noting how easy it is to find an alternative sharply-pointed weapon, or to make one.

Some weighed in with creative alternatives to food preparation, should you find yourself bereft of a pointed kitchen knife.

And commenters across the pond were less than impressed with the ‘banning pointy knives’ proposal, with one saying: “When you Europeans get high and mighty about America’s guns and tell us we need to be more like you… this is what comes to mind.”