German farmers today brought the city of Hamburg to a standstill by dribing their tractors into the city and parking on arterial roads thus preventing movement in and out. The tractors protest was organised to show depth of feeling against new EU environment regulations aimed at greening the economies of successful nations in order to comply with the fairy tale dreams of opinion makers like the handlers of Greta Thunberg.

Ideas of creating a carbon neutral environment by 2030, which obsess EU leaders, and globalist politicians in member states, (who all have their sounts in the trough of tax money and thus are insulated form the harsh economic realities of fulfilling green dreams.

As new rules aimed at shifting more and more money making enterprise from Europe to third world countries (where they don’t give a flying fuck about the environment,) a revoultion against the surreal goals of globalism is spreading across Europe. And it is starting among the people we depend on to produce our food in the rural communities. Farmers are among those hardest hit by the new restrictions being imposed by eco – loons.

The Hamburg protests, like the ones we reported a couple of weeks ago, which hit 17 cities across Germany,  involved angry farmers driving tractors onto the streets, blocking  major roads and bridges. 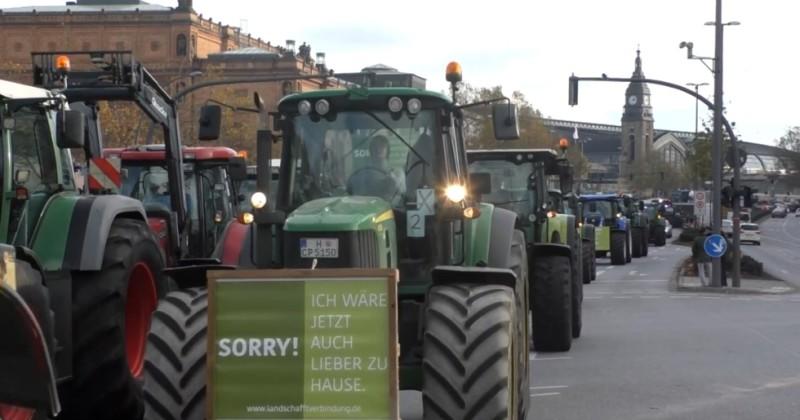 4,000 tractors arrived in Hamburg yesterday in a massive rebuke to what protesters assert is government bullying amidst efforts to impose Green New Deal-style control measures

The farmers claim that new environmental protection rules will damage their business. The measures, put forward by Angela Merkel’s unpopular government at the behest of the EU’s central bureaucracy,, will limit the use of certain weed killers in order to protect field birds, like Eurasian skylarks, lapwings and partridges, as well as some insects.
The protesters say that small family farms will be hit the most, and demand the government to drop the “farmer-bashing” agenda. “We’re not animal killers and polluters,” the farmers leaders said.
Amid the protests, Environment Minister Svenja Schulze promised to help farmers adapt to the new policy and invited them to discuss how to make their businesses “environmentally friendly.” Regional environment ministers were meeting yesterday to discuss  plans to ban certain weed killers and fertilizers, something that farmers insist will kill their livelihoods.

Placards displayed on the tractors included one that read, “No farm, no food, no future,” with farmers expressing their fury at being blamed while their contribution to the economy is ignored and ministers refuse to meet them and lidten to their concerns.

“The rules, which are coming from the German government, are so hard for us that we can’t work on our farms,” Klaus-Peter Lucht, Vice President of the regional Farmers Association, told RT.

“We can’t make good crops. We can’t have good fodder for the dairy [cows].”

The kilometer long convoys of tractors in Hamburg caused “considerable traffic disruption” across the city, according to authorities.

Hamburg is just the latest site of a rural revolt against globalism that is sweeping Europe.

Last month, thousands of Dutch farmers descended on the Netherlands capital to protest against a government proposal that livestock production be slashed by up to 50% in the name of mitigating the contribution of cow farts to global warming.

Demonstrators were angry that the same restrictions they may be hit with will not apply to the aviation industry. This is particularly infuriating as the people stopping farmers making a living enjoy flying round the world in private jets, to lecture the “ignorant, unwoke masses” on the sacrifices WE MUST MAKE for the sake of the planet

The Yellow Vest movement in France, which is set to mark its first anniversary this weekend, also began as a backlash against onerous gas tax hikes and other regulations impacting rural workers.

“F**K The Jab, Long Live Australia” – 20,000 Shut Down Melbourne Highway In Massive Lockdown Protest
Anti-lockdown protests have become commonplace in Australia since the latest round of “snap” lockdowns began two months ago although you wouldn’t think so if you rely on mainstream media for information about what’s going on in this increasingly insane world. Newspapers and broadcast news channels have almost totally blanked stories reporting the pushback against the Australian government’s increasingly authoritarian measures