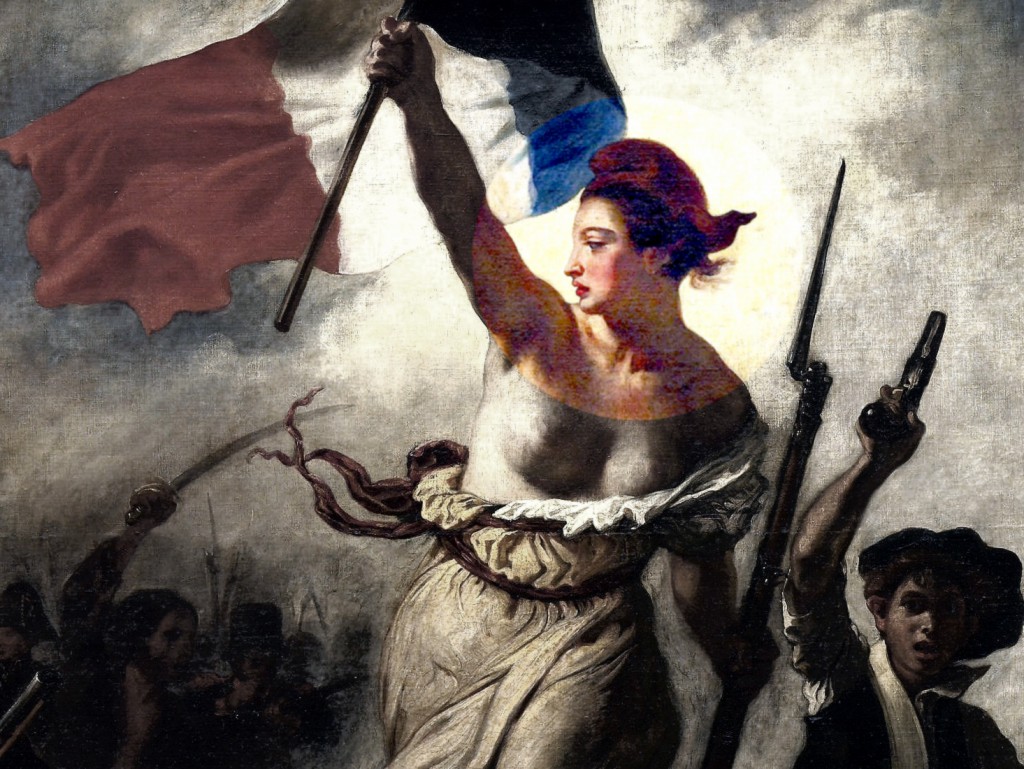 Marianne leading citizens to the barricades (Picture: frenchmoments )
The original painting, Liberty leading the people, by Eugene Delacroix is displayed in the Louvre museum, Paris. I don’t know how the goddess of Liberty came by the name Marianne in French folklore but Marianne embodies the spirit of France and is a hugely significant symbol of French democracy.

I have reported regularly in my news blog, The Daily Stirrer, on the Yellow Vests protests against cost of living increases caused by green policies, high taxes and and general civil unrest due to the disilluionment of citizens with the government of French president Emmanuel Macron. The Yellow Vests have been mostly low key, with occasional outbursts of violent outrage, but the latest protest which is mainly about Macron’s planned pension and retirement reforms, which will force French people to work longer and drive many less well – off retirees into penury according to the protests leaders, have taken the tensions between government and people to a higher and more dangerous level. The general strike, which has hit public transport in France particularly hard, started in early December, held through the Christmas period and appears to be gathering momentum rather than weakening.

The French, as a people, have always had a strongly anarchic streak and tend to take you the streets to protest at the most trivial annoyances. Such protests are usually concluded by noon however, when the entire nation stops what it is doing to enjoy a good luch, and a glass or three of wine or beer, after which they all make friends again and go home.

This time however, the demonstrations and protests fel rather different and darker than the usual light hearted letting off of steam by waving placards, singing revolutionary songs and torching a few cars, a kind of Gallic ritual intended to remind politicians who get above themselves that “we are many, you are few.” After a few million dollars or Eurosworth of damage has been done the government would usually cave in and give the demonstrators most of what they were demanding.

French unions are not as militant as their British counterparts nor as well organised as the Germans is not highly unionized, but their strength in France lies in the hold they have onm the public sector, which includes passenger transport by road, rail and air, seaports, food distribution, education and healthcare. Public sector unions are traditionally belligerent, with roots in 1930’s communism or socialism, and along with trade organisations such as the Fermers Association, have a stranglehold on key sectors of the economy.

What makes the current protests a bigger threat is that the boy President, Emmanuel Macron has managed to antagonise just about every interest group in the country. A former investment banker, Marcon has all the arrogance associated with that profession combined with the small mindedness off a bean counter. And that abrasive combination does dot play well to the anarchistic attitude of many French people. The entire country appears opposed to President Emanuel Macron’s plans to modernize the nation’s crazy-quilt pension regulations that confer special privileges on favored groups of workers. Rail workers, for example, a particularly pampered bunch, can retire with close to full pay while in their 40’s. Ballet dancers enjoy similar benefits. Average workers can retire at 62. Macron wants to change retirement to 64, citing the longer life-span of today’s workers, and to consolidate the nation’s 42 separate retirement plans. This does not seem unreasonable when you consider Britain’s retirement age is 66 years.

However France’s labor movement is up in arms, responding with more outrage and fury than it did when the Germans invaded in 1940 when the habit of clocking off at noon for a long lunch earned them the sobriquet of ‘Cheese – eating surrender monkeys,’ from US President George W Bush after the French government of the day refused to support one of his wars.

In the 1940s of course, orinary French people thought there would be little difference between being governed by a bunch of intellectual socialists who had a penchant for sitting around discussing impenetrable philosophical propositions and a bunch of National Socialists with a collective penchant for wearing extremely shiny boots. They have not forgotten how wrong they were on that one and are not going to let Macron create a replical of the collaborationist Vichy government with the higher authority this time being a bureaucratic dictatorship in Brussels.

Macron’s attitude to the general strike is, “I’m the president, you all have to do what I say.” Unless he backs down however, the transport unions will blockade oil refineries and petroleum distribution centers, crippling most road transport just as rail unions have crippled the rail network. These in turn will affect food distribution, emergency services and airports. Ports will also be targeted.

France is heading for industrial warfare between the state and its citizens. Similar strike action and mass demos brought down the government of Gen Charles De Gaulle in 1968, an earthquake that still shakes French society and haunts its leaders. Looming over this local difficulty however is the gigantic, tottering shadow of the European Union. With the main opposition to Marcon coming from Marine Le Pen’s nationalist and anti EU party Rassemblement National, which would certainly follow Britain’s lead and quit the EU if victorious in the next election. Riding on a wave of nationalistic feeling, anti EU parties have come to the fore in Italy, Germany, Poland and Spain, which accounts for all the EU’s large population nations.

Having been a major supporter of political integration for EU member states throughout the eras of its five most recent presidents France has been right alongside Germany in pushing for the creation of a federal European superstate ,(sorry, did you think I was being frivolous when I compared Marcon’s government to the World War 2 collaborators of the Vichy government?) an idea that plays well to the metropolitan elitists and media luvvies in Paris but is about as popular as a fart in a lift with the general public.

French police drag Yellow Vest “protesters” away from Bastille Day parade as they jeer Macron
As Mr Macron was riding by at the start of the parade, he was greeted by people in the crowds who turned their backs, booed and whistled. Before the parade, he delivered a message to the French people and said he wanted to highlight France’s “irrevocable commitment to consolidate French and European security”.

France must slash taxes now, or face ongoing civil unrest. According to the French prime minister, this is the main message from an unprecedented three-month “great debate” in the wake of anti-government “yellow vest” protests. Announcing publication of the findings from two million online contributions and 10,000 hours of town hall debates around the country, Edouard Philippe said on Monday there was “huge discontent” in the country. Astronomical levels of taxation was one of the prime concerns, alongside unemployment, immigration, and surrender of national sovereignty to the European Union.

On top of the Yellow Vests debacle, which is now destabilising France as the anti – government protests continue, a string of resignations from the tottering government of President Emmanuel Macron has prompted Gérard Larcher, leader of the French Senate to warn Macron that his authoritarian tendencies were partly to blame for the civil unrest crisis and political instability that have weakened his presidency.

The idealistic hope that mass protests and civil disobedience could trigger real social change met with some success in the nineteenth and early twentieth centuries but looked to have died after the USA’s 1960s civil rights movement and anti – war protests. The recent mass demonstrations of Frane’s gilets jaunes (yellow vests) movement in 2018, a movement … END_OF_DOCUMENT_TOKEN_TO_BE_REPLACED

Since the first incarnation of the EU an The Common Market, FRANCE has always been considered one of the bastions of European stability and a poster state for financial and political integration among European Union countries. But former Goldman Sachs banker Emmanuel Macron has thrown both France’s position as Germany’s chief sidekick and the dream … END_OF_DOCUMENT_TOKEN_TO_BE_REPLACED