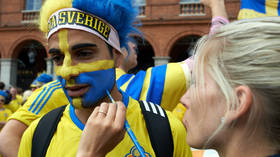 Before the match Italia-Sweden of the UEFA Euro 2016 cup, supporters from Sweden show pride in their national identity © Alain Pitton/NurPhoto via Getty Images
When the oh so clever boys and girs in the marketing department of Scandinavian Air Service (SAS) which tried to sell the airline on the back of the idea that Scandinavian identity doesn’t really exist, it was a step in left wing self loathing to far was a step too far for potential customers and the company was forced to go into damage control mode just hours after the launched.  A heated debate raged in social media and on radio phone – ins: what’s wrong with a national identity? caller after caller and comment after comment demanded.

The Nordic airline SAS needs to go back to the drawing board after it’s “Nothing is truly Scandinavian” advertising campaign crash-landed and abandoning the naïve, insulting premise that national identities do not exist would be the perfect starting point.

It was immediately obvious from the  torrent of vitriolic criticism the idiotic idea attracted was that Scandinavian punters were not on the same wavelength as the ‘woke’, university brainwashed imbeciles with their media studies and social science degrees who dreamed up the campaign.   Scandinavians were not at all happy at being told they should be tortured with angst about the lack of social justice in Afreekaaa, South East Asia and other third world shitholes, and racked with with guilt over the numerous acts of what the woke brigade insist on calling “cultural appropriation,” the adaptation of ideas from backward cultures that have not advanced much since the stone age, without which European civilisation could not have developed and  that north Europeans had previously, mistakenly thought of as the building blocks of their very own national identity.

Among the more ridiculous claims, and using a rhetorical device of the ill-informed, the campaign suggests that “rumour has it“ that world famous Swedish meatballs are actually Turkish. There is of course no evidence to support this in fact, as the classic recipes for Swedish meatballs use beef and pork and Turkey is a Muslim country, evidence suggests Swedish meatballs  did not originate in Turkey. Just about every national cuisine has a version of meatballs or meat patties. Except of course for sub Saharan national cuisines. I’ve been told by a half – Senegalese, half Swiss friend that in his experience sub Saharan African nations don’t have anything sophisticated enough to be called a national cuisine.

Why do the work brigade have to do this shit? Why are they so ashamed of the nations and social cultures that nurtured them that they constantly have to try to belittle those nations and cultures and, in this case,  shame a nation into believing that a popular dish is one they have stolen from some impoverished shithole country where people still live in mud huts and charring meat over an open flame is about as sophisticated as cooking gets? It’s the cheapest, nastiest, most unpatriotic campaign imaginable and the people who embrace such ideas are cheap, nasty, smal minded, self – hating, emotionally crippled virtue signallers.

The case here is that the campaign was the idea of &Co, an oh-so-self-aware Copenhagen-based agency shows the extent of self-loathing and guilt that exist in the liberal world of the creative class. Now if these cupid stunts want to kill themselves, that should be fine with sane people, the world always needs less arseholes. but to try to reduce the entire population of a global region to the kind of dysfunctional, self – pitying inadequacy that residents of the media bubble and supporters of far left politics exist in is bordring on criminal.

Perhaps their ham fisted (or meatball fisted maybe,) attempt to declare “What is truly Scandinavian? Absolutely nothing” should have been run past members of the public in Norway, Denmark and Sweden before they started disowning national treasures like sticky pastries, meatballs, marzipan sweetmeats and parental leave, because the ill-judged idea showed all the finesse of The Muppets’ Swedish chef at work on one of his more chaotic recipes.

Outside of the advertising community bubble people object to having their entire nationality excoriated, diced and served up as simply the sum of various parts because an agency with a lucrative airline contract has bought in to the hippy dippy, nineteen – sixties idea that the world is one big happy melting pot populated by multicoloured, gender fluid, easily influenced childbrains. Patriotism, the ‘woke’ crowd believe, is the thin-edge of the nationalist wedge, and identifying specific traits as belonging to only certain kinds of people is culturally disrespectful.

It’s utter bollocks of course, our history, the shared history of our nations is what makes us, and from the histories of our diverse nations and cultures comes the diversity that the ‘woke’ crowd are always screeching about but mistakenly think relates only to skin colour.

As the late Carl Sagan opined: “It pays to keep an open mind, but not so open your brains fall out”.

Because that is what has happened here. Nothing Is Truly Scandinavian is an example of the ‘woke’ crowd trying to impose a homogeneous, ersatz culture on the civilized world because the truth is they hate true diversity.

Immigrant criminals and Swedish criminals are viewed differently in the eyes of Swedish law.
We ask why it is, in Sweden, that when a Swede kills two immigrants it is an act of terrorism that shames the nation, but when an African immigrant kills a Swedish mother and her young child, in the eyes of the government it is somehow the victim’s fault? The big concern is that, given the desperation of our Conservtive and Labour party leaders to make us more European, such politically correct insanity will be inflicted in Britain next

Guess Which Political Grouping Wants To Legalise Incest and Necrophilia?
Has the headline sunk in. Yes it says there are people out there who want to legalise incest (brother /sister or parent / child sex) and necrophila (sex with dead people). Puzzled about who would want to legalise such repugnant things? I’ll give you a clue, they aren’t conservatives, libertarians or nationalists.

Worlds Biggest Luxury Liner To Be An Immigtant Hostel?
Ocean Gala, a luxury cruise liner which when launched was the world’s largest passenger ship will be converted into a floating hostel to house Sweden’s third world migrants. The only thing that may derail the deal with US Shipmanagers for floating migrant accommodation, would be failure to find a berth in any of Sweden’s large deep water harbours. Sweden’s open doors immigration policy has led to …

When Donald Trump, currently frontrunner in the contest to be Republican Party candidate in the USA’s 2016 Presidential Election, in a campaign broadcast commented that Islamisation of the west has gone so far parts of London are so heavily populated with Muslim extremists there are now no go zones for police and emergency services, he was attacked by politicians and the mainstream media.

Politically Unbiased BBC Launches Left Wing Attack On Donald Trump For Illegal Immigrants Stance
The BBC, Britain’s publicly funded broadcaster is bound by a charter which commits it to be balanced and non partisan in its news reporting. Repeatedly however, the BBC, its management now doniated by left wing luvvies is becoming more and more blatantly left wing in its unbiased reporting

Autumn Gets More Interesting As Merkel Admists She May Have Caused balkans War.
The autumn of 2015 has been interesting with the escalation of the war against ISIS by Russian air Force jets and Iranian ground troops in Syria and Iraq, Europe’s migrant crisis pushing prosperous north European nations towards civil unrest, and the downing of a Russian airliner over Sinai by as yet unknown causes though western intelligence reports suggest a terrorist bomb was planted on board before take off. And it is set to get more interesting …

Mediterranean Immigrant Composite
The flow of undocumented migrants from Africa trying to cross the Mediterranean from the coast of Libya to Italian, Greek and Maltese territory seems unstoppable. Two factors in the problem however have been western (particlarly American meddling in the internal affairs of African states, and wester aid leading to a population explosion national infrastructures are unable to cope with. And of course European leaders haven’t a clue how to deal with the problem.