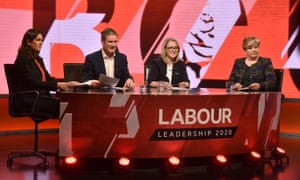 Picture Getty via The Guardian

Watched the motley crew involved in the Labour leadership race on TV this morning, apart from not having a milligram of charisma between them, they haven’t learned a thing from the election defeat. Their opening pitches sounded like a ravamp of Monthy Python’s “Four Yorkshiremen” sketch –

STARMER: Me Da’ worked in an engineering factory* and we was so poor I ‘ad t’walk all t’ way from Southwark to t’ private Grammar School in Reigate an back wi’ nobbut one clog to me feet. It cost me DEa’ a year’s wages every month to send me there but he were willing to make that sacrifice so I could get a good education.
(*Starmer’s dad did work in an engineering factory, in the boss’ office.)

LONG – BAILEY: Southwark to Reigate, 22 piddlin’ miles, that’s nowt, we were so poor I ‘ad t’ride a rusty owd bike with only one pedal 40 miles to Chester and back again every day to go to Chester Catholic Girls Grammar School, an’ I had to get up before I went to bed for t’ not be late next day.

LADY NUGEE: Well we were so poor that when Pater abandoned us to go to New York and be Assistant General Secretary of the United Nations we were so poor my cat had to be put down so we could have something to eat …

ALL: You ‘ad dead cat to eat! Luxury!

NANDY: I had a happy childhood until I learned there are working class people who say tans women aren’t real women at all, they’re just blokes in frocks, and I was so disgusted I had to join the Labour Party to fight for social justice. I mean if someone with tits and a vagina has the right to identify as a woman, people with dicks and bollocks must have that right too,

And so it went on, all admitted they had heard time and again in their constituencies that working class people felt abandoned by the party, and all showed they have no understanding at all of what the concerns of working class people are. Boris & Co must be jumping for joy after that debacle.

But it really is time someone who cares about started checking the claims of working class credentials made on the CVs of these wannabe Prime Minister.

This is nearly over – this weird disconnect between what most of us understand as reality and the world as seen through the eyes of an all pervasive Authority that was apparently appointed (although we never knew by whom) to establish the limits of public discourse. The crisis of confidence at the BBC – and make no mistake, it is a full blown, all alarm bells ringing, catastrophic crisis …

Police Failed To Act Against Muslim Grooming Gang Due To Fears Over “Community Tensions”
A new report based on the evidence of former Grester Manchester Police Detective Constable Maggie Oliver acknowledges that the force failed to stop dozens of girls being groomed and sexually exploited by a network of Pakistani men despite being fully aware of what was happening due to fears over creating “community tensions.” The report notes that the instruction to avoid prosecuting came “right from the top …”

Labour Leadership Contest: Bring On The Clowns
After their crushing defeat by Boris Johnson’s Conservative Party, instead of taking time to regroup and, as has been advised by serveral major figures on the centre left who stood down at the election because of the policies of far left leader Jeremy Corbyn, that they must reconnect with working class voters,the party factions are at each other’s throats already while the clowns bid for the leadership.

Election 2019: Stupid Labour Leaders And Supporters Just Don’t Get It

Today, as we, Labour haers all, wallow in schadenfreude after the crushing defeat that elitist party suffered in the election, we’ll have to rely on outside help in the form of a brilliant article from Shirelle Jacobs in the Telegraph and an equally brillian comment from Katherine Viners – Payczech (that sounds like a made up name, but whoever she is, congratualtions to the lady for her insight and pespicacity.

But the best summing up of the reasons for Labour’s failure are summed up in a comment made by a working class, former Labour voter in one of the old steel towns in the west midlands.

Election 2019: Stupid Labour Leaders And Supporters Just Don’t Get It

Today, as we, Labour haters all, wallow in schadenfreude after the crushing defeat that elitist party suffered in the election, we’ll have to rely on outside help in the form of a brilliant article from Shirelle Jacobs in the Telegraph and an equally brillian comment from Katherine Viners – Payczech (that sounds like a made up name, but whoever she is, congratualtions to the lady for her insight and pespicacity.

But the best summing up of the reasons for Labour’s failure are summed up in a comment made by a working class, former Labour voter in one of the old steel towns in the west midlands.

I will die an Anti Racist say Jew Hating Racist Labour leader Corbyn
As former Labour Party deputy leader Tom Watson rode off into the sunset, a good man but a discredited figure because he was foolish enough to let his hatred of the elite persuade him to believe the incredible allegations of a fantasist and attention seeker who claimed half the Conservative Party had abused him as a child in care …

Labour planned to privatise 40% of NHS as hypocrite Corbyn takes aim at Johnson
One quickly tires of Labour Party candidates and their supporters claiming the “The Wicked Conservatiovs plan to sell the NHS to private enterprise. They’ve been at it again throughout the current election cycle, and of course there is no more truth in the claims than there ever was before. But the lefties forget, as they glefully point at any conservatives whose heads appears over the parapet, yelling “Witches, burn them,” that the Labour government, between 1997 and 2010 under the traitor and war criminal Tony Blair privatised much of the NHS.

Boris’ cheap political stunt turns out to be a Labour stunt to discredit him
Labour supporting bloggers and talking heads are making a big thing of the confrontation between Boris Johnson and “a distressed parent who feels his sick child has been endangered because of Conservative’s neglect of the NHS The man accuse Johnmson of only visiting the hospital as a political stunt. In fact Omar Salem, the man …

Corbyn blames Boris and Tories for ‘rise of NAZIS’ in UK
Speaking during Labour’s Faith and Race manifesto launch, Jezza The Jew Hater said: “What we’re faced within this country, and across Europe and in the United States is a rise of the intolerant far right, the far right that can only ever seek to give out a message of division and hatred. They walk in the footsteps of the Nazis …

Former UKIP leader Nigel Farage, who s>uccessfully lobbied for a referendum on Britain’s future in the EU and then led the Leave campaign to a surprising (but only to the political establishment and mainstream media,) victory launched his new Brexit Party this week to get MEPs elected in May now it appears certain that Mrs May’s desperate efforts to overturn the result of the democratic vote have partially succeeded by gaining a delay in the date we actually leave.

UK Far Left Labour Party Splits Over Anti-Semitism and Brexit
As has been predicted for a while now, by both mainstream media and alt_news commentators, the UK’s far left Labour Party which has been torn by internecine conflict since current leader Jeremy Corbyn, the long serving Trotskyite Member of Parliament. Labour, which once styled itself The People’s Party now finds its core support among immigrant communities and university brainwashed media professionals, it has little need to concern itself with the white working class …

How Can The ‘Left’ Talk Of Equality When They Don’t Tolerate Diversity Of Opinion
One of the first things I learned at my Grandfather’s knee was the importance of free speech and of exposure to different ides and shades of opinion. Grandad had been a member of the Labour party before World War One and had lived through the class wars early in the twentieth century. My Dad was a Labour man too, until as a newspaper reporter, he learned things about socialism that shocked him.