Trawling around the weirder fringes of the web, as we bloggers and cyberjournalists are sometimes obliged to if we want to bring you the news the mainstream will not report, one occasionally comes across something important but disturbing – like being brought face – to – face with how sick and warped the far left ecopsychos really are.

Take a sketch recently broadcast as part of a satirical show the title of which translates as Bohemian Browser Ballet, shown by German state broadcaster ARD. Anyone familiar with the far left hate – fests passed off as humour on television this days will not be shocked, but be prepared to be disgusted. 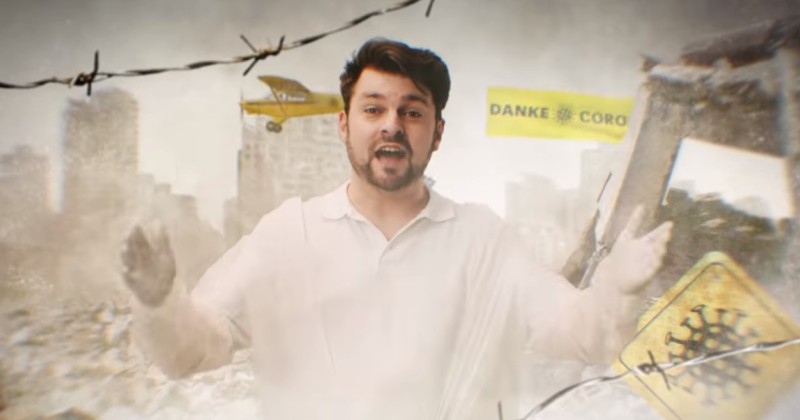 In a piece for German state television and styled as “satire” the show celebrates the coronavirus pandemic because it is killing the people in developed nations who the ecopshycos claim are responsible for climate change.

The show’s manic frontman enthusiastically yells that the planet is “practically healing itself” and the virus is “fair” because “old people are piling up while the young survive effortlessly.” Apart from not being true this is stupid in the way that only completely warped lefties can be stupid. Most old people infected with the disease are fine, while young children and people with underlying health problems are most vulnerable. But never mind, in bizarre world inhabited by members of the Greta Thunberg fan club, reality and delusion are interchangable.

“That’s simply justice, because for the last 50 years the 65+ generation has driven the planet into a wall,” the German presenter continues.

The vulnerability of people with cardiovascular disease, who are also dying of coronavirus in greater numbers than the majority of the population is also hailed as a good thing the show, because cardiovascular disease affects a lot of Americans, and America is deserves to suffer for the way it has fostered economic growth rather than returning humanity to a stone age lifestyle “to protect the planet.”.

The piece also applauds the collapse of air traffic and the reduced air pollution in China due to the shutdown of industry, claiming this will lead to a “green paradise” and that there are “too many of us” anyway.

“So the coronavirus is probably just a beautiful and sensible reflex of nature that shows humans who is actually in charge,” states the presenter before adding, “Corona is here, because we don’t deserve better.”

Whether the piece can be considerd satire or simply a vicious attack on people privileged to live in the civilised societies of the developed nations, it is a good example of what contemporary environmentalists and left wing activists actually think of their fellow humans, and remember – this is quite moderate by the standards of many Ekstinktion Rebellion crusties who hold views that are even more extreme and involved plans to simply kill members of groups who disagree with them. The real satire here is that these nasty, bullying weirdos call their critics Nazi and Fascist.

RELATED:
UK To Ask Citizens Over 70 To Self – Isolatate For 4 MONTHS As Coronavirus Fails To Kill Zillions
US John Hopkins University Prof Says Don’t Believe Coronavirus Numbers
Berlin shuts restaurants, bars, even brothels because of coronavirus