Skip to content
HomeCoronavirus: The Media Lies And The Public Backlash

No, Trump did NOT suggest injecting disinfectant to treat Covid-19 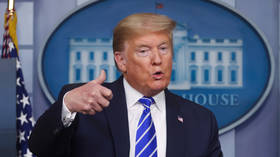 Picture © Reuters / Jonathan Ernst
Mainstream media fact-checkers have rushed to the rescue after US President Donald Trump mused that injecting disinfectant might cure Covid-19. Except he said no such thing, and claiming he did is the laziest kind of “fake news.”

Trump delivered a typically rambling riff on his medical advisers’ latest revelations on Thursday night, waxing rhapsodic about the possibilities of using UV irradiation inside the bodies of coronavirus patients. “Supposing you hit the body with a tremendous ultraviolet or very powerful light… supposing you brought the light inside the body, either through the skin or in some other way,” he said.

And then I see the disinfectant – where it knocks it out in a minute… and is there a way we can do something like that, by injection inside or almost a cleaning?

After hearing presentation President Trump suggests irradiating people’s bodies with UV light or injecting them with bleach or alcohol to deal with COVID19. pic.twitter.com/cohkLyyl9G

While Trump was clearly talking about generally finding a way to ‘clean’ the body on the inside like disinfectant does on the outside, his media nemeses seized on the words “disinfectant” and “injection,” and concluded that the president was suggesting the coronavirus-stricken be shot up with the likes of Lysol or Dettol. #Resistance Twitter, in the grand Orange Man Bad soothsaying tradition, took it half a step further to assume he suggested injecting “bleach or alcohol.” Some even grafted on references to the ancient “Tide Pod Challenge” meme … Continue reading >>>

A Global Backlash Is Coming… In Mostly Good Ways

Authored by Jeffrey Tucker via The American Institute for Economic Research,

Two months ago, it had been mandatory in my local grocery to use only shopping bags brought from home. Plastic bags were illegal by local ordinance.

Then the virus hit. Suddenly the opposite was true. It was illegal to bring bags from home because they could spread disease. Plastic bags were mandatory. As a huge fan of plastic bags, I experienced profound Schadenfreude.

It’s amazing how the prospect of death clarifies priorities.

Before the virus, we indulged in all sorts of luxuries such as dabbling in dirtiness and imagining a world purified by bucolic naturalness. But when the virus hit, we suddenly realized that a healthy life really matters and that natural things can be very wicked. And then when government put everyone under house arrest and criminalized freedom itself, we realized many other things too. And we did it fast.

Lots of people are predicting how life will fundamentally change in light of our collective experience this last month. I agree but I don’t think it will turn out quite as people think. This whole period has been an unconscionable trauma for billions of people, wrecking lives far beyond what even the worst virus could achieve. I’m detecting enormous, unfathomable levels of public fury barely beneath the surface. It won’t stay beneath the surface for long …  Continue reading >>>

I’m talking about, for example, the mainstream claims of discovering new viruses.

Crowe doesn’t lay on vague brushstrokes. He goes to the core of fabrications and exposes them, chapter and verse.

His new paper, which he continues to update and expand, is: “Flaws in Coronavirus Pandemic Theory”.

Here I quote from the section of his paper where he takes up the question of discovery—have researchers actually found a new virus which they assert is the cause of a new pandemic, COVID-19?

At the end of this article, I list the published papers Crowe refers to by number, as he takes apart the very basis of the COVID illusion.

David Crowe: “Scientists are detecting novel RNA in multiple patients with pneumonia-like conditions, and are assuming that the detection of RNA (which is believed to be wrapped in proteins to form an RNA virus, as coronaviruses are believed to be) is equivalent to isolation of the virus. It is not, and one of the groups of scientists was honest enough to admit this”:

“But, despite this admission, earlier in the paper they repeatedly referred to the 41 cases (out of 59 similar cases) that tested positive for this RNA as, ‘41 patients…confirmed to be infected with 2019-nCoV’.”

“Another paper quietly admitted that”:

“’our study does not fulfill Koch’s postulates’” [1]

“Koch’s postulates, first stated by the great German bacteriologist Robert Koch in the late 1800s, can simply be stated as”:

“* Purify the pathogen (e.g. virus) from many cases with a particular illness.
* Expose susceptible animals (obviously not humans) to the pathogen.
* Verify that the same illness is produced.
* Some add that you should also re-purify the pathogen, just to be sure that it really is creating the illness.” …   Continue reading >>>