Skip to content
HomeCovid-19 pandemic is all but OVER, we already have HERD IMMUNITY, says top Oxford scientist 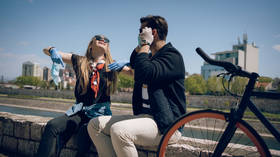 By Peter Andrews, Irish science journalist and writer based in London.

The UK government was one of many that reacted to the coronavirus outbreak based on worst-case scenario predictions. But the author of an alternative model has restated her position, saying the virus is already “on its way out.”

Sunetra Gupta is a professor of theoretical epidemiology at Oxford Univer5sity. Back in March, before the UK’s lockdown, she and her team published a study suggesting that the coronavirus may have infected 50% of the British population back in early March, before the lockdown measures were put in place. The model concluded that continuing on a path toward herd immunity would be the most sensible course of action.

Boris Johnson’s government originally chose to aim for a model like Prof. Gupta’s, just as those notorious irrational hotheads the Swedes were. It soon, however, gave in to public (read: Twitter) pressure. Boris called in that professional harbinger of doom, Imperial College’s Neil Ferguson, instead.

Prof. Ferguson’s model was nothing short of apocalyptic, featuring as it did half a million dead, and bodies piled up in car parks outside hospitals – everything but a yawning crevice in the ground and satyrs raining hell from the sky. So stark was the warning that he seemed to take it to heart, deciding to treasure a few moments with his married mistress while he could. For this small indulgence, he was eventually forced to resign from his post. But his thinking informs the government’s coronavirus policy to this day … Continue reading >>>