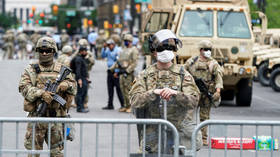 Over 50 percent of Americans would like to see the army deployed to the streets of US cities to help police tackle the riots raging across the country following the death of George Floyd at the hands of Minneapolis police.

The US has been gripped by a massive wave of protests for over a week, as hundreds of thousands of people took to the streets to call for justice for the African American man, who was choked to death by a police officer during a detention process.

While it might seem that the nation, or the larger part of it at least, has rallied behind the cause, a large number of Americans admitted they would not object to the military being deployed to aid the police in dealing with the protest actions that have spiraled into riots and violent clashes with law enforcement in many cities … Continue reading >>>

‘White Racism’
For too long the neo – Fascist left have been allowed to get away with dividing all of humanity into two racial groups, black and white. This has allowed those extremists who support the idea of an authoritarian, global government to dub white people generally as racist, because we have (again generally)been more successful

CIA Spearheads US Bid To Control Cyberspace, We Can All Help The Resistance