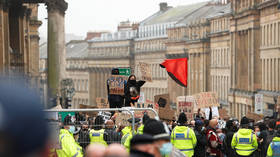 Black Lives Matter thugs protesting in Newcastle were met by a large crowd of counter protesters, that gathered to “protect” local historical monuments. The tensions escalated into scuffles between rival groups.

Large groups of counter protesters emerged in central Newcastle on Saturday, gathering around Grey’s statue and a nearby war memorial at the Old Eldon Square. Veterans and bikers protecting the war memorial in Newcastle, claimed they were also protecting a St George and the Dragon statue just down the street. Strangely the leftie mobs, mostly students and posh kids from the affluent suburbs gave those locations a wide berth and focused their hate on softer targets. Again typical of the left.

In Britain as well as the U.S.A. and other Western nations protests purportedly organised by anti racist groups to highlight police brutst blacks have become orgies of violence and hate as all the tpical tactics of the far left have shown who is really behind this outbreak of civil disorder. The violence started after the killing of  George Floyd, a career criminal, drug dealer and general arsehole in Minneapolis in late May. Floyd was no angel to be sure, but the manner of his death and the fact that he was apparently committing no offence at the time certainly gave grounds for outrage. However, there is no justification for ‘protests; involving  looting and destruction of property to spread throughout the USA or for far left neo – fascists throughout Europe and ion Asia and South America to join in, other than that stupid, ignorant, sociopathic leftie thugs can never resist an opportunity to cause trouble.

Intelligent virus? Anti – racism protests are safe byt anti lockdown protests spread virus, experts claimJune 3, 2020
Anti – racism protestors enjoy their immunity? It must be well known to our readers that the collective opinion of contributors to this blog on “scientists” and “experts” is that they are all wankers. This does not include practicioners of the sciences who have the self awareness to describe themselves as chemists, biologists, physicists, medical … END_OF_DOCUMENT_TOKEN_TO_BE_REPLACED

B***h, please! Banning ‘sexist’ language won’t make sexism disappear, any more than banning racial slurs killed racism
October 24, 2019
Far left activists, motivate by hatred of anyone who disagrees with them, campaign against ‘hate speech’ (that’s free speech to you and me.) A Massachusetts USA congressman wants to end sexism by punishing sexist language – specifically the word “b***h” – with fines and even jail. But policing speech doesn’t kill the underlying sentiment – … END_OF_DOCUMENT_TOKEN_TO_BE_REPLACED

Frustrated Civil Rights Leaders Say Facebook’s Zuckerberg ‘Lacks The Ability To Understand’ Race Issues
June 2, 2020
We must confess to not understanding this headline, how can any American lack the ability to understand the USA’s deep and destructive race problems when the key to understanding is so simple. If you are white you have no rights and it is your duty to kiss the arse of every black person you meet. … END_OF_DOCUMENT_TOKEN_TO_BE_REPLACED

Union of UK academics says you can identify as any race & sex
Warwick University graduates on the day of their graduation ceremony in Warwick, Britain July 17, 2017 © Reuters / Russell Boyce Birth race and gender can be thrown out the window as far as the UK Universities and Colleges Union is concerned. The fact that you can just declare yourself … END_OF_DOCUMENT_TOKEN_TO_BE_REPLACED

‘White Racism’
January 27, 2017 For too long the neo – Fascist left have been allowed to get away with dividing all of humanity into two racial groups, black and white. This has allowed those extremists who support the idea of an authoritarian, global government to dub white people generally as racist, because we have (again generally)been more successful throughout … END_OF_DOCUMENT_TOKEN_TO_BE_REPLACED