The vice chancellor of Oxford University has published an open letter suggesting Black students who feel traumatised by the killing of George Floyd, a black career criminal by a white police officerr in Minneapolis USA will be givern special treatment. What this means exactly is unclear but many commentators are suggesting black students may be given higher grasdes than their work has earned, thus giving them an incentive to make false claims.’ 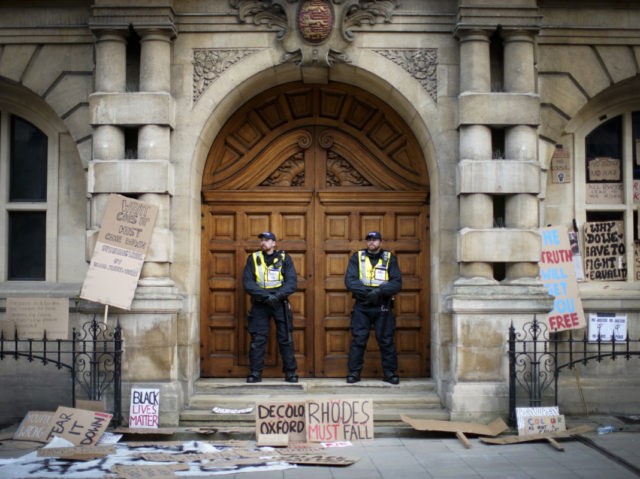 The city and university of Oxford is 3,959 miles away from Minneapolis, where Floyd died as an officer knelt on his neck, crusing the man’s windpipe. While Floyd was a known criminal it is clear he was neither wanted for not in the act of committing any serious offence. And even if he had been, there could be no justification for the way the officer treated him. However the territory occupied by Minnesota has not been under British jurisdiction for nearly 250 years so it is difficult to see how any British student could honestly claim to be traumatised by the incident. Appalled and disgusted yes, traumatised, i.e. profoundly affected in a personal was, emphaticaly no.

The United Kingdom has seen many local incidents which might reasonably be claimed to have traumatised students, ranging from the rape gangs which tortured and sexually abused underage girls right on the university’s doorstep in Oxford itself to, just 160 miles away, the slaughter and mutilation by a Muslim suicide bomber of dozens of kids attending an Ariana Grande concert in Manchester.

But now Oxford University, one of the oldest and generally supposed to be one of the finest in the world, has decided that the killing of George Floyd, which though shocking in its brutality, is an example of an everyday occurence in the United States. is of unique and global significance and warrants offering theraputic treatment to the student body accordingly.

The letter, signed by the university’s vice-chancellor Louise Richardson and all its Heads of Houses, begins:

Thank you for your letter expressing your concerns for the welfare of Black students at the University at this time. We are writing to you as a group of individuals who care deeply about our University: we appreciate you writing to us, not least because we share your concerns about the traumatic effect of the brutality which killed George Floyd and which is a manifestation of institutionalised racism. The collective failures to address attitudes and behaviours which amount to discrimination are still prevalent in many institutions, including higher education.

The letter does not give any examples of ‘attitudes and behaviours which amount to discrimination’ which it claims are still prevalent in ‘higher education’ – nor does it explain how these are linked to the Floyd murder because that would be impossible.

All in all, it is just another example of how the elites, ever contemptuous of the white working class in the liberal democracy are happy to pander to far left extremism and black supremacist thuggery. Ironically many of those who would be happy to give our civilisation into the hands of black overlord are themselves white, pathetic, hypocrital, self – hating losers from affluent backgrounds who try to gain a little self esteem by demostrating how guilty they feel about things done by their country’s leaders hundreds of years ago. They neeed to tread carefully, the working class people are tired of being shat on and angry at the condescending way lefties treat them, are getting very angry.

MORE on Race and Racism issues

June 3, 2020 Anti – racism protestors enjoy their immunity? It must be well known to our readers that the collective opinion of contributors to this blog on “scientists” and “experts” is that they are all wankers. This does not include practicioners of the sciences who have the self awareness to describe themselves as chemists, biologists, physicists, medical … END_OF_DOCUMENT_TOKEN_TO_BE_REPLACED