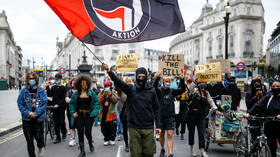 By Graham Dockery, Irish journalist, commentator, and writer at RT. Previously based in Amsterdam, he wrote for DutchNews and a scatter of local and national newspapers.

As Britain imposes local lockdowns, a newly released study suggests the UK is a hair’s breadth away from devastating riots. However, the government was warned about this a long time ago, and apparently chose to proceed anyway.

When the British government’s policing and security advisers met in London on July 2, their tone was serious. Racial and societal tensions, they warned, had reached boiling point in the UK, and the re-imposition of coronavirus lockdown measures could ignite this powder keg and trigger riots unseen since the mass unrest of 2011.

If this happens, the advisers warned, police would be unable to contain the chaos, and “military support” would be required to restore order.

The advisers’ concerns were laid out in a paper, published on Friday by the government’s Scientific Advisory Group for Emergencies (Sage). However, in the month between the meeting and the publication, the government seems to have disregarded some of its key recommendations. Localized lockdowns have been reimposed, with Health Secretary Matt Hancock announcing on Thursday that people in parts of Greater Manchester, West Yorkshire and Leicester would not be able to meet each other indoors.

As the Coronavirus rolls on with every trumpeted breakthrough fizzling out into a great big nothing, political leaders and media ‘influencers’ keep telling us we must follow the science. Yet with so much contradictory and conflicting evidence, perhaps it’s time we learned that “following the science” is the worst thing we can do? The Daily Stirrer has been telling you since the start of the farrago that scientist is a synonym of wanker,

Covid 19: Statistics, Lies and the Corruption Of Science.As the COVID — 19 pandemic continues to dominate the news and defy the efforts of researchers to understand its many mysteries, including its origins and why it affects people who contract the virus in wildly different ways, one thing we have learned for certain so far is the extent to which the Pharmaceuticals manufacturers cartel (colloquially Big Pharma,) exercise a pernicious influence over medical research and healthcare.

COVID19 PCR Tests are Scientifically MeaninglessPoliticians and “experts” scream and shout about testing and isolation being the way to halt the COVID 19 pandemic to a halt, but everything else they hsve told us about the disease has been absolute bollocks, why should this be any different?
Well surprise, surprise, it isn’t any different. The idea that testing everybody ten times a day (OK I might be exaggerating for effect,) will do any good is just another diversionary tactic …

Coronavirus: Fear and Panic and a Globalist Power Grab

World Leaders Insist ‘Economic Lockdowns Ravage the Very Fabric of Societies’
An impressive array of more than 500 prominent world leaders, academics, and Nobel Laureates have written “A Call to Defend Democracy” in the face of a worldwide rise in government authoritarianism during the Wuhan coronavirus pandemic. The June 25 text declares that beyond health concerns the COVID-19 pandemic is “a political crisis that threatens the future of liberal democracy.”

Oxford Covid Vaccine Fails But Big Pharma Will Sell It Anyway
Many highly – placed members of the lockdown forever cult, Bill Gates among them, have been spreading the idea that lockdown must continue until a vaccine for COVID – 19 is available because only a vaccine can save us. More level headed types (i.e. those of us routinely dismissed as conspiracy theorists, have warned that as the virus affects the upper respiratory tract and nasal passages, where there can be no antibody response it is unlikely there will ever be an effective vaccine …