Skip to content
HomeAustralia The First Advanced Nation To Go Full On Fascist – COVID19 Vaccinations Will Be Mandatory.

Many of us who contribute to new media news or write independent blogs have been warning since March that all the lockdown, mask wearing and  social distancing rules imposed by governments as part of the ‘response’ to the wholly manufactured Coronavirus crisis were in fact leading towards the suspension of all our rights and liberties and the implementation of authoritarian rule.

It now seems that among the economically developed nations Australia is leading the way towards fascism; from arresting surfers on empty beaches, to telling people they can’t even go out jogging, to police detaining mothers for merely letting their children play on citizen owned public playgrounds.  We were dismissed as ‘conspiracy theorists’ when warnings were raised that such authoritarian measures would quickly lead to  forced vaccination programmes the moment a vaccine that does not kill too many people is available, despite the very serious safety concerns about using vaccines that have been rushed through development and clinical testing, or the various potential long-term side effect ‘unknowns’… well,it’s happening:

Australians are likely to face mandatory coronavirus vaccinations if Prime Minister Scott Morrison gets his wish.

The nation is a step closer to gaining access to a vaccine, with the Federal Government securing an international deal to produce a vaccine frontrunner locally if trials succeed.

If that happens, Mr Morrison expects Australians will have to undergo mandatory vaccination.

Other developed nations will withouit doubt quickly follow on the road to authoritarianism, given as we’ve detailed we’re already to the point of colleges, schools, and office spaces in many instances requiring as a condition of return to campus or work space a COVID-19 test, or in some cases individuals are subject to weekly tests. Based on the trend, these current testing requirements will seamlessly switch to vaccination requirements, as will apparently likely happen in Australia. And all this is justified by the need to save us from a disease that infects only a tiny percentage of the population, and only kills a tiny percentage of those it infects. And of the peoplw who have died, over 90% are both old and chronically sick anyway. 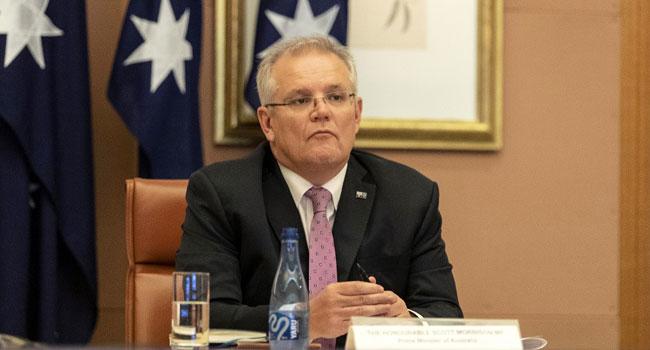 “There are always exemptions for any vaccine on medical grounds, but that should be the only basis,” he added, clearly already attempting to bat down instances of vaccine objectors and other individual liberty or religious-based arguments.

“We are talking about a pandemic that has destroyed the global economy and taken the lives of hundreds of thousands all around the world, and over 430 Australians here,” the Australian leader added.

The message is clear then, those who refuse the vaccine in Australia will be rounded up by the State Troopers, taken to a secluded spot outside town and taught that dissent is verboten.

Resist now, or it will soon be your country where this is happening. And it will not stop at vaccinations.

Remember the words written by Pastor Martin Niemoller about the rise of Naziism in 1930s Germany:

RELATED:
Hundreds arrested during anti-lockdown protests in Australia
31 August: Throughout the pandemic of fear one of the big surprises has been the way Australians, known for being a nation of independent minded, outspoken, awkward bastarts have meekly accepted some of the most opressive restrictions on personal freedom and civil liberties, but it seems things may be changing as the Aussies say “enough” … Continue reading >>>

Brexiteer Steven Woolfe: EU needs to ‘learn about democracy’
MEP Stephen Woolfe, a prominent figure in the UKIP campaign team during the referendum run up has claimed the European Union needs to “learn about democracy” in cos he mademment on Foreign Secretary Jeremy Hunt’s remarks comparing the European Union to the Soviet Union. Woolfe claimed the Foreign Secretary’s remarks were a “strong message” to … END_OF_DOCUMENT_TOKEN_TO_BE_REPLACED

So there you have it, the ‘radical left’ are sponsored by one of the nastiest, greediest corporate capitalists ever, a shameless advocate of global totalitarian government proposed by theelistist socialist group The Fabian society over a hundred years ago and towards which these supporters of ‘oligarchical collectivism’ have been working ever since.

In Parallel With The Upheaval In European Politics, A Similar Cataclysm Is Happening In The USA
Having reported for three or four years now the rise of the anti – Integration parties in European Union member nations, UKIP in Britain, the FN in France, AfD in Germany, Denmakr’s Peoiple’s Party, Five Star and the Liga Nord in Italy, the Sweden Democrats and others in every E U member state, we now look at what is going on in the USA as campaiging for the presidential election gathers pace.

War On Cash – A Country By Country Guide

More on the global war on cash being waged by ruling elites in parallel with their war on privacy as they try to exert total control over everything.

EU Stitch Up To Promote Euronazi Selmayr Is Typical Of The EU’s Contempt For Democracy
“2018-03-15T20:12:22+00:00”>
Martin Selmayr – would you buy a used car from this man? (Image: Daily Mail) The former Prime Minister of little Luxembourg (population less than Leicester,)Jean-Claude Juncker who now struts the world stage as if he is important, has worked one of the slimiest political stitch ups ever to ensure his favourite sycophant and chief … END_OF_DOCUMENT_TOKEN_TO_BE_REPLACED

Re-Branding Dissent – The Quiet Destruction Of Democracy
Many people, all the contributors to this publication among them, fear that democracy is being destroyed. OK, OK, hipsters will say but ‘we’ve never had democracy’, or, ‘it was destroyed long ago’, but left wing deceit aside, I think its worth actually thinking about how, many forms of democratic expression, effective dissent and peaceful self-determination are being outlawed and abolished in a sustained attack on free speech and civil rights.

As the General Election campaign starts to heat up, we try to shift focus away from the squabbling between Conservative and Labour about who can make the most promises they have no intention of keeping and to the real issues concerning jobs, social breakdown , mass immigration, and loss of national sovereignty.

US Presidents Of The Past warned Against Secret, Shadow Government.
By now it should be obvious that peacemake, joybringer and putative aquatic pedestrian Barack Hussein Obama was never really in charge of the US Government. Whatever Obama said would happen, all the American government’s policies ensured the opposit would happen. The embedded article thows some light on how the US government really works

Having written a book on the evil trade treaty that will transform the democratic nations into corporate oligarchies, we step aside and hand the baton to Jim Hightower of Alternet who is equally outraged about the iniquities of TTIP’s equally evil twin, TPP.

Google Has Become A Threat To Democracy
Authored by Mike Krieger via Liberty Blitzkrieg blog, About 10 years ago, Tim Wu, the Columbia Law professor who coined the term network neutrality, made this prescient comment: “To love Google, you have to be a little bit of a monarchist, you have to have faith in the way people traditionally felt about the king.” Wu was right. … END_OF_DOCUMENT_TOKEN_TO_BE_REPLACED

Another Reason To Get Out Of EU. UKIP MEP Hits Out At Fishing Policy That Penalises British Fishing Crews

As the General Election campaign starts to heat up, we try to shift focus away from the squabbling between Conservative and Labour about who can make the most promises they have no intention of keeping and to the real issues concerning jobs, social breakdown , mass immigration, and an often overlooked area in which our EU membership has perhaps done more damage than any other, the fishing industry.

Democracy: Does It have A Future Or Has Global Totalitarianism Won?

The General Election in Greece (January 2014) could have much wider effects than most elections in small nation, the vote could decide the future of the European Union and have a major breaing on whether democracy can survive the push towards government by a global, corporate oligarchy. It look like being an interesting few months if the anti – EU party wins as polls suggest they will.

Democracy Hating Leftie Judges Choose Self Interest Over Justice
Yesterday judges in the UK High Court joined the band of traitors in Parliament, the Civil Service, the Bank of England and the media who are trying to overturn the democratic vote to take Britain out of the European Union. The judges ruled in favour of a challenge to the vote, even though it has … END_OF_DOCUMENT_TOKEN_TO_BE_REPLACED

Greece Votes On Whether Its People Have Any Future
The voters of Greece will choose today, whether their country, the cradle of democracy, has a future of not. They are voting in a general election which could result in Greece trying to renegotiate the terms of its bailout with international lenders and even quitting the EU if the expected victory for hard line left wing party Syriza.
The leader of Syriza, Alexis Tsipras, has pledged to write off much of Greece’s huge debt and revoke austerity measures …

Over the past week the whole media circus, mainsteam and broadcast, new media, bloggers, the world and his dog, was getting excited about the revelation that traditional tax haven but also founder member of the EU, Luxembourg has been facilitating wholesale corporate tax dodging and this ‘business’ was given the all clear by the then Prime Minister of the Grand Duchy,

European Commission puts business profits before the needs of the world’s poorest.

While the left try to win elections by creaming ‘racist’ and ‘bigot’ at anyone who disagrees with their pro – EU, pro – globalisation, immigrant – loving, gay – loving, paedophile loving authoritarian agenda, thus pissing off the social class who make up the Labour Party’s core vote, the thinkers amongs us are seeing the European Federalisation, Agenda 21, Global Government project for what it ius … Adolf Hitler’s dream come to fruition

Corporate powers and the United Nations are planning on privatising water resources including rainfall, yes you did read that right, privatising the rain. The CEO of food processing bastards Nestlé spoke of the plan last year when he said companies like his had a right to make money from sellling OUR water, now those Stalinisdt shits at the United Nations and The World Bank are planning to steal the stuff life depends on.

Representative government Is Being Replaced By A Global Technocracy

When Peter Mandelson, the architect of the New Labour project that gave Britain it’s most authoritarian government in three hundred years and sold out national sovereignty to supranational bureaucracies, says that representative democracy is dying, he does not sound as if he will be one of the chief mourtners. What can we do to rescue our democratic freedoms from smooth faced technocrats like Mandelson?