British road users have finally run out of patience with the disrputive protests of eco – terrorists Insulkate Britain. The protests, which involved blocking busy roads, preventing people getting to work and stopping businesses from trading, have seen road users become  increasingly angry at the demonstrations held by Insulate Britain on the M25 London orbital road and other motorways and trunk roads. In spite of court injunctions giving police extra powers to remove and arrest protestors the cops, as usual when dealing with far left groups, are pussyfooting around. This has led to some motorists to take things into their own hands and video posted on social media has shown road users dragging eco crusties off roads none too gently. 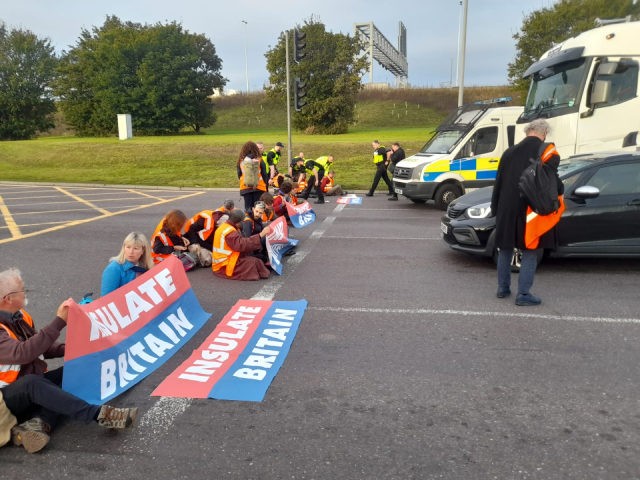 Another video on Twitter depicted an angry SUV-driving mum screaming “I’ll drive through you, then” after the protesters blocked her path as she took her 11-year-old-son to school.

Essex police said that 35 arrests were made, with 16 people detained at Junction 31 of the M25 and 19 at Stonehouse Lane, Purfleet.

Insulate Britain’s thirteenth demonstration coincides with the release of a report from the charity Shelter which found that the health of one in five renters (22%) in England, equivalent to almost two million households, is being harmed due to poor housing “because they are mouldy, cold, unaffordable and grossly insecure.”

UK Home Secretary Priti Patel announced last week that the maximum penalties for disrupting motorways would be increased and that Downing Street would “criminalise interference with key infrastructure such as roads, railways and our free press.”

There were violent clashes when the attention seeking posh kids of IB halted traffic on a busy road near the Dartford Crossing and a junction of the M25 on Wednesday, with around 40 activists involved in the blockade, some employing the favoured tactic of supergluing themselves to the road surface.

One video showed an enraged motorist attempting to pass a demonstrator who stood in front of his vehicle, as the driver of the adjacent car got out and dragged another Insulate Britain member out of the way by their backpack.

A lorry driver shouted “I’ve got a business to run” and aggressively honked their horn multiple times. People could be seen yanking protesters out of the way, with no reported police presence in the area at the time.

National Highways Agency was granted a third High Court injunction against protesters at the beginning of October, under which activists could face imprisonment or an unlimited fine if they stage demonstrations on the 4,300-mile Strategic Road Network linked to the M25 in the South East. It is difficult to see what difference this will make unless our increasingly politicised police forces when dealing with the eco – wankers start to show similar levels of enthusiasm for violence and rough tactics as a regularly used when dealing with people protesting lawfully against vaccine passports and mask mandates.

Green Dreams Menu
It may be driven by virtue signalling or self hatred but the urge to destroy civilisation in order to save the planet and the ideological agenda that drive the gree movement are too far removed from the realities of life to ever achieve their aims.

Have You Committed Your Three Thought Crimes Today?
You’re a criminal. So am I. We all are, according to some legal experts there are now so many crimes, a lot of them loosely defined, it is impossible to get through the day without committing at least three crimes. In fac it is often the case that by obeying one law you are breaking another.

“F**K The Jab, Long Live Australia” – 20,000 Shut Down Melbourne Highway In Massive Lockdown Protest
Anti-lockdown protests have become commonplace in Australia since the latest round of “snap” lockdowns began two months ago although you wouldn’t think so if you rely on mainstream media for information about what’s going on in this increasingly insane world. Newspapers and broadcast news channels have almost totally blanked stories reporting the pushback against the Australian government’s increasingly authoritarian measures

Evidence of Problems With Covid Vaccine Grow And Te Real Agenda Becomes Clearer.
Mainstream media have been distracting us with stories of successful mass vaccination campaigns, but as ever things are not quite what they seem to be and though the claimed 999% take up of the vaccines is not verifiable, the deafening silence regarding the huge numbers of serious adverse reactions to all type of vaccine and the significant numbers of unexplained deaths which have occured soon after people reveived the jab suggest there will be worse news to come in the future …

And The Hoax Goes On …
Every time we dare to think we see a bit of light at the end of the tunnel (or any of those others cliches we use to indicate a bad time is coming to and end,) The Elites who have been driving the pandemic for their own ends come up with a new twist on the scaremongering to keep project fear rolling along. The lies just keep rolling out as the economic and social damage is swept under the carpet …

Politicians Are Offering A Trade, Safety For Freedom. But What Are We Really Trading Away?
It’s the age old confidence trick, politicians and the elites offter a straight choice between security of freedom and all the risks it entails, then amplify those risks with scaremongering propaganda. In the case of the COVID crisis it has worked so far, with enough people accepting the need for masks, lockdowns and killer vaccines to make The Great Reset seem feasible – but time is running out and people are waking up …

Globalisation And The Destruction Of Civilisation
Despite repeated assertions that this blog does not align itself with either of those anachronistic labels, left and right, our oppositions to globalisation (an attack on benefits the early trade union movement fought for,) and our support for controlled borders and strict vetting of immigrants we are often accused by those who like to label themselves ‘left’ (because it sounds cuddlier) …

Globalisation And The Destruction Of Civilisation
Despite repeated assertions that this blog does not align itself with either of those anachronistic labels, left and right, our oppositions to globalisation (an attack on benefits the early trade union movement fought for,) and our support for controlled borders and strict vetting of immigrants we are often accused by those who like to label themselves ‘left’ (because it sounds cuddlier) …

Can Americans Overthrow The Evil That Rules Them?
The anti – establishment, anti – globalisation mood that manifested itself in the Brexit vote is sweeping across Europe, the cosy government – corporate cartel is desperately trying to control the narrative, but against the combined strength of millions of new media commentators all challenging the official; narrative, the dark forces of globalism are on the back foot.