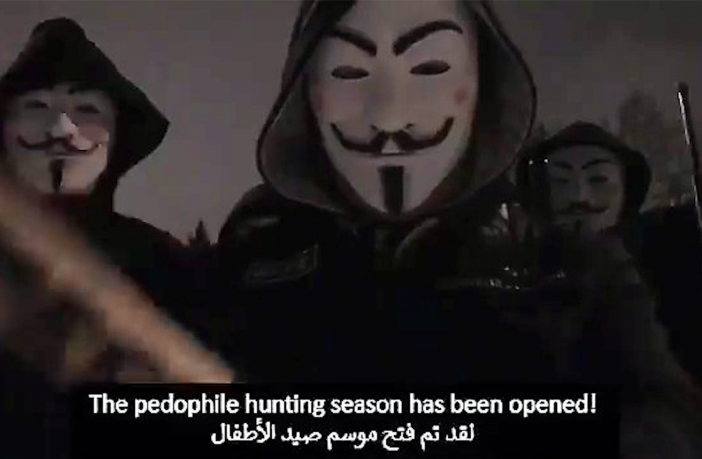 The video, subtitled in English and Arabic, has since been deleted from both Facebook and Vimeo, shows a group of masked men dressed in dark, armed with bats and chains march towards to the camera amid winter darkness, accompanied by heavy metal music.

The man at their head acts as a spokesperson and announces that “The pedophile hunting season has been opened!”

The speaker claims that their targets are the “sex tourists who have invaded our country” and “hunt our children”. And explains that the Soldiers of Odin are going to take justice into their own hands, since “the authorities and the politicians do nothing”. 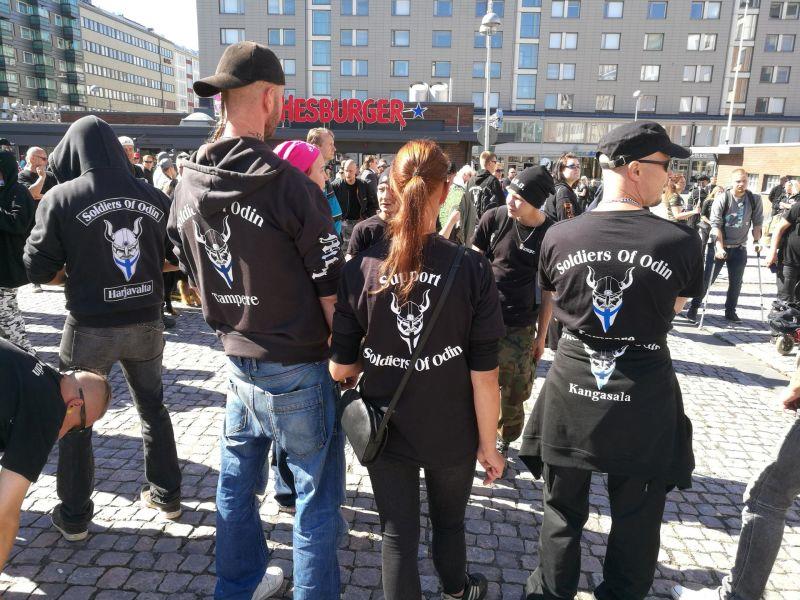 The Soldiers of Odin also say that half of the sexual propositions to underage girls in their city came from Arabs. However, the group stress that the hunt is open for “domestic pedophiles and rapists of all colours”. \the pattern of a huge incresse in sex crimes against \european women has been repeated across Europe, most notably in Sweden, Germany and Britain

The Soldiers of Odin do not intend that Finnish men will be seen as so emasculated by politically correct indoctrination they have lost the testicular fortitude to defen their women and girls, as the sokesman explained quite forcefully.

“We guarantee you that a date with us will be memorable. And hey, don’t worry, we won’t call the police”, they state.

The video is a response to the cases of sexual abuse of minors perpetrated in Oulu and Helsinki by a group of foreigners, who have been arrested by the police.

The National Police Board has asked the Helsinki Police Department to assess whether a hate crime toward ethnic groups should be suspected and to determine which preventive and other measures should be taken regarding the publication.

The Police Board says that; “suspected crimes cannot be systematically responded to with serious offenses”. And; “responding to sexual crimes with crimes of violence does not help in the protection of human life and health or contribute to public safety.”

As usual, as we have seen in Britain, Germany, Sweden, Italy, Netherlands, Austria, Belgium, the authorities hide their inaction in reponse to sex crimes by followers of The Religion Of Hate And Misogyny behind weasel words. The hate crime is not telling the truth about migrant crimes, the hate crime is the contempt for free, independent women followers of that religion feel.

submitted by an Author Of The Storm (In the book referred to in this article a Dickensian type character refers to the heroes as ‘authors of the storm’ having confused the title of the French story ‘Orphans of the Storm.’)

It is a major embarrassment for the UK’s Labour party, the party of elitists, academics, lawyers and the kind of people who even though they do not know you at all are certain they know what is good for you better than you do yourself.

Once upon a time the Labour Party was a truly working class movement, men with cloth caps and vowels to hard they could cut concrete and strong women with almost invisibly thin lips and megalitic arses who got into politics to campaign for equal opportunities for all.

The the do – gooders, the pious, self righteous, holier-than-thou brigade jumped on the bandwagon (well their previous territory, religion was losing popularity faster than Ken Livingstone at a Bar Mitzvah,) and suddenly The Labour Party was no longer the party of the poor, the disadvantaged and the downtrodden, but had become the party of the hand wringing, breast beating guilt addicts who CARED about the working class and were determined to help them, whether the working class wanted the kind of help on offer or not.

And now the Labour Party, which was always opposed to prejudice against any minority groups except The Conservatives and The Liberals, found itself, because the do – gooders had enshrined love of minorities as one of the movements sacred cows, in positions where it felt obliged to support two separate minority groups that were united by a deep and long lasting mutual hatred.

Thus it was that the Labour Party found itself on the horns of a dilemma over anti – semitism. The Jewish communities of London, Manchester, Leeds and Liverpool had been one of the driving forces behind the rise of the Labour Party in the first half of the twentieth century and for that reason enjoyed a special place in Labour folklore. In recent years however, the gentle, secular Judaeism practiced in European nations has been the subject of a lot of suspicion because the Zionist (Jewish nationalist) attitude of Israel and their abominable treatment of the Muslim Palestinians living in Israel had led many people, and especially many Labour hand wringers, breast beaters and do gooders to blame all Jews for the actions of Israeli extremists (in much the same way as for most of the last 2000 yeas Christians blamed all Jews for the killing of Jesus (who probably didn’t exist but if he did and if he was crucified, was killed by the Romans because Pharisaic law had blasphemers stoned, while Roman law called for seditionist to be crucified). But I digress.

So now we have half the Labour Party supporting the Palestinians and saying what a bunch of cunts the Jews are (they mean Israelis and even that is not true because it’s a generalisation,) and the other half saying we should be nice to Jews because they have been oppressed and downtrodden.

The Conservatives are happy, the Lib Dems are happy, The Greens are happy and UKIP are happy. Labour? Well they are dopey, grumpy and probably sneezy, sleepy, and bashful. George Galloway thinks he’s Doc but few agree with him.

Even though I’m not a Labour supporter (and for the benefit of those with a binary mindset, that does not mean I’m a Conservative) I’ll pass on to the party some advice from Terry Pratchett’s novel Dodger:

So there you have it. If Labour want to be a coherent party they need to dump the self rightousness, gag the do gooders and stop siding with minorities. The ordinary people who make up the majority have rights too. There’s no way of being on the right side of the Arab / Jewish problem, they’re all Semites so whichever side you are on you are being anti semitic against one lot or the other.

(FYI:- Semites, the children of Shem son of Noah are the people of the middle east; of his other two sons, the Hamites, children of Ham, populate north African and the Japhetites (Europeans [us] are the children of Japhet. That probably does not make any sense to you, it doesn’t to me, but to a lot of people apparently, it is so important it’s worth killing for.)

The cold light of reality is starting to shine on those who gathered in the newsrooms of media organisations to worship at the shrine of The Obamessiah. While the more fundamentalist members of the news community are today proclaiming the great breakthrough achieved by the Chosen One on the Arab / Israeli peace issue, others are seeing the news for what it is.

Team Obamas claim to have paved the way to reopening of negotiations is based on Americas giving Israel exactly what they want while Israel gives the west nothing.

In order to secure concessions from Israeli Prime Minister Bibi Natenyahu, Obama has said the US will impose trade sanctions on Iran until the mad mullahs scrap their nuclear weapons program. This will drive up the price of oil in western markets as traders deprived of access to Irans supplies force up the price of what oil is available. Meanwhile Russia and China, as always will play their own games and if they can buy Iranian oil at a good price they will. So the Iranian people will be hurt, western businesses will be hurt and the Iranian regime will not be hurt a bit.

Now who else have we seen manipulate foreign policy so masterfully in recent years? Oh yeah, that bloke named Blair.