Every now and then we bloggers who take a sceptical line (and I mean true scepticism, i.e. questioning everything, taking as little as possible on trust) will come across a genuine, 24 carat, card carrying barm pot (probably a university lecturer, ‘scientist’ or senior school teacher who thinks he/she though usually he, is being incredibly clever by asking the most naive, stupid arsed questions imaginable of anybody who dares to question of challenge the “gospel truth” of official propaganda.

Yes I am talking about the kind of cupid stunt who still believes carbon dioxide emitted by human activity is causing catastrophic climate change havind read, he claim, a Boggart Blog post that includes a link to a new study which confirmed the finding of a 1951 research project that shows carbon dioxide is not a significant greenhouse gas.

Here’s the Boggart Blog post and Here’s the peer reviewed study it refers to:

‘Determining the Total Emissivity of a Mixture of Gases Containing Overlapping Absorption Bands,’

Right, so my source is rock solid and my somewhat hyperbolic presentation is eff all to do with anybody else, particularly the kind of bell – end who thinks it’s really smart to ask “who exactly are the establishment,” by which question the visitor shows he has no idea how the ordinary punters who read my blogs talk to each other.

I wonder then what this person would make of The Shadow Government, which I am blogging about today:

America Being Run By Unelected Elite

America is being run by an unelected gang of essentially self-perpetuating PhDs.

The notion of an economics coup d etat is not so far-fetched. After all, the Eccles Building controls the levers of the nations fiscal policy; is the pied piper of the entire financial system; intentionally inflates financial bubbles which powerfully impact the distribution of wealth and income; and is the master builder of the nations towering edifice of $59 trillion in credit market debt that flattens growth, jobs and incomes on Main Street.”

“To take one case in point, consider further the matter of fiscal policy and the Washington machinery by which $4 trillion of economic resources are allocated directly, and countless trillions more indirectly owing to tax policy and Federal matching grants. This entire apparatus is now frozen in place because the Feds QE policy amounts to a giant fiscal fraud. Even if it sticks to the taper, the Feds balance sheet will have expanded by 5Xfrom $900 billion to $4.5 trillionin 70 months.”

“Yet it has no intention whatsoever of unwinding this stupendous emission of fiat credit. Indeed, selling-down its massive piles of treasuries and MBS would ignite the mother of all melt-downs in the fixed income markets, which have gorged on over-valued paper that was priced by the Feds huge, artificial bid in the debt markets.”

“So if this $4.5 trillion balance sheet is permanent, then the Feds post-crisis money printing spree amounts to a massive monetization of the public debt. Too be sure, all of this was done in the name of rubbery abstractions like accommodating recovery, supporting the labor market and stimulating consumption and investment spending, but the real world effect was quite different and far more tangible: It allowed Washington to treat the financing cost of our $17.5 trillion national debt as a free good.”

Read more: America being Run by An Unelected Elite

The idea of nations being run in reality not by elected governments but by a cabal of corporate leaders, bankers and for want of a better term, “old money” is hardly novel. For years those naive fools who delude themselves they are intellectuals denied the existence of The Bilderberg Group, now thanks to incessant pressure of “nut jobs and conspiracy theorists” we know it does although they still do not offer press releases, minutes of their meetings or an official annual report. Which gives the real conspiracy theorists, the thickos who support officialdom and worship power and authority trying to sell the line “Ah but you can’t PROVE they are not just a bunch of rich people getting together for a jolly old chinwag over coffee and cake can you?”

Well no, we can’t, and we can’t prove that these wannabe elitists really despise the masses they pretend to care about. But while the science heads and academics ask us to accept their word backed up by the flimsiest of evidence, I go for the legal term “beyond reasonable doubt.” And I can say, on the balance of evidence it is beyond reasonable doubt that whatever the elite (The Establishment) get up to in secret is not in the best interests of we the punters.

So Boggart Blog will keep questioning. Join us.

The government of control freaks are keeping up their fear and panic campaign to turns us all into gibbering wrecks who cower in fear of swine flu. Boggart Blog has always said this scare is simply about making money for drugs manufacturers. Well now we can prove it.

Take a look at the picture below of some Swine Flu germs. 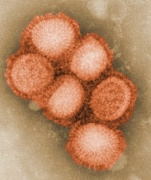 They look like mince pies don’t they? And the medical authorities try to tell us it is not a seasonal disease. What could be more seasonal than mince pies.

Boggart Blog says stop worrying about Swine Flu or H1N1 as we are now supposed to say to distinguish it from Avian Swine Flu (if you know what I mean). It might make you put on a few pounds but who doesn’t in December.

There are some funny things going on in the world, unseasonal rainfall and catastrophic flooding in the American mid-west, drought in California, hoards of ravenous slugs eating our gardens in suburban Britain, strange, unpleasant smells smells hanging over Belgium (trust us: you will not love the smell of Belgium in the morning) locusts in Africa, exploding toads in Hamburg, plagues that are almost biblical in fact.
And on the coast of Canadian province, British Columbia, close to Vancouver they are afflicted by a plague of feet. Legless, bodyless human feet that is. In recent months five severed feet have been found washed up on the beaches of the province.

Now Oscar Wilde might have dismissed this by saying: To lose one foot is unfortunate, to lose five is physically impossible. So in the absence of any evidence to suggest that a foot fetishist serial killer may be on the rampage, what could be going on?

The usual suspects in cases like this are gangland ritual executions (Luca Brazi sleeps with the socks) discarded pet crocodiles that have grown to maturity in the sewers, spontaneous human combustion and flesh eating bacteria created by a mad scientist played by John Malkovitch. Such things are possible in fiction but dont stand up in reality.

One blogger has suggested the culprits are mud crabs imitating human behaviour by discarding the feet just as we discard feet when eating crab and lobster. Interesting idea but not very likely. Other suggestions from the blogosphere are just too silly to report.

Up to now the Vancouver office of the Royal Canadian Mounted Police are baffled by this marine mystery. We are completely out of our depth, said a spokesman. A mountie might always get his man but has more difficulty apprehending his manatee it seems. At the time of writing there is no solution in sight for The Strange Case Of The Severed Feet (cue portentous chords.) which means it will surely go down in the annals of crime. Keep checking this blog for more news, we have a feeling the story of the freed feet has a long way to run yet.

Homosexuality – biology or choice
more bullshit from the boy-scientists

Let’s Teach Children About Diversity
Faith schools, should we encourage them or ban them?

John McCain’s Flashback Campaign Democrats in America attack John McCain’s military record. Could be a mistake given their own candidate’s lack of substance.

Defending the feminine
Pandangon’s Amanda Marcotte on the sexuality of girl nerds and the nedyness of male nerds.

Al Gore Endorses barak Obama Does the former veep have a hidden agenda. After all wth the White House a shoo – in for a competent Democrat the veep candidate would step up if Obama gets a bullett in the face… 😦

Was hillary Beaten By Sexism asks a Times editorial. Only a Murdoch paper would find it necessary to ask that question.

Sexuality: homo or hetero, is it wired in our brains?