Picture source:Sorry, I couldn’t find a still of the final scene from The Young Ones TV series where the bus crashed through a picture of Cliff and went over a cliff.

All the huffing and puffing about public spending, deficits and economic collapse is starting to resemble one of those low budget horror movies where you never see the monster, just a shadow on a wall or heavy breathing or a trail of blood drops.

Many people believe there is another financial crisis, bigger than the one that caused havoc in 2008, coming straight towards us, that’s why consumer spending is down and national economies are stagnant. But the authorities all tell us not to panic, they create an illusion of growth by printing money, they keep unemployment statistics within an acceptable range by expanding the public payroll and by statistical prestidigitation but instead of the mayor of Gotham City announcing the streets are safe, Presidents Obama and Hollande, Prime Minister Cameron and Chancellor Merkel are telling us economies are recovering strongly and growth will wipe out the deficits.

As I type, political parties of left and right are butting their heads together over which of their two entirely discredited fiscal policies, Keyneseanism or Monetarism, we should use to rely on to avert a plunge over the fiscal cliff.

Considering the amount of deficit being funded by borrowing they are arguing over what size of Band-Aid should be stretched over the gaping wound when it ought to be obvious that cauterisation and stitches are required. If you mention this, youre called a right wing extremist, swivel eyed loon, neo – con nut job or even an evil fascist bastard who wants to throw old people to the dogs and deny the underprivileged their inalienable human rights.

“You cupid stunt,” angry, swivel eyed lefties will say, “Don’t you know running a nation is not like running a household. Budgets dont have to balance, that’s just a right wing misunderstanding. To reduce the deficit you have to borrow more, spend more and allow in more immigrants.”

Politicians have for so long treated tax revenue and government borrowings like Monopoly money they cannot understand why people who cast votes are suddenly talking about the need for real rather than cosmetic spending cuts. In the end however it is a numbers game. And for too long the numbers have not added up. It is sheer folly for the politicians to ignore arithmetic, the numbers game does not have a vote and is favours the well off while politicians who want to be elected know the quickest way to get votes is by talking of equality and fairness and increasing entitlements to unsustainable levels, resulting in vast deficits that can only be covered by borrowing.

In the past century (probably a little less in reality) these politicians, heavily influenced by pressure groups and populist media have grown a long list of goods and services everybody should be entitled to besides food, clean water, clothing, and shelter. The new entitlements, without which people cannot live a full and happy life, include laptop and tablet computers, internet access, mp3 players, smartphones, designer clothes and footwear and access to entertainment. Reality, cruel, heartless, uncompromising reality which only considers the numbers and never peoples’ feelings insists that it is not feasible for everybody to have all those things.

The left says we should abolish numbers and use statistics instead, after all statistics will always give politicians the answer they want. Half of the Conservatives say the same, they have been educated in the same schools and universities as the lefties and have taken on board the same lies.

So while we have the socialists, liberals and “compassionate conservatives” saying, “we must make sure nobody suffers from spending cuts, and while we’re at it we must also find money to feed and clothe the third world poor, buy them computers and smartphones and designer trainers so they do not feel marginalised,” realists are saying, “FFS who pays for all this, we borrow money from the Chinese on which we pay interest, to fund people who can contribute nothing because politicians and corporate leaders exported all the work to China.

We have Quantitative Easing which means government lends money to the banks at half a percent and the banks lend it straight back at three per cent to fund the governments next monthly deficit. The longer this goes on of course, the larger bite interest payments take out of government revenue each month.

And when you look at the numbers involved it’s no wonder politicians don’t want to talk arithmetic. The west is broke, we can’t afford a loaf of bread yet our leaders are only interested in spending cuts of a similar nature to giving up the plan to buy a Rolls Royce and getting a Lexus instead. And they trust the “scientists” who tell them if you torture data enough, 2 + 2 can be made to equal 5.

RELATED POSTS:
Financial Crisis? The Dow Has Already Fallen More Than 1000 Points From The Peak Of The Market
Grand Theft Euro

News breaking today tells us that Spain is likely to be fined under new EU rules for a “grave” breach of budget limits, the European Commission warned on Monday, despite Jose Manuel Barroso stating that he was confident the Spanish government would fulfil its commitments.

The fiscal compact was signed by EU national leaders, apart from the UK and Czech Republic gives The European Court of Justice the power to fine countries up to 0.1pc of GDP if they fail to stick to the new rules.

As Labour supporters lost in Limbo scream for more stimulus spending on government projects to get the economy back into “growth” I had to nick this cartoon: 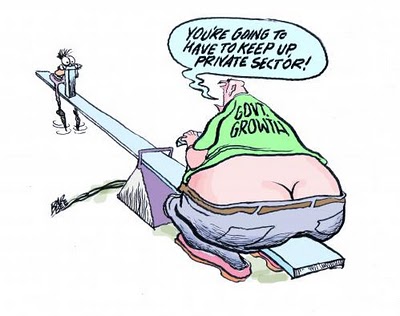 Read the accompanying article about how the growth of the pubclic sector stifles private, for profit enerprise, the sort that generates tax revenue rather than recruiting more tax eaters. Burning Our Money – How Big Is The Government