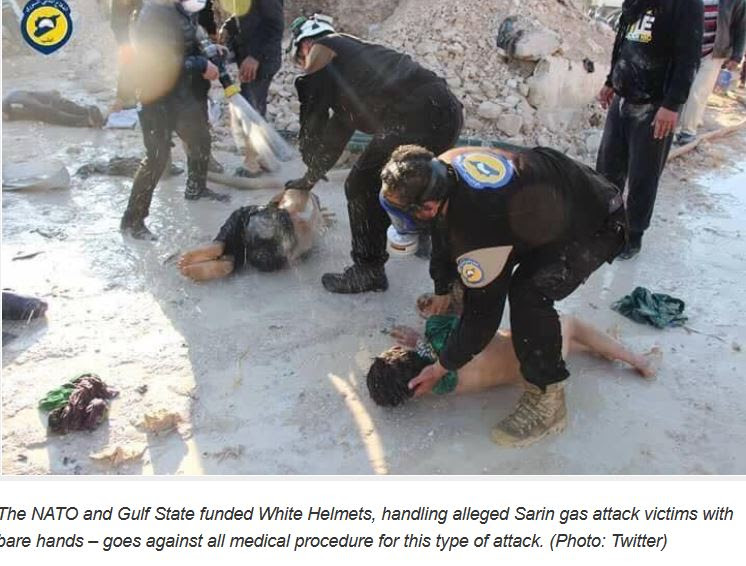 For some in the USA congresswoman Tulsi Gabbard is the stand out figure in a crowded but uninspiring field of Democrat Party politicians hoping to win the right to challenge Donald Trump for the presidency in 2020. Running as an anti-war candidate, Gabbard has expressed opposition to US military interventions in their world nations and has gone on record for casting doubt on the establishment narrative that President Assad of Syria has on several occasions ordered his troops to use chemical weapons against civilians in that country’s long civil war.

The congresswoman from Hawaii is not out on a limb in doubting the official line, while mainstream media, fearing reprisals maybe, has dutifully toed the esatblishment line that the raping, sex slave taking, journalist baking, head amputating ISIS, Al Nusra and Al Qaeda rebels are the good guys in Syria. Respected veteran journalists including John Pilger and Seymour Hersch have also pointed out that it would have been ridiculous of Assad to use illegal weapons at times when the war was going his way. However it has been revealed that the Saudis, the USA (more so under the Obama administration than Trump,), and the EU all gave material support to the rebels, while Assad, who is supported by a majority of his people, has been demonized because he has stood in the way of US / NATO regional ally and oil reservoir Saudi – Arabia and their ambitions to build an oil and gas pipeline from the gulf to the Mediterranean.

Opposing military interventions and regime change was in the US is like painting a target on your own back. Traditionally it has been The Republicans that took the role of the war party, but since Obama pledged US support for any bunch of dark skinned fanatics trying to oust and equally dark skinned dictator, rooting for foreign interventions has become part of the Democrat platform too. But not for Tulsi Gabbard whose published criticisms of American military meddling in the domestic politics of smaller nations includes a lengthy piece on chemical attacks in Syria.

In spite of the outraged reaction from both ends of the US political spectrum,, she does have a point. In February 2018, commenting on the publication of an OPCW (Organisation for the Prevention of Chemical Weapons report on one poison gas incident which stated inspectors found no evidence that the Assad regime was involved, I wrote:

“Experienced chemical weapons experts and independent U.N. investigators such as Hans Blix, Scott Ritter, Gareth Porter and Theodore Postol have all cast doubt on “official” American narratives claiming that President Assad employing Sarin.
Now the US government’s military boss has said on the record that there was no evidence to support this conclusion. In so doing, Mattis tacitly impugned the interventionists who were responsible for pushing the “Assad is guilty” narrative twice without sufficient supporting evidence, in order to justify escalation of US / NATO involvement in the conflict.”

On another chemical weapon event American scientist Theodore A Postol conducted his own investigation because he found the official report unbeliveable. His daming report, sent to Washington, included, along with much more evidence deconstructing the official version of events, this paragraph:

“When the OPCW document [the leaked report from a dissenting OPCW scientist claiming that the chemical weapons attack was staged] indicating staging of the chlorine cylinder attacks in the alleged attacks in Douma on April 7, 2018 was released, I was traveling and in Washington with little time to look more deeply into the matter. I have finally had a chance to evaluate sections of the Douma report S/1731/2019 more comprehensively, including critical observed data and calculations included in the report. The attached PDF file contains my findings in detail.

My review of the conclusions in the UN OPCW Fact-Finding Mission Report (FFM) S/1731/2019 shows that the science-based analysis used in the report and the observed data collected by the FFM bear no relationship to each other.”

So Tulsi Gabbard is in good company when she questions the official narrative on Assad;s chemical weapons atrocities.

Gabbard became the most-googled candidate immediately after the second Democratic Party presidential primary debate, but her success in routing the establishment candidates triggered a renewed surge of personal attacks, character assassination and smears from left leaning mainstream media against her anti-war agenda. Gabbard has been branded a ‘Russian’ spoiler for whichever candidate is eventually picked, Putin’s puppet, an anti American extremist and an apologist for the brutal regime of Syrian President Bashar Assad.

The attacks were used by the Obama administration to justify missile strikes against the country’s legitimate government and the continued and illegal US military presence in Syria.

While Western governments were quick (too quick in fact,) to lay the blame for Syrian chemical weapons events on the government forces Damascus and Moscow have insisted the attacks mentioned by Gabbard and Higgins were false-flag operations by Al-Qaeda-affiliated militants. One would not normally take the word of either at face value but in this case their denials are backed by the independent OPCW investigators.

Particularly infamous was the one in Douma on April 7, 2018, in which the Oscar-winning ‘White Helmets’ doused unsuspecting children with cold water on camera, so as to fake the treatment of the alleged “victims.” They might not have expected for witnesses to later come forward and speak on the record at the Hague, denouncing the whole affair as staged, a view confirmed by the fact that video posted online showed aid workers in ordinary street clothes working on alleged victims of Sarin gas, a material for which full haz – mat suits are required.

A final point in conclusion, it is ironic that Bellingcat has seen fit to spend some of the US taxpayer money, which it receives through one of its sponsors, the National Endowment for Democracy – on meddling in American election processes ahead of the 2020 presidential campaign. Most of us innocen Brits though meddling in American elections was a task reserved for Russians.