A disgruntled graduate is suing her university after claiming that two years of study at £9000 per year plus attendant living expenses has left her with nothing more than a “Mickey Mouse” degree that has proved useless in advancing her career. Despite graduating with a first. Pok Wong is suing Anglia Ruskin University for more than £60,000.

She alleges the institution’s claims regarding a “quality education and prospect of employment after graduation” were fraudulent, she told The Sunday Telegraph. The case echoes that of Oxford University Faiz Siddiqui, who tried to sue the institution for £1m after it did not give him a first-class degree.

Mr Siddiqui’s case was that “negligently inadequate teaching” was partly to blame for his 2:1 degree, which he claimed prevented him from getting into a top US law school and becomeing an international commercial lawyer.

Lawyers believe the case could influence universities present their courses in marketing materials, as students who spend around £9,000 a year for their education demand value for money and see themselves as customer rather than pupils. Ms Wong said she moved from Hong Kong to Britain to study at the Lord Ashcroft International Business School in Cambridge after being influenced by the claims in the prospectus.

Now the 29-year-old alleged in a complaint lodged with the courts that the university failed to deliver on its promises. She also accused it of a breach of contract and fraudulent misrepresentation, listing poor discipline among staff and students being told to “self-study” among her complaints.

The degree, in International Business Strategy “does not play a role to help secure a rewarding job with prospects”, she claimed, adding that the prospectus had promised the course would leave graduates “well equipped” for jobs in the business world, following two years of “high quality teaching”. 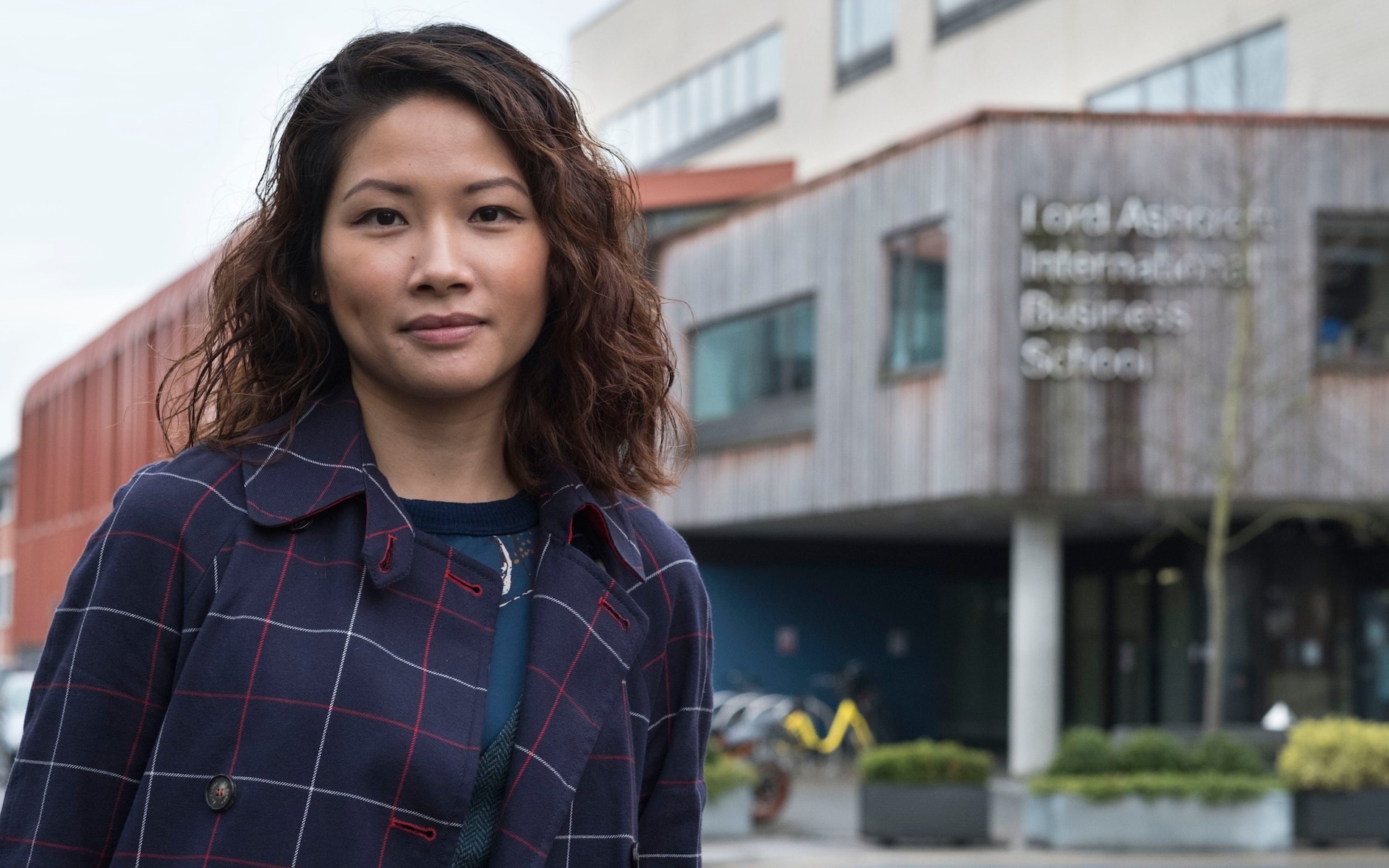 She also alleged she was “locked” in a room for trying to speak out about the quality of her course during her graduation ceremony, which she has branded as false imprisonment.

Ms Wong hopes the case will encourage other students to demand value for money and seek compensation if universities do not deliver.

“The prospectus convinced me that the university is really impressive,” she told The Sunday Telegraph. “But, as soon as I started in 2011, I realised there were failings. Although I graduated with a first class degree in 2013, it is a Mickey Mouse degree. I hope that bringing this case will set a precedent so that students can get value for money, and if they don’t they get compensated. Anglia Ruskin talked a good talk but then they didn’t deliver.”

She has justified the money she is demanding as a refund of her tuition fees for the international business strategy course and the living costs for her time there.

The University is ranked below 300 in the Time Higher Education World University Rankings for 2018.

A spokesperson for Anglia Ruskin University told The Independent: “We are well aware of the claims made by this former student and we are robustly defending the current litigation.

The case echoes that of Oxford University Faiz Siddiqui, who tried to sue the institution for £1m after it did not give him a first-class degree. Mr Siddiqui claimed that “negligently inadequate teaching” was partly to blame for his 2:1 degree, which he said prevented him from getting into a top US law school, and, in turn, meant he could not become an international commercial lawyer. It was inevitable, given the way higher education has been turned into a branch of industry or commerce, with profit as the main motivation, that failure by universities to deliver on claims of enhanced career and earnings potential would result in litigation.

My daughter may even have a case, she was sold the idea of studying for a degree in the history of art, design and film. In the years since her graduation I have spoken to her about art history, a topic on which I am quite well read, and found that aside from hardly touching on film, the course had left her almost totally ignorant of the influence of the Italian renaissance Neapolitan, Florentine and Venitian schools, the Dutch masters and even the more recent pre – Raphaelites and impressionists. In art they focus had been on twentieth century abstract expressionism and surrealism, but most of her course had covered 1950s and 60s pop art design developments.

Career wise it was a total waste of money and has not even equiiped her to have many interesting converstations, what is there to say about plastic chairs.

Poor white pupils put off school by multicultural timetable
Education, should it be about learning to read, write, spell and calculate? Or should it be about feminism, gay rights, black history and ‘gender awareness’ whatever that is? For many years we have had multiculturalism and politically correct thinking rammed doiwn pupils throats but noe a study by a local education department suggests this obsession with politicallly corret diversity is responsible for the failure of white working class pupils.

Black characters put parents off books, new Children’s Laureate says
It seems very strange to me the new children’ laureate is a person descended from the dark skinned races and the first thing she does in her new role is make children’s literature a race issue.Isn’t that erm, you know … a tad racist.
Marjorie Blackman (no pun there, that’s her name)also said that when …

Education Is Out, Indoctrination Is In.
This is about a teacher in america who has quit the profession in disgust at the way left wing indoctrination is replacing neutral education in schools. Many British teachers have said similar things and Daily stirrer occasional contributor Sally Redfern quit the teaching profession for the same reason.

Captive Minds And Cowardly Intellectuals
The pose intellectuals and academics like to strike is that of detatched, independent minded individuals who reject materialism and devote their lives to the expansion of knowledge and understanding and a quest for truth.In reality…

Some reality on employment prospects for young graduates.
‘Work experience’ and unpaid internships have created a moneyless vacuum between education and pa employiment that only the rich are able to fill. For others a degree only means a masive debt without any improvement in earning prospects

Trendy left wing education policies accused of inhibiting ambition in school pupils
Shocking new revelations about the state of the education system show that trendy education policiesz are not only dumbing puypils down, they are trampling on ambition and aspiration as well.

Left elite’s determination to dum down now bars bright pupils from University
Latest plans put forward by elitist lefties to make university access ‘more equal’ can only lead to higher education being dumbed down as skin colour, sexuality or being from a single parent family will count for more than intelligence.

The Failure Of Education, The Subversion Of BureaucracyGovernment plans to toughen up the penalties that can be imposed on parents guilty of ‘bad parenting’ and tolerating truancy do not signal determination to deal with the problems in the education system but are an admission that progressive and ideological ideas in education havre failed generations of bored and disengaged pupils.

Back To basics Policy To Save Education?
Coalition Ministers revealed their proposals for a back-to-basics curriculum for state schools, with the focus shifting away from soft subjects and abstract studies back to basic arithmetic, times-tables, spelling, grammar, reading and history. Predictably Teachers’ Union leaders warned it would lead to an unexciting “uniform education” for children. Maybe so, butonce pupils are equipped with those basics they can go on to study whatever they finmd interesting. There is little point talking about Shakespeare to kids who can’t …

We told you so, University Degrees Are Worthless
The Daily Stirrer has been saying it for years, now a leading British businessman has come out and said it too. University Degrees are worthless.Self-made multimillionaire Simon Dolan left school at the age of 16 and went on to form a business empire which now turns over close to £100m a year, putting him 703rd on the Sunday Times Rich List. Mr. Dolan also criticised the designer degree business that is responsible for creating such oddball courses as waste management with dance. He described these and even the less insane courses like …