Hope rose of a vaccine for  COVID-19 becoming available in the near future when Scientists at the Chinese Academy of Medical Sciences found that monkeys infected with the coronavirus variant developed immunity to the disease after recovering from it.

Unfortunately the hopes were quicky dashed when it emerged that after complting their tests to researchers ate the four monkeys for lunch. 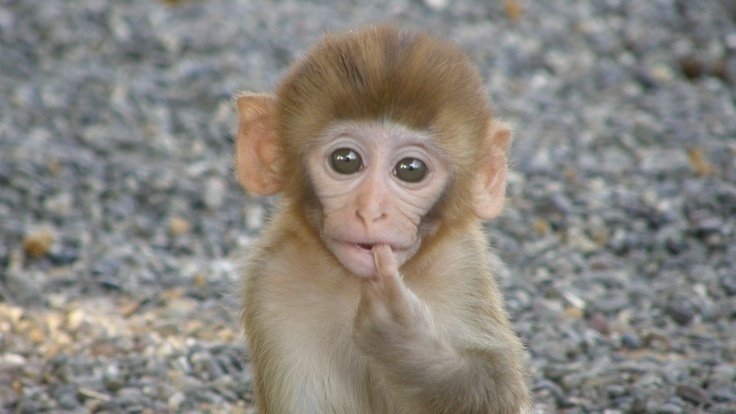 A young rhesus monkey wonders why that Chinese research scientist is wearing a chefs hat and sharpening a butcher’s cleaver (picture: change.org)

Alcohol was thought to have been first brewed by Neolithic farmers around 9,000 years ago when northern Chinese villagers made the happy discovery that fruit and honey could be fermented into an intoxicating liquor.

But new evidence suggests our ancestors had become accustomed to drinking nearly 10 million years before. So ignore those hand wringing, moanie – moanie fuddy – duddies and their ‘three thimblefuls a week makes you an alcoholic’ shit. If it wasn’t for booze we’d still be swinging around in trees. Booze culture is evolutionary

Anthropologists are now turning to the view that when primates left the trees and began walking on two feet they also started scooping up mushy, fermented fruit which was lying on the ground. And over time their bodies learned to process the ethanol present and their minds learned the meaning of “It’s party time.”.

A team at Santa Fe College in the US studied the ADH4 gene  which enables us to produce an enzyme to break down alcohol in the body. Do not make the mistake of thinking this is linked to ADHD, ADH4 actually stands for Alcohol Deficiency Hopelessness 4 gene which is not present in miserable fuckers who never have a drink. Any primates unable to digest the fermented fruits would have died before passing on their genes, but those who could would have passed the drinking gene on to their offspring.

It was hypothesised that the booze metabolising gene did not appear until alcohol was first produced by early farmers in Asia. But researchers were amazed to observe it 10 million years earlier, at the end of the Miocene epoch.

The findings could explain why tree-dwelling orang-utans still cannot metabolize alcohol while humans, chimps and gorillas all of which are more familiar with the ground through hitting it face first while rat – arsed, can. The lesson we learn fom this is never go for a drink with an Orang Outan, they’s either get aggressive and beat the crap out of you because they are ten times stronger than an adult human male, or they’ll throw up on you, pass out and you will have to carry them home because no cabbie will take them.

Other that that, and bearing in mind another recent study showed that alcohol related illness is overstated, far more cases in the liver disease ‘pandemic’ are due to doctors overprescribing paracetamol than has been acknowledged preciously, your Boggart Bloggers advise you to get ready for a great Christmas. BRING IT ON.

Read more on this Story:

Today’s blog is an all too rare contribution by our beloved proprietor Jenny Greenteeth.

I seeing Justin Beeby Booby Baby is in trouble with his fannies Mummies and Daddies again for upgetting to the kinds of tricks Ozzy Osbourne built a career on.

It will not work for everybodies, Beeby Booby Baby is more bubble gum thn Black Sabbath. And he looks like the secret love child of Anthea Turner and Richard Madeley. Young Bieber is not rock and roll material.

So what does he stink he is uppit to, mummies and daddies not liking throw money away for their little tadpoles to sit in Theatre while Beeby Booby hav a wank for two hours? (Jenny promises you Justin, it will be quicker when you ballses have dropped properly. Jenny know about these things, I am mother to a millions of tadpoles.)

But is his antickery going to trash career. Will little Bieber be the next Lindsay Lohan? Well we all know she hav pubic hairies at least. Public pubic hairies.

Personally I blames the monkey. Whare is his handlers thinking of letting the boy Beeby hav a monkey. We all know that when squeaky clean, squeaky voiced teeny bopper idols get a monkey they are on a slippery slope. And I think we all know what a nasty, egocentric, delusional bog it lands them in.

Oh yes, you know who I’m talking about my little tadpoles.

MORE FROM THE GREENTEETH STABLE

News has come to us that South Tyneside council have been harrassing a blogger and twitterer named Mr. Monkey for saying less than flattering things about them.

Mr. Monkey has apparently been charing with the world his view that certain officials of the council are lazy, incompetent, self serving shits. Seems reasonable to us.

Not only do South Tyneside get an F for their support of civil rights such as free speech, they get a Z for geography.

It is after all Hartlepool, some miles to the south east where the local authorities have a tradition of hanging monkeys.