THE DUP’S Arlene Foster has backed Boris Johnson’s claim that the EU is to blame for growing likelihood of a no deal Brexit – branding their approach as “belligerent”.

The DUP leader Arlene Foster echoed Boris Johnson’s criticism of how Brussels and Dublin had treated the UK during Brexit talks. In a fierce attack on EU leadership, Mrs Foster savaged the EU negotiators as “belligerent” – claiming they were to blame for the Brexit deadlock. She went onto say that the EU’s aim was not to agree a Brexit deal, but instead “to break up the United Kingdom”.

READ ALL at Daily Express

authored by Tom Luongo for Gold, Goats and Guns

Deal or No-Deal, when it comes to Brexit, the euro is toast. Markets, however, believe the fantasy of its survival. As we approach the end of July the euro clings to support at $1.11, mere pips away from a technical breakdown.

That breakdown will trigger a wave of asset liquidation and another round of negative headlines emanating from troubled German banks.

With 10 Downing St. now saying No-Deal is acceptable, the hard line negotiating tactics of the European Union have hit a rocky shore.

Because it looks like Boris Johnson is ready to give as good as he gets.

I’ve been saying this for a long time. The EU is not a tough nut to crack. They have no leverage in these Brexit negotiations.

Ramsgate Ferry Port – not many ships or lorries around, maybe its only used by ghost companies ( Picture: http://s0.geograph.org.uk/geophotos/ )

One of the companies contracted by the government’s Ministry of Brexit Panic to run ferries in the event of a no-deal Brexit does not currently own any ships, has never operated a ferry service or shipping line and is not planning to do so until close to the UK’s scheduled departure date from the European Union, it has emerged.

Concerns have been raised about Seaborne Freight, which despite it’s not being in a position to provide any service was awarded a £13.8m contract to operate freight ferries from Ramsgate to the Belgian port of Ostend if the UK leaves the EU without a deal, after a councillor for the Kent town queried whether it would be possible to set up the new service by the scheduled Brexit date.

There are grounds for looking closely into this company and who benefits from its profits. It would not surprise us if Prime Minister Theresa May and Chancellor Phil (spreadsheet) Hammond are among the main shareholders. Amid all the Project Fear panic about ‘no deal’ nobody is asking why we will need more ships. There will not be any significant increase in cross channel trade after Brexit, in fact the Remainers would like us to believe trade will cease completely.

The seaborne contract is one of three agreements worth a total of £107.7m signed by the government without a tendering process (how dodgy is that?) to help ease “severe congestion” at Dover by securing extra lorry capacity. 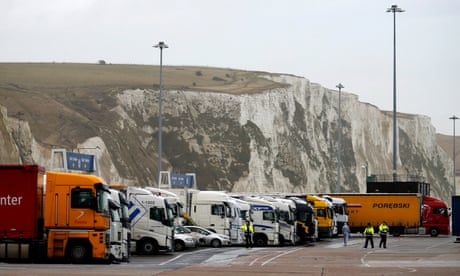 Seaborne has published plans to operate freight ferries from Ramsgate from late March, beginning with two ships and increasing to four by the end of the summer. Without any ships this is oing to be quite difficult as some people have noted.

Paul Messenger, a Conservative county councillor for Ramsgate, questioned whether the government had run proper checks on the firm’s financial stability, management experience, and fitness to fulfill the contract, telling the BBC: “It has no ships and no trading history so how can due diligence be done? Why choose a company that never moved a single truck in their entire history and give them £14m? I don’t understand the logic of that.”

Seaborne was established two years ago and has been in negotiations about running freight ferries between Ramsgate and Ostend, but no services are currently running. Narrow berths in the port mean there are few suitable commercial vessels available.

There are two options here. Either the whole thing is a typical civil service fuck up or somebody has trousered £13.8 million of taxpayers money without ever intending to do anything to earn it.