We don’t know what to make of this report, it may be a wind up or an attempt to distract from the COVID – 19 hoax, or there may be something in it … but we know it makes a welcome break from pandemic and Black Lives Matter stories.

Authored by Elias Marat via TheMindUnleashed.com,

As secretive unit operating within the U.S. Department of Defense that is charged with investigating unidentified flying objects (UFOs) will make some of its findings public after it was revealed that the Pentagon has been recently briefed about “off-world vehicles not made on this earth.” 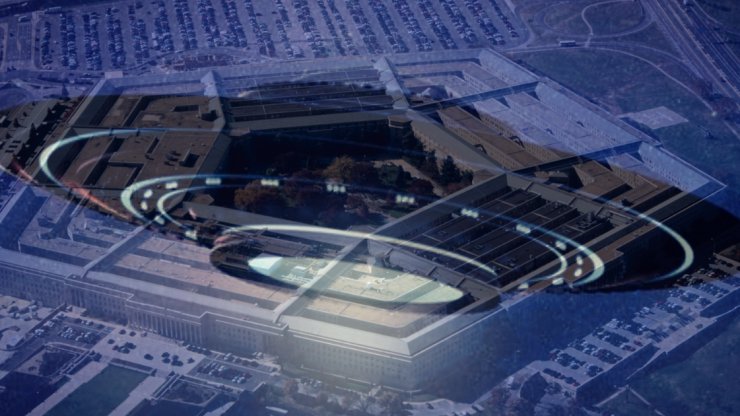 The once-covert UFO unit, which operates within the U.S. Navy’s Office of Naval Intelligence, will soon begin giving regular biannual updates on its research to the U.S. Senate’s Intelligence Committee, reports The New York Times.

The Unidentified Aerial Phenomenon Task Force was formed in 2019 for the purpose of studying strange and inexplicable encounters between U.S. military pilots and unidentified aerial vehicles or UFOs in a bid “to standardize collection and reporting” of the various sightings.

The program is the successor to the Advanced Aerospace Threat Identification Program, which also investigated UFOs but was dissolved in 2017 due to a lapse of funding. However, the team working on that program continued its work alongside the intelligence community even after it was officially disbanded.

Luis Elizondo, a former military intelligence official who headed the Pentagon program, resigned in October 2017 after a decade with the program. Elizondo, along with a group of former government scientists and officials, remain convinced that objects of unkown origin have crashed on Earth and that these apparently extraterrestrial materials have been the focus of research.

“It no longer has to hide in the shadows,” Elizondo told the Times. “It will have a new transparency.”

Former Senate majority leader and retired Sen. Harry Reid (D-NV), who led the push to fund the earlier UFO program, also believes that the studies should see the light of day.

“After looking into this, I came to the conclusion that there were reports — some were substantive, some not so substantive — that there were actual materials that the government and the private sector had in their possession,” Reid said.

So far, none of the alleged crash artifacts have been subject to public scrutiny or verification by independent researchers. However, some of the retrieved objects such as strange metallic debris were identified as being manmade – raising the possibility that they could be related to the military of U.S. rivals such as China or Russia.

However, astrophysicist Eric Davis – who served as an advisor for the Pentagon program since 2007 – said that he had briefed the Pentagon in March about material retrieved from “off-world vehicles not made on this earth.”

You gotta laugh. In a bitter humourless way of course because interest we have to pay on the money our governments have been borrowing to fund this kind of politically correct crap is bleeding us dry.

from The Washington Times
(reproduced under Creative Commons licence)

While The Emperor Obama was busy destroying democracy this weekend by announcing that he will not need the approval of democratically elected representatives to close down coal fired power stations because he has granted himself the kind of executive powers enjoyed by Caligula and Nero, others have been hard at work exposing the climate change scare for the scam it was.

Ten years ago, the Pentagon (?) paid for a climate study that put forth many scary scenarios.

Consultants told the military (?) that, by now, California would be flooded by inland seas, The Hague and Amsterdam would be unlivable, the architectural treasure of Venice wouls be lost, polar ice would be mostly gone in summer, and global temperatures would rise at an accelerated rate as high as 0.5 degrees a year.

None of that has happened.

Yet the 2003 report, An Abrupt Climate Change Scenario and Its Implications for United States National Security, is credited with kick-starting the movement that, to this day and perhaps with more vigor than ever, links climate change to national security.

The release of this report is what likely sparked the modern era of security interest in climate affairs, said Jeff Kueter, president of the George C. Marshall Institute, a nonprofit that examines scientific issues that affect public policy.

It was widely publicized and very much a tool of the political battles over climate raging at the time, said Mr. Kueter, who sees as tenuous a link between U.S. security and climate change.

Doug Randall, who co-authored the Pentagon report, said, Even Im surprised at how often its referred to.

I think it did have an impact, for sure, in getting people talking and seeing the connection, which at that time was harder for some people than it is today, said Mr. Randall, who heads the consulting firm Monitor 360.

Some critics say such alarmist reports are causing the Pentagon to shift money that could be used for weapons and readiness. It is making big investments in biofuels, for example, and is working climate change into high-level strategic planning.

There is no exact budget line for climate change. The Government Accountability Office in 2011 documented a big increase in federal spending, from $4.6 billion in 2003 to nearly $9 billion in 2010.

Sen. James M. Inhofe of Oklahoma, the top Republican on the Senate Committee on Armed Services, has been the chief congressional critic of the Pentagons financial commitment to climate change. He said biofuel projects should be left to the Energy Department.

The presidents misguided priorities with our national security can be seen in the $1 trillion defense cuts he has put into motion since taking office and then using the limited defense budget to support his green agenda, Mr. Inhofe said in a statement to The Washington Times. His green spending in the defense budget is based on the belief that climate change is the new weapon of mass destruction. In the meantime the president has loosened sanctions on Iran, [which] has maintained their resources to develop and launch a nuclear weapon  the real weapon of mass destruction.

The 2003 report was produced by a consulting firm, then called the Global Business Network, for the Pentagons office of net assessment. It is a driving force to allocate money to counter global threats  in this case, climate change.

So the question we should be asking is WTF has that cash swallowing area of government, the military do do with climate change. are the Russians, Chinese and Iranians throwing water filled condoms at us or something?

For those who don’t know, Kickstarter is an American crowdsourcing website where people can solicit ideas for business products, raise funding for new ventures invite “the crowd” to collaborate in design projects. Take a look at Kickstarter and you will see some bonkers projects and ideas dafter than any on Dragons Den alongside requests for help with other crowdsourced things.

The one I received a link to from a friend who runs a business in the USA is out on its own for sheer insanity however. DARPA (Defense Advanced Research Projects), the Pentagon division tasked with developing new weapons and military technologies, has decided to crowdsource ideas for America’s newest tank. Well, not strictly a tank: an “armoured amphibious infantry fighting vehicle designed to carry troops into combat”. Or a tankish sort of thing to you and me. Now we at Boggart Blog thought the UK Defence Procurement System was chaotic and hoplessly inefficient, it having saddled us with helicopters that can’t fly in bad weather, surveillance aircraft that were obsolete long before they were built and Trident submaries designed to counter a threat that stopped threatening twenty years ago. But the Americans have beaten us again.

The “armoured, amphibious fighting vehicle that looks like a tank, sounds like a tank and smells like a tank but is not a tank will be built for real in the DARPA labs, and will be given the designation “FANG” (Fast, Adaptable, Next-Generation Ground Vehicle)which is almost as good as the name I suggested giving The Help Desk on one of my Information technology projects, the Fast Action Response Team. And the winners will get (puts little finger to corner of mouth) ONE MILLION DOLLARS.

Before you reach for your colouring pencils, ruler, washing up liquid bottles, wire coat hanger and stick back plastic, it’s worth bearing in mind that only US citizens and US based entities can enter.

Here are a few examples of the kind of “armoured amphibious fighting vehicles” the crowd might come up with: