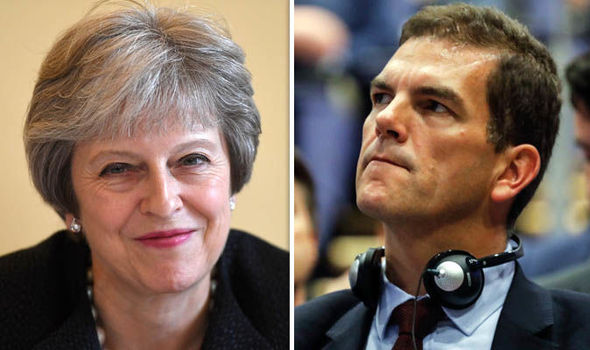 Teresa May and Olly Roberts

Oliver ‘Olly’ Robbins, the top bureaucrat to whom Theresa May has delegated most of her Prime Ministerial negotiating powers on Brexit, is being head – hunted by a number of major investment banking corporation, for a role in their organisations after the EU negotiations are complete.

The unelected civil servant has openlt expressed admiration for the tyrannous bureaucracies of the Soviet Union, noting that the autocratic Communist leaders transformed Russia “from a backward peasant autocracy, despised by the West, into a technological giant at whom the world cowered in fear for half a century”. Obviously Olly hasn’t read any histories of the Soviet era.

Such sentiments have helped to fuel a widespread belief among Leave-supporting politicians that Robbins, like all senior civil servants a rabid Remainer, would rather Britain would not leave the European Union at all and become a vassal state of the EUSSR. He has been the driving force pushing the Prime Minister towards a soft ‘Brexit In Name Only’ in which the UK will remain subject to the EU’s institutions and regulations in many respects and continue to pay £billions into the EU while not enjoying the few benefits of membership.

However, his theoretically neutral position has now been further compromised by the news that he is being headhunted by investment bankers willing to pay him a million pounds a year to advise them on strategy post Brexit. There is a clear conflict of interest and he should be fired from his civil service post.

Many of the biggest banking corporations, including Goldman Sachs, J P Morgan, Morgan Stanley, and Citigroup poured big money into the Remain campaign, and there are concerns that the prospect of a salary many times larger than Robbins could expect to earn even at the very top of the Civil Service could impact his decision-making in the EU negotiations.

“Olly has his exit strategy,” a source remarked to the Sunday Times. “Every man and his dog in the City wants him.”

Europe disappearing up it own hole (image source)

Europe won the Cold War and looked set to become the global superpower. So where did it all go wrong?

Not long after the Berlin Wall fell a quarter of a century ago, the Soviet Union collapsed, the United States squandered its peace dividend in an attempt to maintain global dominance, and Europe quietly became more prosperous, more integrated, and more of a player in international affairs. Between 1989 and 2014, the European Union (EU) practically doubled its membership and catapulted into third place in population behind China and India. It currently boasts the world’s largest economy and also heads the list of global trading powers. In 2012, the EU won the Nobel Peace Prize for transforming Europe “from a continent of war to a continent of peace.

In the competition for “world’s true superpower, China loses points for still having so many impoverished peasants in its rural hinterlands and a corrupt, illiberal bureaucracy in its cities; the United States, for its crumbling infrastructure and a hypertrophied military-industrial complex that threatens to bankrupt the economy. As the only equitably prosperous, politically sound, and rule-of-law-respecting superpower, Europe comes out on top, even if — or perhaps because — it doesn’t have the military muscle to play global policeman.

And yet, for all this success, the European project is currently teetering on the edge of failure. Growth is anemic at best and socio-economic inequality is on the rise. The countries of Eastern and Central Europe, even relatively successful Poland, have failed to bridge the income gap with the richer half of the continent. And the highly indebted periphery is in revolt.

Cameron’s EU Deal Worthless. It Can Be Vetoed In European Parliament?
The current situation in the EU polling as David Cameron desperately tries today to win concessions that will make staying in the EU acceptable to supporters of the Conservative Party he leads is that Britain has long received a “poor man’s offering” from what she views as a German and French-dominated bloc.

The Pain In Spain – Will This Be The Next country To Rebel Against EU Tyranny
The EU war on democracy – can Greece defend itself?
If You Believe Mainstream Media You Probably Think Russia Is On Its Knees – WRONG!
Europe on the fast track to fascism
Europe: democracy threatened by integration
Will EU leaders sacrifice future for ideology
Europe sinks into stagnation and bureaucratic dictatorship