Under hate speech laws we are not supposed to mention the ethnic origin of the convicted men, but you get the message from this picture (Source: Yorkshire Post)

We seem to have been reporting the activities of gangs of Muslim and Pakistani men who  have groomed and sexually abused under age and often vulnerrable girls under the noses of police and local authority care services for ever. Surprisingly it is only four years since the story broke.

At that time we were writing that the problem was deeply embedded in the social structure of immigrant communities, we knew the first prosecutions were only the tip of the iceberg, and as predicted the cases keep coming. It is indicative of the incompatibility of  cultures between Europe and the remote parts of the Indian sub continent.

In the latest case twenty men have been found guilty of being part of a grooming gang that raped and abused girls as young as 11 in Huddersfield. The Yorkshire Post reports the men were convicted of more than 120 offences against 15 girls.

Victims were plied with drink and drugs, a familar pattern of behaviour in all these cases, and then “used and abused at will” in a seven-year “campaign of rape and abuse” between 2004 and 2011.

At Leeds Crown Court, the ringleader, Amere Singh Dhaliwal, 35, was jailed for life with a minimum of 18 years.   Other members of the gang were jailed for between five and 18 years but the court heard many perpetrators have never been identified. Details of the men’s convictions and sentences can only now be published after reporting restrictions on a series of trials were partially lifted.

During the three trials, jurors heard how the men – who are all British Asians mainly of Pakistani heritage – preyed on young, vulnerable girls, one of whom was described as having the mental age of a seven-year-old.

The men, all from Yorkshire, went by nicknames including “Dracula” – which Nahman Mohammed was known as. Mohammed Imran Ibrar was known as “Bully”, Abdul Rehman was nicknamed “Beastie”, while Nasarat Hussain was known as “Nurse”.

Jailing 16 of the men earlier this year, Judge Geoffrey Marson QC said: “The way you treated these girls defies understanding; this abuse was vile and wicked.

We’ve always said politicians live in a bubble, completely divorced from reality and therefor from the lives of the people they represent. Harsh, some said, but it turns out we were not harsh enough because there is now evidence coming in the the elitists parachuted into constituencies to hold safe seats for the major parties are not simply out of touch with the reality of ordinary lives, they don’t even know where their constituencies are.

from The Daily Telegraph

Ingleton is a village of impressive natural beauty, boasting limestone caves, flowing waterfalls and literary links to master sleuth Sherlock Holmes. Unfortunately for one Labour MP, that it isnt the Ingleton she represents in Parliament.

Helen Goodman, Shadow Media Minister, has acted for the village of Ingleton, County Durham, for almost a decade. But in a speech yesterday she confused her constituency village with one by the same name 70 miles away in North Yorkshire.

The Oxford educated MP is said to have babbled on about the villages connection to Sir Arthur Conan Doyle as well as its beautiful limestone caves and waterfalls while opening a classic car show and community fair.

In reality, the Ingleton in which she spoke to 500 baffled constituents has a disused mine and little more than two rows of houses either side of a main road, complete with a school, church and village pub.

The 56-year-old has been accused of a disgraceful lack of knowledge about her constituency of Bishop Auckland, which she has represented since 2005, and of plagiarising the speech from the wrong Wikipedia page for Ingleton.

Here are images of just a few of the interesting things around Ingleton Yorks. 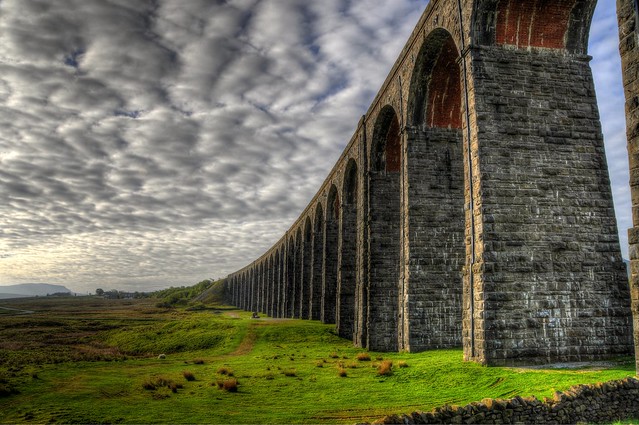 Ribblehead Viaduct on the famous Settle to Carlisle line.

Ingleton, County Durham on the other hand has some truly amazing public benches:

A tad unfair perhaps but if this MP had ever actually actually toured her constituency with her eyes open instead of constantly asking her agent “how much longer do we have to hang around this dump before I can get back to the members bar in Westminster?” she might have noticed a distinct lack of waterfalls, caves, viaducts and Sherlock Holmes impersonators.

In the interests of balance however, we hear the Tory boy who recently won the by election in Newark, Nottinghamshire, has been approaching people in Newark New Jersey and introducing himself as their new Member of Parliament.

We in the north have always known southerers were a bit on the soft side.

Additional proof, if any were needed, came in one of the news bulletins about snow disruption. In rural parts Surrey people who own 4 x4s have been charching owners of ordinary cars £10 for help getting out of snow.

Now if that had been in Lancashire, Yorkshire or places even further north the fee is £25 … and you can say goodbye to your kneecaps if you try to get out of paying.