The corruption scandal surrounding France’s former future president Francois Fillon grows, his public support is in free fall according to latest opinion polls released on Wednesday. After brexit and Trump we are all aware that opinion polls are not reliable indicators of election outcomes, but as things stand the conservative presidential candidate would no longer even make the second round of this spring’s presidential election in France, second place behind Marine Le Pen being occupied by former minister in Francois Hollande’s socialist government, Emmanuel Macron, head of the political movement En Marche!
This can only increase the pressure on Fillon to stand down, as the scandal over his wife and children’s publicly funded “fae work” engulfes his campaign.

The poll by Elabe showed rising support for anti – establishment, anti – EU National Front leader Marine Le Pen, but notably it showed centre left candidate Macron most likely to win the presidency if a stitch up between Socialists and Conservatives can be cobbled together to block Le Pen’s bid for power. Should that happen we can expect a summer of rioting and civil unrest in France, probable spreading to neighbouring EU member states as citizens anger with the ruling elites boils over.

Fillion was himself something of a stitch up having been presented to voters as a moderate conservative and social reformer. The way he was described in a leaked Hillary Clinton campaign email paints a different picture, showing him to be the establishment’s man to the core and therefore the French candidate the Clinton Soros crime syndicate should favour: 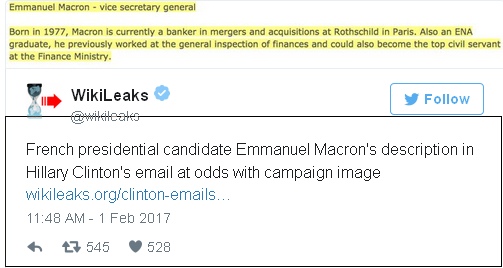 As the past year has shown however, when it comes to non-traditional candidates or outcomes, polls are notoriously wrong, so it is possible that Le Pen’s chances in the second round are underestimated.

The poll by Elabe for Les Echos newspaper was conducted on Jan. 30 and 31, a few days after a newspaper report that said Fillon’s wife was paid taxpayers’ money for fake work.

That said, as WikiLeaks pointed out this morning, the description of the unexpected presidential frontrunner – a former Rothschild M&A banker – in Hillary Clinton’s email “is at odds with campaign image.”

As we reported yesterday, French police have searched Fillon’s office and gathered evidence to support the allegations and party leaders are considering a “Plan B” campaign without him.

Corruption: Paraphrasing Johnny Rotten, ‘Never trust a fahkin’ liberal’
As the ‘liberal supporters of Barack Obama’s hapless presidency and more recently the US Democratic Party’s 2016 failed candidate ‘Crooked Hillary’ Clinton whip themselves into an ever greater frenzy over the hugely entertaining antic of President Trump, An editorial at Investors Business Daily may end up being considered by historians as defining exactly why the Obama administration failed so catastrophically …