Swedish TV4 revealed yesterday that the homepage of the Gothenburg mosque – a mosque built with Saudi Arabian money – links to an international guide for proper behavior if one wishes to convert to Islam.

The New Muslim guide says that a Muslim woman must have her husband’s permission to leave the home, regardless if it is for personal or for other reasons. Furthermore, the guide claims that it’s a sin if a Muslim woman ever denies him sex. The only exceptions to the rule are if the woman is sick or is menstruating.

Sarah Delshad, the founder of the organization Feminist Muslims, says that she’s saddened that such an ultra-orthodox conservative form of Islam attempts to speak for all the Muslims today. Sarah does not wear hijab and she is a “progressive” Muslim.

Another person who TV4 met who reacted negatively to Gothenburg mosque’s statement Magnus Ranstorp, a researcher on terrorism.

“It is remarkable that the mosque link to this New Muslim Guide, a guide which has these reprehensible views,” Ranstorp said.

TV4 called the spokesperson for the Gothenburg Mosque, Mohammed El Alti, to confront him about the views espoused on their homepage.

I caught a few minutes of a BBC2 documentary last night while looking for the news headlines before going to bed. It was about Iraq’s secret sex trade and what I was watching was Iraqi clerics talking about how Sharia Law justifies sex with children. One guy told how for the equivalent of £200 he arranged a “pleasure marriage” (a temporary marriage,) between a thirtyish man and a 9 year old girl.

Anyone thinking of telling me this is “just a conspiracy theory” should watch the program (on BBC iplayer via the link) before posting ridiculous comments in defence of the indefensible.
Lefties in Sweden, Germany, France and UK tell us we should welcome this culture of child abuse, but do we want to live in societies in which the local religion (and de fact law) permits parents to prostitute their children?

The documentary narrator did say that technically these “pleasure marriages” are illegal, but that was the law as imposed by Saddam Hussein’s regime and, supported by neo – liberal politicians in Europe and North America, he was removed from office to make way for Muslim clerics who say (on rec.ord in the documentary, that secular law is not important and religious law is paramount

“The support shown by the ruling elites for the Islamisation of the west is more apparent in the unequal application of law, with far harsher sentences being handed out to Christian, Humanist or other persuasions than are imposed om Muslims for similar crimes.

Mainstream media are complicit in this of course, playing down the imbalance between criminality rates in various minority communities. As Marcus Tullius Cicero said over 2000 years ago, “Ever since our ancestors came out of the hills and forests to live as civilized men, it has been understood there can only be one law and it must apply equally to all.”

UK: Muslim gets 1-year “community order” for “appalling damage” of church, non-Muslim got prison for bacon at mosque

We have reported before on The United Nations (UN), a supra – national organisation made up of elitists appointed by other elitists, overreaching its mandate and trying to act as a global government, imposing policies that nobody voted, formulated by bureaucrats that nobody voted for, for on the sovereign nations of the world.

Here’s the latest example of this globalist authoritaianism and it is probably the most worrying yet for citizens of the democratic nations. The UN is planning to impose a global ban on telling the truth about Islam, because hearing the brutality of Islamic dogma described in detail upsets Muslims apparently:

Nations belonging to the Organization of Islamic Cooperation (OIC) and other governments adhering to Shariah law across the world are ramping up their new campaign with the United Nations to prohibit all speech that Muslims consider offensive.

“Islamist nations … long have sought a determination from the United Nations that any criticism of Islam or Muslims is ‘Islamophobia’ and banned globally,’” WND reported, noting that with 57 members, the OIC represents the largest voting bloc in the U.N. “But each time it has come up for a vote, more realistic arguments prevailed and the campaign never was legitimized.”

After U.N. Secretary-General Antonio Guterres unveiled the new “U.N. Strategy and Plan of Action” to fight so-called “hate speech” at a special meeting in the packed Economic and Social (ECOSOC) chamber, Pakistan Ambassador Maleeha Lodhi incited more support to silence any opposition to Islam and its adherents – including speech condemning Islam for its scriptural inciting of terrorists to conduct jihad (holy war) on “infidels.”

“An inevitable consequence is to fan the flames of bigotry, intolerance, anti-Muslim hatred and xenophobia,” Lodhi proclaimed before ambassadors, senior diplomats and high-ranking U.N. officials, as quoted in a press release, according to MSN. “My Prime Minister Imran Khan has recently again called for urgent action to counter Islamophobia, which is today the most prevalent expression of racism and hatred against ‘the other.'”

Guterres said the overarching goal of the U.N. plan is to identify, prevent and confront what the U.N. and Islamic nations consider “hate speech.”

MORE ON ISLAM (catalogue of posts in our archive)
Islam’s cultural conflict with the west
Nigerians describe horrors of Islamic atrocities: ‘There is a genocide going on’
US Lobbying Group Accuses UK of ‘Attempting to Silence Criticism of Islamism’
Chechen Islamic Police Now Enforcing Sharia Law On Streets Of Berlin
Media Silence Surrounds Muslim Massacre of Christians

News feeds are telling us that earlier today (Sunday) a terror attack was made on a bus full of tourists travelling to see the Pyramids at Giza, near the Cairo, the Egyptian capital. Egyptian official news sources said the blast wounded at least 16 people, with no reports of fatalities so far.

The Egyptian government described the attack as having been by means of a roadside bomb placed on a heavily used stretch of road that in the tourist season is packed with busloads of sightseers en route to the famous World Heritage site, which leads security forces to believe it is the work of Islamic extremists intent on crippling Egypt’s vital tourist trade — the second to target foreign visitors to the pyramids in under six months.

in December an explosion ripped through a tourist bus in Al-Haram area south of Cairo, which killed two and left a dozen injured, in what was the first such attack in two years.

Eye witness reports suggest the bomb was a relatively small explosive device, and photographs of the aftermath show the bus suffered impact damage, but is intact.

Some of the wounded were foreign nationals, according to Mohammed El-Saghir, head of police investigations in Giza’s al-Haram neighborhood. The blast occurred in front of a museum that’s under construction, and there was not immediate claim of responsibility.

In the hours following the incident, reported numbers of injured people rose to 18, with police saying they’re attempting to track the source, which a number of reports have linked with Islamic militant groups engaged in a long running conflict with Egypt’s security services.

Election fraud has been allowed to take place in Muslim communities because of “political correctness”, a major report finds as it calls for unprecedented reforms to the British voting system.

In a report commissioned by the Government, Sir Eric Pickles, the former Conservative Cabinet minister, today warns that the authorities are in a “state of denial” and are “turning a blind eye” to election fraud.

He said that there is evidence of voter fraud “especially in communities of Pakistani and Bangladeshi background” but that the cases have been ignored because of “over-sensitivities about ethnicity and religion”.

Sir Eric warns that “challenging issues” over community cohesion should never be an “excuse” for failing to “uphold the rule of law and protect British liberties”. 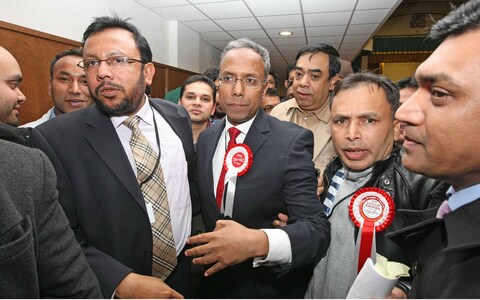 Sir Eric’s report makes a series of recommendations to Theresa May, the Prime Minister, and calls for people to require identification when they are voting and for police cordons around polling stations to prevent intimidation.

Electoral Fraud Scandal In Peterborough By – election Being Covered Up?
Thanks to Politicalite’s groundbreaking exclusive coverage of the crooked Peterborough By-Election so far, the Daily Mail have picked up on our story and have revealed a fresh incident of alleged electoral fraud being investigated by the Police …

A search operation has been launched to arrest a Maulvi (Chief Islamic Cleric) of Vavuniya and Chettikulam divisional mosques who released a eight-minute long video clip via internet justifying the Easter bomb attacks on Sunday, Sri Lanka Mirror reported.

Vavuniya police announced that they plan to arrest the Maulvi for justifying the horrific terror attack. 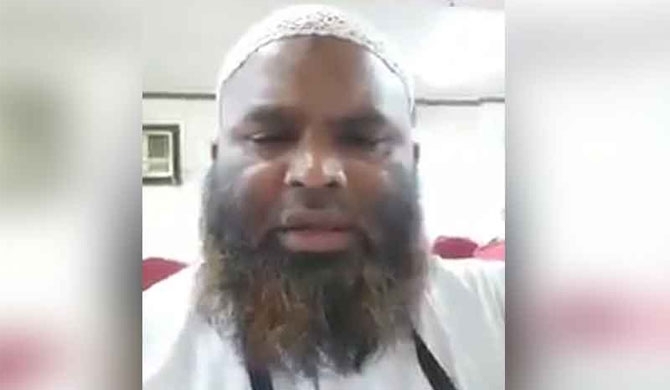 Maulvi Munajit – He ate all the pies, but they weren’t pork pies (Picture: Sri Lanka Mirror)

When as ISIS had claimed the responsibility of this attack, the Tamil speaking Maulvi Munajit, who wields considerable influence in Vavuniya region and has a significant social media footprint, released an incendiary video. Maulvi Munajit is said to have close ties to National Tawheed Jamaat, the Islamic terror organisation suspected to be behind the Easter Sunday bombings.

In the video, after a cursory mention about the victims, Maulvi Munajit cites an example from the life of Muhammed to justify the terror attack. Maulvi is heard saying that the attack is a consequence of Muslims losing their patience. He cites the example of Mohammed who kept quiet for the first 13 years of Islam despite intense persecution from Quraysh people but then launched the battle of Badr. Maulvi also had said in the video that to build an Islamic state is just thing and the struggle has just commenced for that.

Several Tamil organizations in Vavuniya, angered by seeing the video, immediately reported it to the local authorities. The investigation is being currently done by the Chettikulam police.