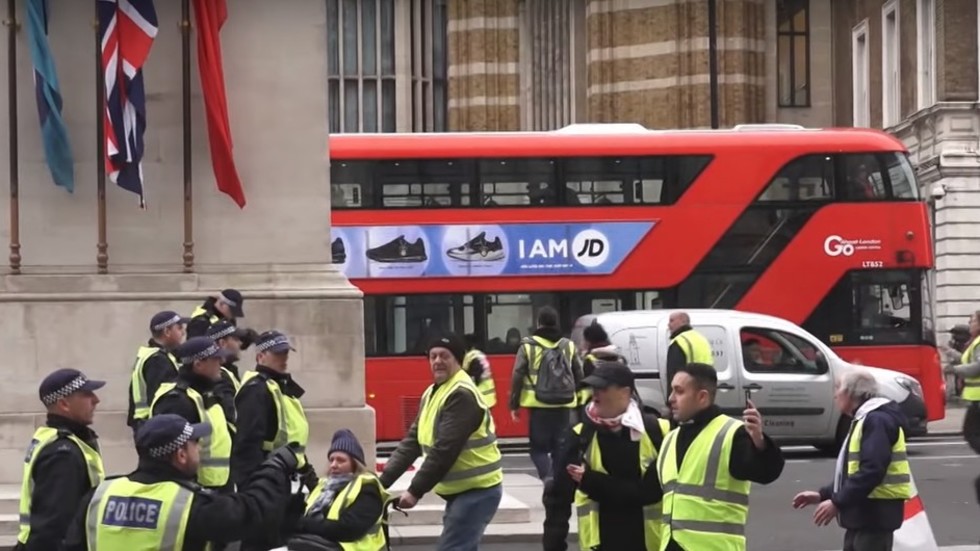 While mainstream media and the UK government Ministry of Propaganda organisation, BBC News, try to brant the UK’s Yellow Vests movement as ‘far right’ (anyone who is even slightly less fascistic than Chairman Mao is ‘far right’ according to modern, university brainwashed ‘anarchists,’ the people who put on their Yellow Vests to join British protests this weekend have embraced the ethos of the French movement by abandoning left – right name calling as both sides of the debate rally to the same symbol. This is not left versus right (a synthetic conflict engineered by propagandists and mainstream media,) and understood the battle is between the ruling elites and their cronies verus The People.

The Yellow Vests ceased to be a uniquely French phenomenon in mid December when protests took place in Netherlands, Belgium and other EU member states. Since then the movement has spread further afield with protestors in yellow vests taking to the streets in Egypt, India, Turkey, Canada and Australia. Before the Christmas break British protesters had started donning the distinctive high-visibility jackets to make their own (very different) points, but this weeken was the fiirst on which large scale demonstrations happened. In the UK, an array of left-wing movements vowed to use the yellow vest during their protests in favor of bringing down the Tory government and abandoning austerity. RT’s Polly Boiko explains. But this is where the similarities between the French and British factions end.

Far Right sand Far Left activists, some of whom belong to hardcore far-right groups like the English Defence League or Far left organisations like Aintifa or Unite Against Fascism, are also trying to capitalie on the hi – vis vest symbol of protest. They vent their anger at the Brexit deal stalemate, heckle politicians, and harass Muslims and Jews both online and offline. Such groups “who are trying to use anger and mobilize it against refugees and migrants and ethnic minorities are not welcomed in our demonstrations,” said Shabbir Lakha, spokesman for the anti-austerity People’s Assembly. He doesn’t seem to have a problem with people who harass Brext supporters, conservatives, Jews, or white people who stray into the wrong part of town of course.

May Nearing A Brexit Deal Breakthrough?

The UK Parliament is rumoured in some quarters to be nearing a breakthrough in negotiations that will enable an altered version of Prime Minister Theresa May’s sellout deal with the European Union to be accepted by elected representatives. It is thought a proposal by Graham Brady, leader of the Conservative rank and file (back benchers) which would throw out the hated ‘Irish backstop’