Germany: Vaccinated “Will Have More Freedom” as Unvaxxed Banned From Cinemas, Restaurants 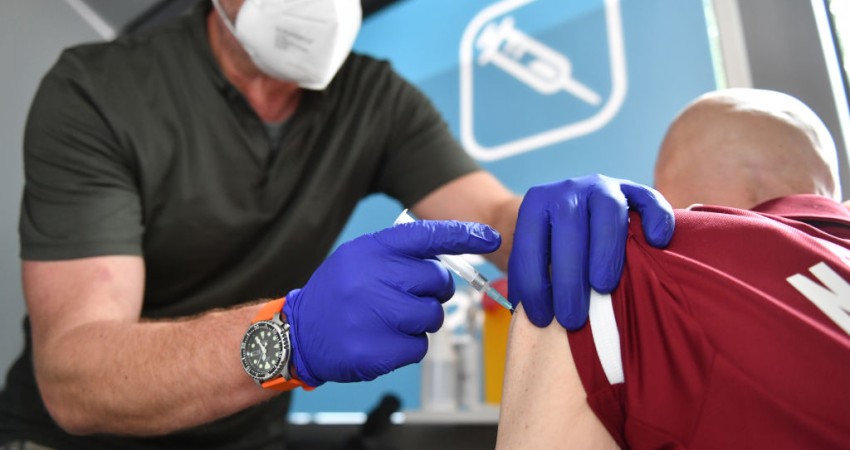 Authorities in Germany have indicated that unvaccinated people could be banned from cinemas and restaurants and that those who have taken the jab will have “more freedom.”

Angela Merkel’s chief of staff Helge Braun told Bild that if cases keep rising, new rules will be brought in that will ensure the unvaccinated are deprived of basic lifestyle activities.

“The number of new infections is increasing even faster than in the previous waves. That worries me very much,” said Braun.

“If we have a high rate of infection despite our testing procedures then the unvaccinated will have to reduce their contacts,” she added.

Braun went on to state that unvaccinated people, even if they test negative for COVID, would not be allowed to go to venues like restaurants, cinemas, or stadiums, because “the risk to everyone else is too high.”

Authorities are warning that Germany’s economy cannot handle a wave of people staying at home while urging employers to aggressively promote vaccination to their employees.

However, the deputy head of the Free Democratic Party, Wolfgang Kubicki, warned that such measures would mean the vaccination had been made mandatory, labeling it the de facto “introduction of compulsory vaccination through the back door.”

Germany’s ruling party split over how to respond to AfD
Germany’s Christian Democrat party (CDU) is as deeply divided as Britain’s Labour Party over how to respond to the upsurge of nationalism. Facing a serious challenge from the nationalist (but not far right please, they are not that,) Alternative for Germany party (AFD) the CDU seems pitifully unprepared for departure of the Chancellor Merkel at a point when Germany its facing most serious political and economic crisis for decades.

Merkel Successor Unexpectedly Resigns As CDU Leader In Latest Shock To Germany’s Political Establishment
After days of rumours as scandal erupted about a deal with right-of-centre AfD, Merkel’s anointed successor, Annegret Kramp-Karrenbauer – better known as AKK – has confirmed she will step down as the leader of Angela Merkel’s Christian Democratic Union that has ruled Germany for two decades, and won’t run as the party’s candidate to succeed Merkel during the federal election …

The Green Party in Germany is currently putting forward as a policy that up to 140 million “climate refugees” should be allowed to migrate to the west and given citizenship. The question of where we would put 140 million people and what we would do with them is of course deflected. And the case that the 50 million climate refugees that were predicted tTo descend on the west, having been displaced by rising sea levels are apparently all hiding under Harry Potter’s Cloak of Invisibility is ignored.

Germany Heading For Political Instability After EU Elections? it may be premature to write off the AfD because it is entirely possible their supporters suffered a bout of apathy with regard to the European Parliament, being aware the European Commission will not allow any nationalist grouping to gain influence in the parliament, the Left made some astonishing gains at the expense of Merkel’s CDU and its coalition partners the CSU and SDP. The always fragile coalition is now in even more trouble …

In this page, we have covered US attempts to expolit its position as issurer of the global reserve currency, and the moves by China and Russia to resist that. Moves to establish the US$ as a true global currency began a long time ago with the creation of the International Monetary Fund at the Bretton Woods conference in the final months of World War 2, with Germany defeated and the world ready to split into capitalist and communist factions…

German Alarm Grows Over EU Determination To Punish Britain For Leaving
The business community and conservative politicians in Germany are becoming more annd more hostile towards the way Brussels is trying to force the UK Parliament to accept the Brexit Withdrawal Agreement as a fundamental failure of European statecraft that can lead only to a diplomatic catastrophe and long term animosity between the EU and one of Germany’s largest expot customers.

German Alarm Grows Over EU Determination To Punish Britain For Leaving
The business community and conservative politicians in Germany are becoming more annd more hostile towards the way Brussels is trying to force the UK Parliament to accept the Brexit Withdrawal Agreement as a fundamental failure of European statecraft that can lead only to a diplomatic catastrophe and long term animosity between the EU and one of Germany’s largest expot customers.

EU Very Good for Germany, Not So Much for Everybody Else

Former Ambassador to Germany Sir Paul Lever said in an interview today that Brexit will have little real impact on the European Union (EU), which is overwhelmingly controlled by Germany. Short term he may be right, but with the German economy stalling what will prop up the Brussels cash burning machine one britain is gone?

Brexit has terrified ‘Brussels bubble’ – German insider The EU elite “lost faith in their own appeal and abilities” following the Brexit referendum vote and the surge in support for nationalist parties. The knee jerk response of the Brussels bubble was to try (and fail) to punish Britain for defing Brussels in the same way as they had punished small nations like Greece, Portugal and Ireland, which in their perception was the only way to prevent the EU breaking apart.

Germany Rejects Yazidi Asylum Seekers Fleeing Persecution By Islamic Extremists
The EU’s largest nation and most powerful economy, which righteously lecturs other EU member states on the need to take refugees and asylum seekers, is taking in fewer Yazidi refugees, according to a German newspaper report. The religious minority was terrorized by the “Islamic State” during the militant group’s campaign in Iraq and Syria and hundreds, possibly thousands of Yazidi women were raped and used as sex slaves by IsIS terrorists.

Politicians Are Offering A Trade, Safety For Freedom. But What Are We Really Trading Away?
It’s the age old confidence trick, politicians and the elites offter a straight choice between security of freedom and all the risks it entails, then amplify those risks with scaremongering propaganda. In the case of the COVID crisis it has worked so far, with enough people accepting the need for masks, lockdowns and killer vaccines to make The Great Reset seem feasible – but time is running out and people are waking up …

Getting To The Truth Of Covid?
A friend spent some time in hospital earlier this year, in September in fact. The problem was not COVID related and was easily dealt with by routine treatments. She was discharged and returned home thinking that would be the end of it. A few days later she could hardly walk and was complainming of fatigue and aching muscles and joints. As the weeks wore on things did not improve and on returning to the hospital for further tests she was told she might have picked up a case of “Long Covid.” Having trained and worked as a nurse she recognised this diagnosis as bollocks

Big Tech Ban President Trump, But Reveal Their Contempt For Free Speech And Diversity Of Opinion
As the Trump presidency enters its final week in the USA the haters are sharpening their knives and drooling at the prospect of taking revenge on Trump and his supporters for denying them the power they crave for four years …

“Big Brother State”: FBI Says Citizens Should Have No Secrets That The Government Can’t Access
The surveillance state predicted in George Orwell’s novel “1984” has gradually crept up on us. With no sense of irony, the government of the nation that calls itself “The land of the free” has led the way in trying to persuade citizents that the only way they can be sasfe from vague and largely fictitious “existential threats to democracy” is to surrender civil rights and freedom to determine our own destiny …

“Big Brother State”: FBI Says Citizens Should Have No Secrets That The Government Can’t Access
The surveillance state predicted in George Orwell’s novel “1984” has gradually crept up on us. With no sense of irony whatsoever the government of the nation that calls itself “The land of the free” has led the way in trying to persuade citizens that the only way to be safe from vague “existential threats to democracy” is to surrender our civil rights and freedom to determine our own destiny to Nanny State.

Secret Meeting in London to “End Cash”
Economist Martin Armstrong claims there is a “secret meeting to end cash” set to take place in London before the end of the month involving representatives from the ECB and the Federal Reserve. Armstrong, who is known for successfully predicting the 1987 Black Monday crash as well as the 1998 Russian financial collapse, expressed his shock that no news outlet has reported on this upcoming conference.

Prepare For The Worst Case Scenario
An article on the cashless society our political and corporate overlords are pushing for proposes that as far as privacy and individual liberty are concerned, what is being planned right now in the political capitals and financial centres of the world is the worst case scenarion. An all digital financial system would mean the end of privacy, nothing you bought or traded would be your own business any more …

Cashless Society: The Spy In Your Wallet
Back In 1971 Libertarians Were Predicting Debit Cards Would Become A Spy Tool For Authoritarian Governments. In 2013 The Wall Street Journal reported that the Naional Security Agency (NSA) was monitoring the card transactions of American citizens. Following that, two Senators, Wyden and Udall – who both sit on the Senate Intelligence Committee and thus have access to classified information about the government’s intelligenece gathering programs wrote …,/p>

Society is Sick with Validation Fever.

There is a meme going around for a while, its called Clown World, represented by Honkler, Pepe the frog dressed up as a clown, where everything is upside down and crazy. While it certainly works(and enraged the left), for me, it doesn’t hold as much weight as seeing the West as sick with Validation Fever.

How Mainstream Media And The Major Political Parties Are Making Sure Voters Do not Hear The Voices Of Politics’ Most Powerful Critics
As the General Election campaign starts to heat up, we try to shift focus away from the squabbling between Conservative and Labour about who can make the most promises they have no intention of keeping and to the real issues concerning jobs, social breakdown , mass immigration, and loss of national sovereignty.

US Presidents Of The Past warned Against Secret, Shadow Government. By now it should be obvious that peacemaker, joybringer and putative aquatic pedestrian Barack Hussein Obama was never really in charge of the US Government. Whatever Obama said would happen, all the American government’s policies ensured the opposit would happen. The embedded article thows some light on how the US government really works