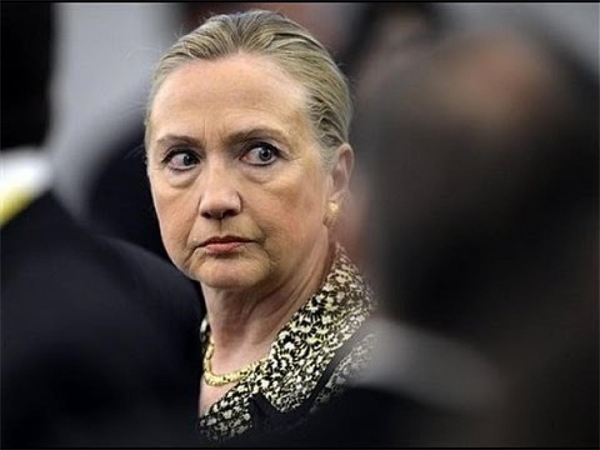 Hillary Clinton: as lacking in looks as she is in ability (Image source)

Hillary Clinton’s claim during the most recent Democratic candidates debate, that the Islamic State (ISIS) is “showing videos of Donald Trump insulting Islam and Muslims to recruit more radical jihadists” has been proved wrong. The latest Islamic State video brands Barack Obama a “liar” and Hillary’s own husband a “fornicator”), but neither mentions Trump not how ISIS fel about lesbianism.

Of more concern, however, is the fact that Hillary’s claim exposes one of the people most likely to be the next president of the United States as somebody who would dent her compatriots their right of free speech, the foundation of democracy, in order to appease the savages of ISIS.

In claiming that the Islamic State is using “videos of Donald Trump insulting Islam and Muslims to recruit more hostile jihadists” (as opposed, I guess, to friendly jihadists), Hillary’s implicit point is that if we stop saying and doing things that she or the Imsma claim offend Islam and Muslims, then jihad recruitment will lose its impetus.

So if we adopt Sharia blasphemy restrictions, start mutilating little girls vaginas and legalise wife beating, forced marriages and honour killings the jihadis will be our new best friends? Abd some people think this stupid old cow is fit to be President of the USA FFS?

Read more on this at PJ media

Servergate: Clinton Emails reveal how Google tried to help Obama Administration defeat Syria’s Assad
The unhealthily close relationship between Google and the US government has been known for a while, but despite having been caught in their incesteous coupling, the parent and child relationship seems to be getting more intense. The latest revelation from the Hillary Clinton emails shows how Google was involved in the bid to overthrow Assad in Syria

Servergate: Hillary Clinton arrogant, ignorant or both
Hillary Should Be Terrified After Judge Grants Staffer Immunity On Email Scandal