Skip to content
HomeMacron: ‘We Can No Longer Wait’ on Brexit

Le Petit Crapaud Emmanuel Macron, anxious it seems to stake his claim to be regarded as the champion of the ‘European Dream’ (the merging of all the sovereign states that make up the European Union into a single political , financial and cultural entity, in line with the ambitions of Adolf Hitler, Benito Mussolini, Josef Stalin and Napoleon Bonaparte, not to mention Grand Vizier Merzifonlu Kara Mustafa Pasha, because of course any reference to Islamic efforts to conquer Europe would open us to charges of ‘hate speech’ and Islamophobia.

Europe of course does not seem in any hurry to fall into line with this Franco – German bid for glory, in fact under the authoritarian stewardship of its previous champion Germany’s Angela Merkel, the European Union has been brought close to collapse.

Now, just a few days after the British Parliament had declared that Brexit bill had become a law, being signed into law by the monarch, Macron is pushing France’s claim to have replaced Germany as de facto main power of the EU

Previously, Macron reportedly stated that after the UK leaves the bloc, French language to become more important, as the English language won’t be so widely represented in Europe.

Britain is expected to leave the EU by the end of March 2019, but London claimed it was seeking for a two-year transition period in order to smooth out the withdrawal, as well as guarantees of a future relationship with the Union. 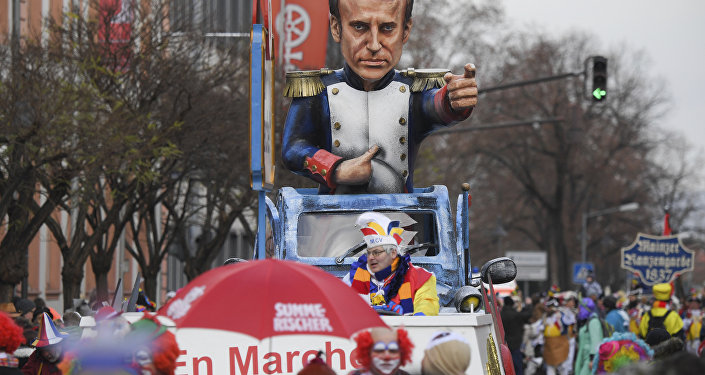 However, earlier this month the British MPs rejected a proposal, which would have forced Prime Minister Theresa May to negotiate to remain in the European Economic Area and thus continue to participate in the EU single market during Brexit talks.The United Kingdom voted to leave the EU in a referendum on June 23, 2016. Brexit negotiations between Brussels and London have officially started off in June 2017 and are expected to conclude by end of March 2019.